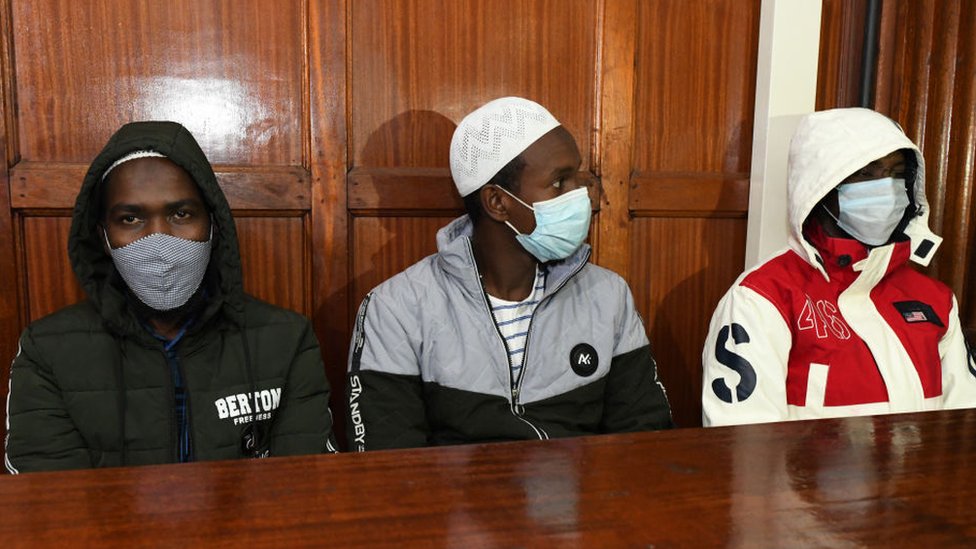 Publishedduration29 minutes agoimage copyrightAFPimage captionHussein Hassan Mustafa (left) and Mohammed Ahmed Abdi (right) were charged while Liban Abdullahi (centre) was found not guiltyA court in Kenya has found two men guilty of helping Islamist militants to attack an upmarket shopping mall in 2013. At least 67 people died in the assault by al-Shabab on the…

A court in Kenya has found two men guilty of helping Islamist militants to attack an upmarket shopping mall in 2013.

At least 67 people died in the assault by al-Shabab on the Westgate shopping complex in the capital, Nairobi.

The state said the four militants who carried out the attack were found dead in the shopping centre’s rubble.

The militants occupied the mall for four days, in one of the deadliest jihadi attacks in Kenya.

A third man was found not guilty on all counts of conspiracy to commit a terrorist act.

The trial is the only one so far over the Westgate shopping mall attack.

More than 140 witnesses testified in the case. The accused denied conspiring to commit terrorism.

The presiding judge ruled that the two suspects, both Kenyan citizens, will be sentenced on 22 October.

The BBC’s Ferdinand Omondi in Nairobi says their convictions will be welcomed in a country that remains on high alert over possible attacks by al-Shabab.

The al-Qaeda affiliate is based in neighbouring Somalia, and has carried out a series of attacks in Kenya.

Kenya has troops in Somalia to help fight the militants.

Who are the convicted men?

Mohammed Ahmed Abdi and Hussein Hassan Mustafa were charged with planning and committing acts of terror, as well as supporting and helping a terrorist group.

The third suspect, Liban Abdullahi, was found not guilty. The Somali refugee was also acquitted of the charge of being in Kenya illegally and possessing identification documents by false presences.

What happened at Westgate?

On a Saturday afternoon in September 2013, gunmen entered the mall and opened fired on shoppers, leading to a four-day siege.

“We were trying to calm people and tell them not to use their phones, or to keep them on silent. All the time we could hear gunfire. It was a war-like situation.”

When it was over days later, at least 67 people had been killed – 62 civilians, five security officers and the four attackers.

Al-Shabab said it carried out the attack in response to Kenyan military operations in Somalia.

Initially the authorities said there had been 10 attackers, but then revised the figure down to four. They said all of them had been killed but forensic tests on their remains have never been released.

Were lessons learnt from the attack?

Rivalry between police and military forces has previously been pointed out as a factor that hindered the response.

Since the attack there has been better co-ordination, correspondents say.

This helped in the response to the nearby DusitD2 hotel and office complex attack in January 2019, where 21 people died.