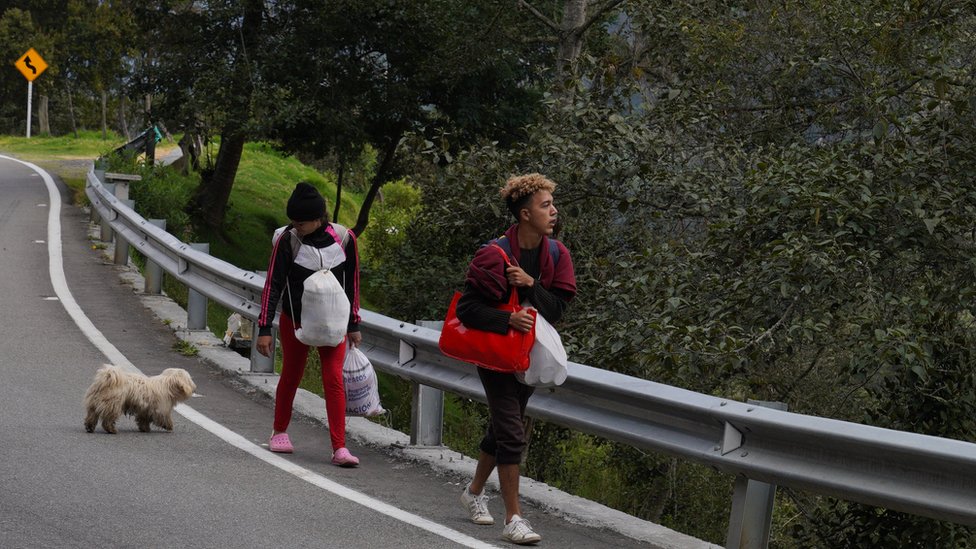 By Manuel RuedaPamplona, ColombiaPublishedduration2 hours agoimage captionÁngel Garcia and his partner Daniela Segueri had been walking for seven days since they left Valencia in VenezuelaÁngel García breathed heavily through his mouth as he hiked out of Pamplona, a scenic town nested in the Andes Mountains and located 2,300 meters above sea level.With his belongings stuffed…

Ángel García breathed heavily through his mouth as he hiked out of Pamplona, a scenic town nested in the Andes Mountains and located 2,300 meters above sea level.

With his belongings stuffed into a blue back-pack and a red gym bag that hung from his right shoulder, the 21-year-old was making a 1,600km (1,000 mile) trek to the Colombian city of Cali, where he was hoping to live with a cousin and find construction work.

“This has been brutal” said Mr García, who left the Venezuelan city of Valencia in the last week of September without any money for the bus fare. “Nobody wants to give us a lift here. Every day we are hungry and we’re cold.”

Mr García, who was travelling with his partner, said that he left Venezuela with about $1 (£0.75) in his pocket. It was all he could save from his job as a butcher, which paid about $10 a week.

Now he is among thousands of Venezuelans who are walking towards cities in Colombia, Ecuador and Peru as the economies of these South American countries pick up after almost six months of restrictions imposed to curb the coronavirus pandemic.

More than five million Venezuelans have left their country since 2015 according to the United Nations, with the poorest walking and hitchhiking for days along mountainous roads that connect cities like Bogotá, Cali, Quito and Lima.

But migrants say this route has become tougher and more dangerous since the pandemic broke out. And it is not just because of the lack of lorry drivers willing to provide free lifts.

In Colombia, shelters built along the main migrant routes have been forced to close by municipal governments trying to avoid large indoor gatherings.

Land border closures imposed by the governments of Colombia, Ecuador and Peru meanwhile, have forced many migrants to turn to criminal groups that control illegal border crossings.

“I was in a group of four people and we paid 160,000 pesos ($45; £32) to cross the border” said Verónica Gómez, a Venezuelan dental assistant who arrived in Colombia in September and was attempting to hitchhike to Peru.

“They call it a collaboration but it’s just an elegant way of charging you” her son, Yurfran said.

Venezuelan migrants walking along the road that leads out of the Colombian border city of Cúcuta said they paid fees of anywhere from $1 to $20 to groups controlling illegal border crossings, while those without cash paid by “donating” their mobile phones.

David Smolanksy, the commissioner for Venezuelan migrants and refugees at the Organization of American States, said that border closures could have even more severe consequences for desperate migrants.

“These Venezuelans who take the illegal crossings expose themselves to recruitment from armed groups” he said in a news conference. “They can also be kidnapped or assassinated.”

The closure of shelters meanwhile, has been particularly tough on migrants travelling with children.

In Pamplona, at least 100 Venezuelan migrants sleep on pavements each night, braving night-time temperatures that can reach 5C (41F).

Some said they had been stranded in the small town for days and would not leave until they received money transfers from relatives for bus tickets. Others waited to get a ride that would take them beyond the Páramo de Berlín, a plateau located at 4,000m (1,300ft) altitude where night-time temperatures can fall well below freezing and migrants risk dying from hypothermia.

Before the pandemic, there were four shelters along the 120km road which leads out of Pamplona, climbs up to the plateau, and descends into the warm city of Bucaramanga. All of them are now closed.

“If the shelters were open we could try to walk through the páramo,” said Johan Guerra, a 42-year-old migrant who was travelling with his wife and his six-year-old child and was promised work at a coffee farm near Medellín. He had been sleeping on a pavement in Pamplona for three days.

But humanitarian groups said that since the pandemic started it has been difficult for migrants to get any sort of help.

“Some perceive migrants as people who might be infected with coronavirus, so there is more rejection towards them” said Giselle Pérez, a psychologist working for a project that helps migrants and is financed by Caritas France.

Every week her team drives along the road that leads out of Pamplona and hands out bags with energy bars, water and cold-weather gear.

“It’s harder now for migrants to get rides or even water from homes along the road” Ms Pérez said.

Despite these challenges the number of Venezuelan migrants entering Colombia appears to be increasing.

Social workers in Pamplona recorded more than 2,500 migrants passing through the town in September, although that does not include those who get there on buses.

Colombian immigration officials said in September that they expect 200,000 migrants from Venezuela to arrive in the country before the end of this year.

The Colombian government says that at the beginning of the pandemic approximately 100,000 Venezuelans returned home after losing their jobs.

But with the minimum wage in Venezuela currently worth $2 a month, there is a big incentive to migrate to Colombia and other South American countries, where basic wages are about 100 times higher.

“Life was unaffordable in Venezuela” Mr García said. “I would spend all my salary on a kilo of rice, some flour, eggs and cheese.”