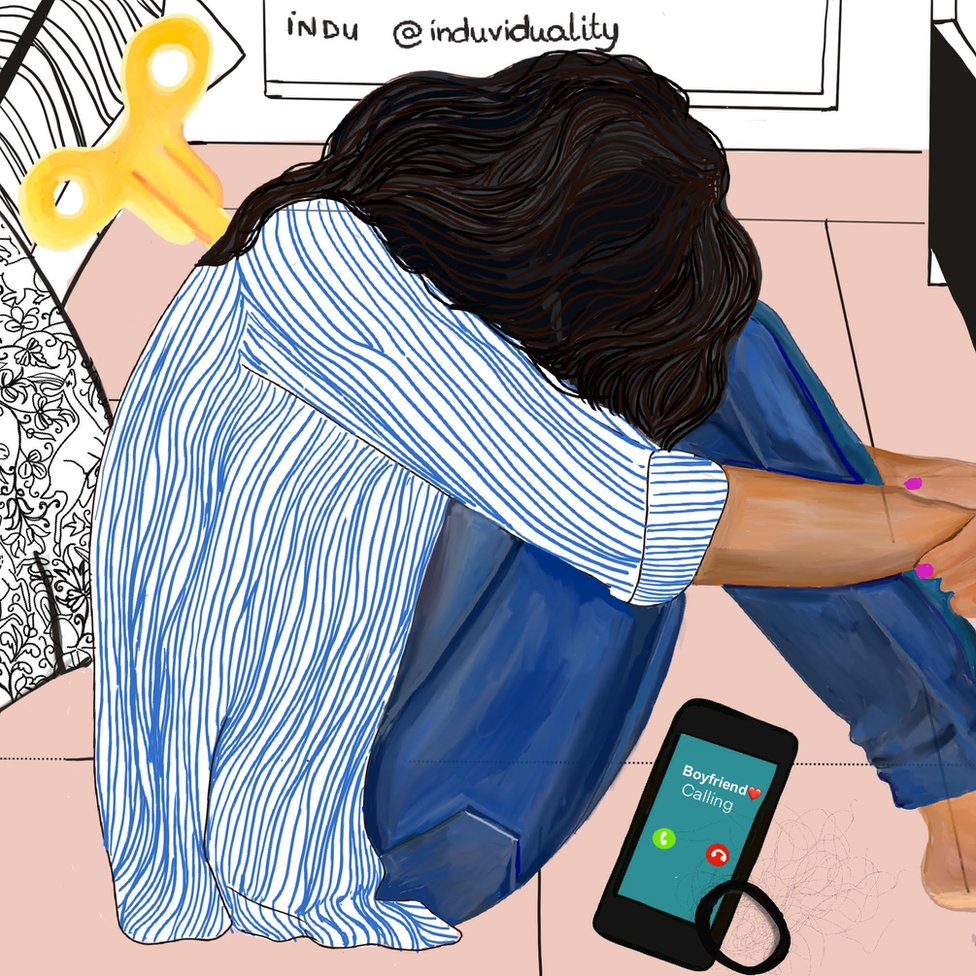 By Geeta PandeyBBC News, DelhiPublishedduration1 hour agoimage copyrightIndu HarikumarYears ago, when Indian artist Indu Harikumar fell in love, she thought it was the perfect romance.But within months, the live-in relationship began to unravel – there were frequent fights, mostly over what she was posting on the internet.”I had no idea what would trigger him. Whenever…

Years ago, when Indian artist Indu Harikumar fell in love, she thought it was the perfect romance.

But within months, the live-in relationship began to unravel – there were frequent fights, mostly over what she was posting on the internet.

“I had no idea what would trigger him. Whenever I would share a photo or a selfie on social media, he would get upset about who’s liking my photo, who’s commenting on it,” Ms Harikumar told the BBC.

Since she didn’t want to make him angry, she trimmed her friends’ list, unfriended her exes and restricted access to male friends.

“Even when he was not present, I was thinking for him – before putting a post, I was trying to anticipate how he would react? Soon, I was putting the same restrictions on my life offline too. I was walking on eggshells.”

But that didn’t help – he still found things to get angry about.

“One day, he got upset by a random tweet that someone had put out saying ‘I’ll do anything for a person with a nose stud’. A friend with a sizeable number of followers tagged me and commented, ‘Then you should look at Indu.’

“I had not seen the tweet, but my partner sent me a message saying ‘you have pimps in high places’,” she says, adding that it was not the only abuse she’d faced online.

Ms Harikumar’s latest crowd-sourced Instagram art project – LoveSexandTech – draws from her own personal experiences and those of other women of “online abuse”. It’s supported by Take Back the Tech, a global campaign to make digital space safer for women.

Online abuse is pervasive globally and a lot of it is directed at women. They are trolled for their politics or opinions, many often complain of receiving threats of rapes and sexual assault.

In 2017, Amnesty International polled 4,000 women from eight countries and found that 76% of women who were abused on social media restricted their use – 32% said they had stopped expressing opinions on some issues. In India too, the report said, that increasing access to the internet had resulted in more women facing online abuse for participating in public life and sharing their opinions on social media platforms.

But the nameless, faceless trolls are one thing, a much bigger problem is how does one deal with abuse from their loved ones?

That is what LoveSexandTech is documenting – how gender-based violence in intimate relationships leads to a shrinkage of the space women occupy online.

Ms Harikumar says when she first put out a post in August asking women to share their stories about “restrictions, surveillance and control placed by intimate partners”, she didn’t think she would get many responses.

She initially called her project Love, Sex and Violence but then “I realised that in India, a lot of violations are not even considered violence, especially the emotional ones”.

So, she spelt it out in greater details, explaining that “this could be anything from the threat to make a chat you shared with them public or with friends, threatening to leak your nude photos or leaking them, causing you emotional, physical or sexual harm for talking to someone online or posting something that they don’t approve of, or adding spyware to your devices”.

Within days, Ms Harikumar says, lots of women responded with their stories of having faced “gaslighting, control, slut-shaming, emotional violence and manipulation”.

“I didn’t think I’d get such a lot of stories,” she says, adding that many women said they had suppressed their trauma for long and found that sharing their stories was “cathartic”. At the same time, they wanted their stories to serve as a warning to others who found themselves in a similar situation.

One woman, who wrote in saying she was “very conscious of her body”, spoke about her shock on finding out that her lover had shared her nude photo online without her consent.

“Three weeks after he’d shared it, he showed it to me saying ‘hope you take it in the right spirit’. He was pleased that so many men said they desired me sexually.

“He said, ‘These men can only desire you, but I alone can have you.’ I called him a pervert. He said he did it because he wanted me to feel good about my body. But I felt so violated.”

Another wrote in saying she stopped posting selfies because every time she posted one, her boyfriend would berate her, telling her it was her way of seeking validation.

Yet another said her partner badgered her until she shared her email password with him saying “you’re hiding something or you’re talking to other men”.

And another woman said her partner used her thumb to unlock her phone as she slept and later shamed her over a video she had watched online.

Almost all the women, Ms Harikumar says, narrated experiences similar to her own – that in an attempt to make their relationship work, they’d stopped talking to their exes, deleted them from their friends’ list, and stopped posting selfies. They had also removed photos showing cleavage, or where they were smoking or drinking.

“They were deleting their history in an attempt to appear good. Most women take refuge in the ‘good girl narrative’. It’s universal – it keeps them safe. We are told women can only be of two kinds – Mother Mary or a slut.

“So, we think if we are good, things will pan out okay. We often blame ourselves when things go wrong.”

But what is heartening, she says, is that the women who “sent in their stories said they’d realised that they were being abused and stood up to their abusers”.

One woman wrote in about how she stood up to her ex-boyfriend when he threatened to send her photos to her dad. “I’ll tell him your daughter is a slut,” he said.

Another said her ex-boyfriend threatened to share her nudes online when she broke up with him. He backed down when she threatened to call the police on him.

“The worst thing is if you don’t stand up to your abuser, then more than feeling hatred for them, you feel anger towards yourself. You blame yourself for not standing up for yourself,” Ms Harikumar says.

Through LoveSexandTech, she says, she is trying to document stories of women acknowledging the abuse, standing up to their abusers, and taking back control of technology to reclaim the virtual space that is rightfully theirs.