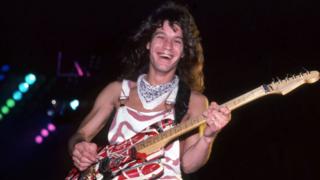 Image copyright Getty Images Image caption Many of Van Halen’s biggest songs were played on Eddie’s home-made “Frankenstrat” guitar Eddie Van Halen, who has died at the age of 65, opened up dozens of new possibilities for the electric guitar with his wildly inventive, and largely self-taught, techniques. Combining lightning-quick two-handed picking techniques with hammer-ons,…

Eddie Van Halen, who has died at the age of 65, opened up dozens of new possibilities for the electric guitar with his wildly inventive, and largely self-taught, techniques.

Combining lightning-quick two-handed picking techniques with hammer-ons, pull-offs, complex harmonics and an array of innovative devices he patented, the guitarist became a pole star for generations of musicians.

“Ed’s a once- or twice-in-a-century kind of guy,” his friend Jerry Cantrell of Alice in Chains said earlier this year. “There’s Hendrix, and there’s Eddie Van Halen. Those two guys tilted the world on its axis.”

Fellow guitar legend Joe Satriani reflected in 2015: “Eddie put the smile back in rock guitar at a time when it was all getting a bit broody. He also scared the hell out of a million guitarists because he was so damn good.”

The son of a Dutch band leader, Van Halen was originally a pianist, playing at weddings and bar mitzvahs with his family after they emigrated to Pasadena, California, in 1962.

A prodigious talent, he beat 5,000 students to first prize in a local piano recital for four years in a row, despite being unable to read a note of music.

“I fooled my teacher for six years,” he told Rolling Stone magazine in 1995. “He never knew. I’d watch his fingers, and I’d play it.”

In his teens, he switched to drums, then guitar, and formed his first band with his brother Alex in 1964. The Broken Combs made their debut one lunchtime in Pasadena Elementary School, and cemented the siblings’ desire to become professional musicians.

But it was watching Led Zeppelin at the Los Angeles Forum in the early 1970s that changed his guitar playing forever. A lightbulb went off as Jimmy Page played the solo from Heartbreaker, using both hands to tap out notes on the neck of the guitar.

For Page, it was an opportunity to showboat – but Eddie took the technique and refined it, enabling him to play a seemingly impossible flurry of notes and pinched harmonics.

“It’s like having a sixth finger on your left hand,” he explained in 1978. “Instead of picking, you’re hitting a note on the fretboard.”

The approach was so revolutionary that Alex encouraged his brother to play with his back to the audience so other bands wouldn’t steal it before Van Halen had a record deal.

Once their self-titled debut album was released in 1978, however, Eddie’s fellow guitarists were dazzled.

“It was beyond mind blowing,” said Ozzy Osbourne’s guitarist Zakk Wyld. “I’m going, ‘That can’t be a guitar. What is that?”

LA punk musician Phast Phreddie Patterson wrote in a 1978 edition of Waxpaper: “Edward wails his guitar like his life depended on it. Boyishly grinning… like a kid with a new toy, he tries to get as many noises out of his instrument as electronically possible. The results are unbelievable.”

‘No’ to long solos

Eddie never claimed to have invented the “two-handed tap” technique – classical guitarists had been using their picking hands to play notes their fretting hand would normally cover for years – but he did popularise it for the rock audience.

“And on top of that, I never really heard anyone do with it what I did,” he said in a 2017 interview. “Which was actual pieces of music.”

That, really, is the key. Eddie always prioritised melody and feeling over flamboyant technique. And while Van Halen’s material leaned towards hard rock, they always employed catchy hooks and memorable riffs.

Some of his best work was his most economical. On the chorus of Jamie’s Cryin’, he replies to David Lee Roth’s vocal (“Oh-oh-oh, Jamie’s crying”) with a simple two-note phrase that has all the taut precision of a Motown backing vocal.

On record, he even kept his solos short, structuring them like mini-movements within songs, with a defined beginning, middle and end.

“I haven’t heard anyone do a long interesting guitar solo outside of early Clapton,” he observed.

One exception comes on Eruption, from Van Halen’s debut album, which is simply 102 seconds of molten-hot finger work, as Eddie divebombs over the fretboard, incorporating both classical scales and his tapping technique.

The song was originally the guitarist’s warm-up exercise, but when producer Ted Templeman overheard it, he smartly realised it was worth showcasing.

“I played it two or three times for the record, and we kept the one that seemed to flow,” Eddie later recalled. “I didn’t even play it right. There’s a mistake at the top end of it. Whenever I hear it, I always think, man, I could have played that better.”

Always a perfectionist, he even outdid Michael Jackson. After being asked to play on 1983’s Beat It, Eddie not only recorded one of pop’s most memorable solos, he rearranged the song.

“I didn’t know how he would react,” Eddie told CNN. “So I warned him before he listened. I said, ‘Look, I changed the middle section of your song.’

“Now in my mind, he’s either going to have his bodyguards kick me out for butchering his song, or he’s going to like it. And so he gave it a listen, and he turned to me and went, ‘Wow, thank you so much for having the passion to not just come in and blaze a solo, but to actually care about the song, and make it better.'”

According to legend, Eddie’s 20-second solo on Beat It was so incendiary the speakers in the studio control room caught fire. In the heat, the seemingly insurmountable barrier between white rock and black pop was razed to the ground.

By the end of the 1980s, Van Halen’s fingerprints were all over rock music – but the star dismissed many of his acolytes as “typewriter players”.

“They all play as fast as they can, as loud as they can, scream as high as they can. But they don’t even scream or play fast with a unique quality,” he said in 1985. “It leaves me cold.”

But while his playing style launched thousands of imitators, it wasn’t Eddie’s only innovation.

In 1985, he patented a device that allowed musicians to sling a guitar around their necks and lock it into a horizontal position to “create new techniques and sounds previously unknown to any player”.

He also created a new type of guitar head and invented a device, known as the D-Tuna, that helped guitarists to switch between alternate tunings on the fly. Along with guitarist Floyd Rose, he even created a whammy bar that worked without leaving the strings out of tune.

Speaking to Popular Mechanics in 2015, Eddie said he had “always been a tinkerer” and started modifying his own instruments out of necessity.

“My playing style really grew from the fact that I couldn’t afford a distortion pedal. I had to try to squeeze those sounds out of my guitar… so I started hammering away with a screwdriver.”

Eddie’s custom-made guitars gave Van Halen a unique tone and sound, while his famous Shark – which was cut into a ‘Flying V’ with a chainsaw – prompted dozens of aspiring guitarists to vandalise their instruments.

His souped-up “Frankenstrat” even featured in an exhibition at New York’s Metropolitan Museum of Art last year.

“Nobody taught me how to do guitar work: I learned by trial and error,” he told Guitar Player magazine. “I have messed up a lot of good guitars that way, but now I know what I’m doing, and I can do whatever I want to get them the way I want them. I hate store-bought, off-the-rack guitars.”

The handicraft was evidence of an almost obsessive drive to conjure up the sounds Eddie Van Halen heard in his head. It probably didn’t make him easy to work with – the band’s internal politics and shifting line-ups were beyond complicated – but his love for, and impact on, rock music are hard to underestimate.

“When I’m home on a break, I lock myself in my room and play guitar,” he told Guitar World in 1981. “After two or three hours, I start getting into this total meditation. It’s a feeling few people experience, and that’s usually when I come up with weird stuff. It just flows.

“If you’re a musician you just play until you die. It’s not an ordinary job.”