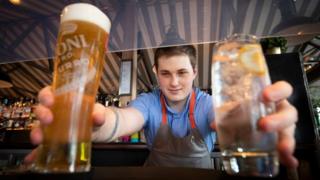 Image copyright PA Media All pubs and restaurants across central Scotland are to be closed under new measures aimed at tackling a surge in coronavirus cases.The new rules will apply to licensed premises across the central belt, including Glasgow and Edinburgh.Pubs and restaurants will be able to open in other parts of Scotland – but…

All pubs and restaurants across central Scotland are to be closed under new measures aimed at tackling a surge in coronavirus cases.

The new rules will apply to licensed premises across the central belt, including Glasgow and Edinburgh.

Pubs and restaurants will be able to open in other parts of Scotland – but can only serve alcohol outdoors.

The new rules, which will be in force from 18:00 on Friday until 25 October, apply to about 3.4 million people.

First Minister Nicola Sturgeon said the restrictions were “intended to be short, sharp action to arrest a worrying increase in infection”.

But she admitted that they would be disruptive to many businesses and would be unwelcome to many people.

The licensed trade had warned ahead of the announcement that many pubs and restaurants would be forced to close for good if any further restrictions were imposed on them.

And opposition parties have called for more detail on a £40m support package for affected business that was announced by Ms Sturgeon.

The restrictions for the central belt cover people living in the Greater Glasgow and Clyde, Lanarkshire, Forth Valley, Lothian and Ayrshire and Arran health board areas.

In these areas, all licensed premises – with the exception of hotels for residents – will be required to close indoors and outdoors, although takeaways will be permitted.

Cafes which do not have an alcohol licence will be able to stay open until 18:00.

Snooker and pool halls, indoor bowling alleys, casinos and bingo halls will also close in the five health board areas for two weeks from 10 October.

And contact sports for people aged 18 and over will be suspended for the next two weeks – with an exception for professional sports.

Indoor group exercise activities will not be allowed, although the current rules will remain in place for under 18s and gyms can remain open for individual exercise.

Outdoor live events will not be permitted in any of the five regions for the next fortnight.

There will be no travel ban in any of the areas, but people in the central belt have been urged to avoid public transport unless it is “absolutely necessary”.

And they have also been advised not to travel outside of the health board area they live in if they do not need to.

Throughout the pandemic Scotland has tended to adopt a slightly more cautious approach than England.

It has imposed more restrictions and lifted them more slowly in general. The latest move is in line with that trend.

There is little difference in overall infection rates. Scotland has seen 85 cases per 100,000 in the past week, compared to England’s 109.

The measures imposed by the Scottish government are focussed on areas with the highest infection rates.

But those places are some way below the levels seen in England’s hotspots.

Cities such as Liverpool, Manchester and Newcastle have seen around 500 cases per 100,000 people over the past week – that is more than twice the level of infection in Glasgow for example.

But the differences between the two nations should not mask the growing concern there is in England about the infection rates, particularly in the north of country.

Senior ministers and their advisers are today discussing whether extra steps are needed south of the border.

The problem is action to supress the virus has negative consequences too.

This much can be seen in the growing number of scientists and health experts who are signing the Great Barrington Declaration warning about the impact of Covid lockdown policies.

In other parts of the country, pubs, bars, restaurants and cafes will be able to open indoors until 18:00 – but only to serve food and non-alcoholic drinks.

However, they will be able to serve alcohol in outdoor settings such as beer gardens until 22:00, with the current rules on no more than six people from two households remaining in place.

And the existing rules will continue to apply to weddings that have already been booked, and funerals, in all parts of Scotland.

It comes as Scotland recorded more than 1,000 new confirmed cases of the virus in a single day for the first time – although the country is doing far more testing now than at the height of the pandemic earlier in the year.

Speaking as she announced the new rules in the Scottish Parliament, Ms Sturgeon said the “vast majority” of pubs and restaurants had worked hard to ensure the safety of their staff and customers.

But she added: “Indoor environments, where different households from different age groups can mix, inevitably present a risk of transmission.

“That risk can be increased in some hospitality premises if good ventilation is difficult, and if it is hard to control the movement of people.

“And the presence of alcohol can of course affect people’s willingness to physically distance.”