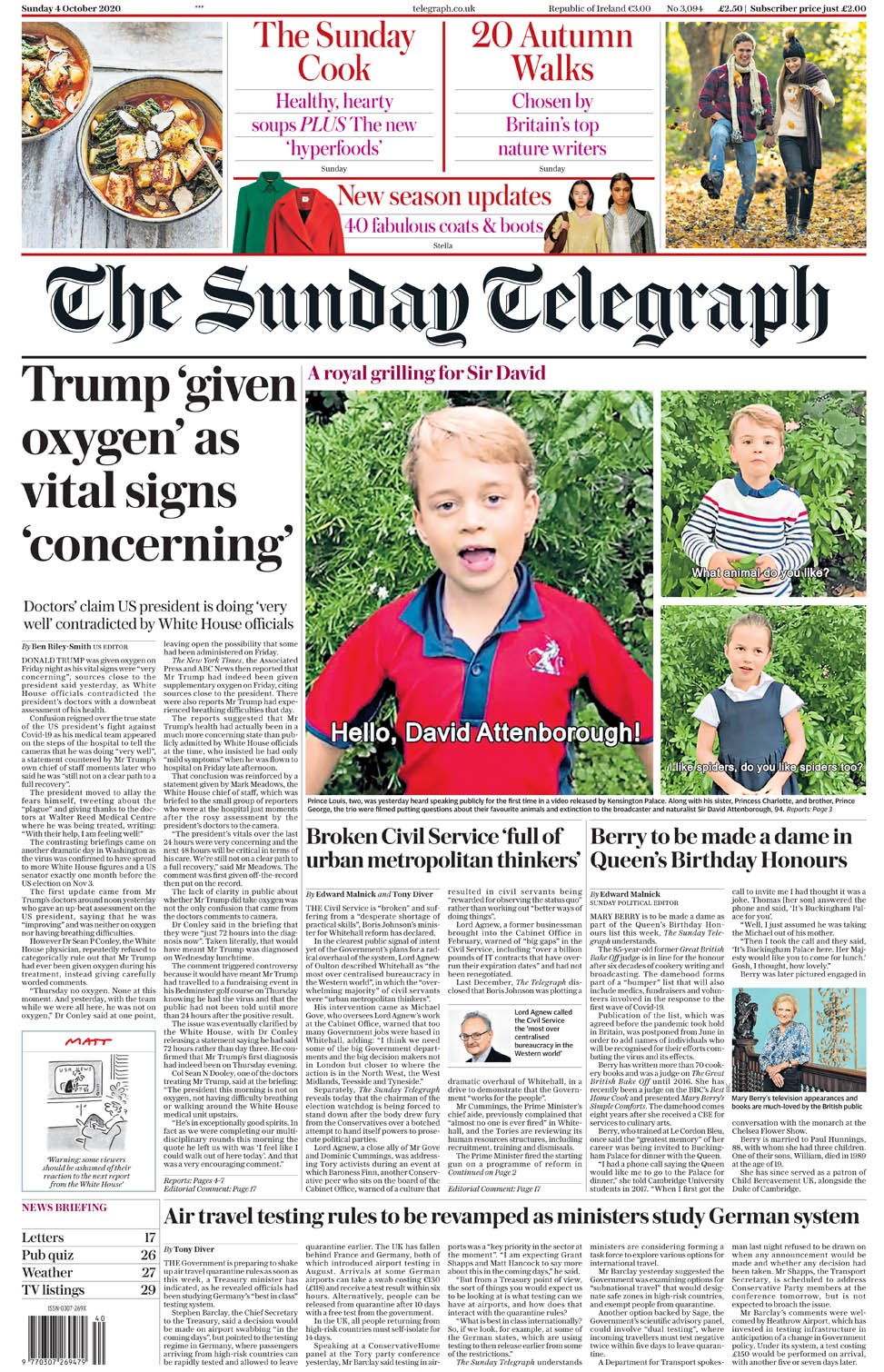 By BBC NewsStaffPublishedduration1 hour agoimage captionThe majority of Sunday’s papers are focused on US President Donald Trump’s health, following his coronavirus diagnosis. Officials have given conflicting reports on Mr Trump’s health, and the Observer says “confusion reigned” over his condition on Saturday night. The president’s doctors – pictured on the paper’s front page – have…

US President Donald Trump’s health is the main news for many of Sunday’s papers.

The Sunday Telegraph says confusion reigns over the true state of his condition because of the contradicting statements of his doctors and officials.

For the Observer, the briefing by his medical team raised more questions than answers. The paper also says Mr Trump’s coronavirus infection has given another dramatic twist to an already tumultuous and perilous US election year.

For the Sunday Times, it’s a twist that no political thriller writer would have dared to use on the grounds of credibility.

“If I took a script with this to Netflix”, the Mail on Sunday’s US editor writes, “they would laugh me out of the room”. She says the election is turning into an apocalyptic Hollywood movie without end.

A number of commentators write about Tory frustrations with Boris Johnson’s premiership.

Dan Hodges, in the Mail on Sunday, says his backbenchers have moved from despair to resignation – and given up waiting for the return of “the real Boris”.

Instead, they have decided the time has come to move around and beyond him, he says.

Julie Burchill – who voted Conservative for the first time last December – writes in the Sunday Telegraph that she never expected Mr Johnson to have a moral compass.

“But,” she adds, “I did expect him to possess a political sat nav rather than appear to be a Sunday driver at the wheel of an out-of-control juggernaut.”

In the Observer, Andrew Rawnsley says that like many voters, Tory MPs are now utterly fatigued by serial blunders, gaffes and zig-zags.

The Sunday Times reports that Britain’s biggest cinema chain, Cineworld, is set to close all its screens this week because big budget releases – including the new James Bond movie – have been postponed because of the pandemic.

According to the paper, Cineworld says the industry has become “unviable”. 5,500 jobs are at risk, though the paper adds that the cinemas are likely to reopen next year.

The paper also says that as families decide which relatives to invite to a smaller Christmas lunch – with no sign that the “rule of six” will be relaxed by then – turkey farmers face a dilemma: do they slaughter their birds early or put them on a diet?

It reports that farmers and butchers expect less appetite for bigger birds this year. But an executive of one butchers’ chain tells the paper she hopes festive customers will be “understanding” about the glut of big birds, and try to get some extra meals out of them.

“Because we’ve had a bad year,” she says, “they can celebrate over two days and have Christmas lunch twice.”

Finally, the Sunday Telegraph says it understands that Mary Berry is to be made a Dame in the Queen’s Birthday Honours List being published this week – postponed from June because of the pandemic.

According to the paper, the former Bake Off judge is in line for the honour after six decades of cookery writing and broadcasting. Quite right too, the paper’s leader column declares.

It says the Victoria sponge is a timeless British icon – and so too, is Mary Berry.