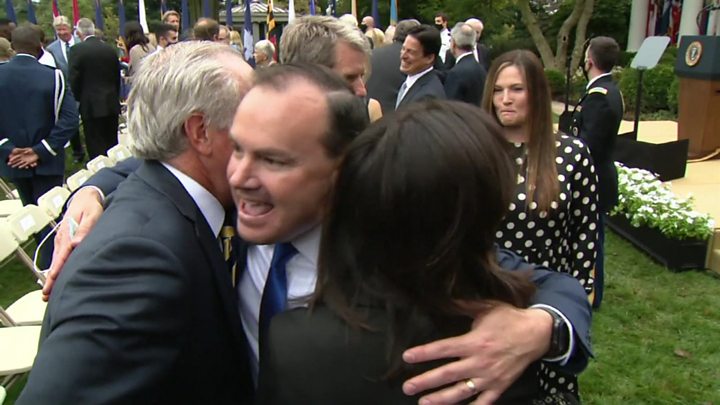 Media playback is unsupported on your device Media captionSenator Mike Lee, who later tested positive for Covid-19, seen hugging other attendees US President Donald Trump’s tweet on Friday confirming that he and his wife had tested positive for coronavirus shocked the world. With Mr Trump now in hospital, there are growing questions about how the…

US President Donald Trump’s tweet on Friday confirming that he and his wife had tested positive for coronavirus shocked the world.

With Mr Trump now in hospital, there are growing questions about how the pair were exposed to the virus.

A crowded Rose Garden event is coming under intense focus – last week’s ceremony where Mr Trump formally announced his nomination of the conservative Amy Coney Barrett for the Supreme Court. The World Health Organization says it commonly takes around five to six days for symptoms to start after contracting the virus.

Footage from the scene showed few attendees wearing masks. The seating was not set two metres (six feet) apart, while some bumped fists, shook hands or even hugged one another in greeting.

Seven people who attended are now confirmed to have the virus – although it is unclear exactly where and when they caught it. Aside from the president and the First Lady they are:

Mr and Mrs Trump tested positive after the president’s communications director, Hope Hicks, contracted the virus. She did not attend the Rose Garden event.

Guidelines published by the Centers for Disease Control recommend six feet of distance between people outside your home, and covering your nose and mouth when others are around you.

Dozens of lawmakers, family members and staff from the White House were at the event. Those who have tested positive were seated in the first few rows of the packed crowd.

The president stood next to Amy Coney Barrett as she delivered her speech. Ms Barrett tested negative on Friday, according to a White House spokesperson.

Vice President Mike Pence and his wife Karen also tested negative. Mr Pence sat across the aisle from Mrs Trump at the ceremony.

Attorney General William Barr sat in the same row as the vice president. A Department of Justice spokesperson announced on Friday that Mr Barr had tested negative.

Some of the event last Saturday also took place inside. One CNN reporter tweeted a photo of people in the White House.

Johns Hopkins University coronavirus trackers say that 7.3 million people in the US have contracted the virus, the highest figure in the world.

The country also has the highest death toll, with more than 208,000 people killed.