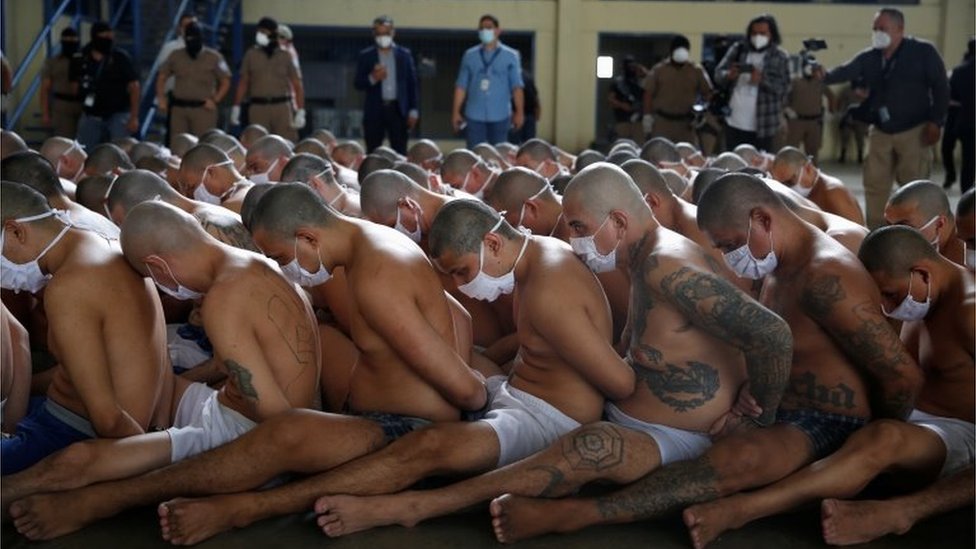 By Will GrantBBC Central America correspondentPublishedduration8 hours agoimage copyrightReutersimage captionEl Salvador’s government wants to show it has not given any special treatment to gang membersEl Salvador’s jailed gang members will see “not one ray of sunshine”, said the country’s prisons director, Orisis Luna Meza, in April. He was describing the latest phase in the government’s…

He was describing the latest phase in the government’s hard-line security policy, the “Plan for Territorial Control”, which imposed stricter, more inhumane conditions in the country’s maximum-security prisons.

Natural light would be shut out from the inmates’ cells, family visits were banned and prisoners from two rival gangs – the MS-13 and Barrio 18 – would be housed together, mortal enemies living cheek-by-jowl in the heavily overcrowded cells.

Images of hundreds of half-naked, shaven-headed prisoners shackled together in the prison yards amid a worsening coronavirus outbreak sparked outrage among international human rights groups.

‘Show me one privilege’

Today, the government is not concealing the appalling state of its prisons but showing them off again, openly inviting journalists to film inside the dank, unsanitary cells.

“Show me one privilege, just one” the prisoners had received, President Nayib Bukele wrote on Twitter, his favoured form of communication.

The president’s belligerent tweets followed allegations in the high-profile online journal, El Faro, that his administration had held secret negotiations with gang leaders inside jail.

The gang leaders were said to have ordered their members on the outside to reduce the levels of violent crime which blight El Salvador’s communities, particularly murder and extortion.

El Faro also made the potentially explosive claim that the Bukele administration had sought the gang’s support in legislative elections next year.

“I totally deny that these meetings happened,” Director of Prisons Osiris Luna Meza said about the allegation that he was present at the meetings along with several unidentified masked men.

“I have not and will not participate in any such meeting. I have always been very consistent with my political activities. These kinds of activities aren’t who I am,” he told me via Skype.

So far, the government of Nayib Bukele has robustly denied the content of El Faro’s report but stopped short of saying the documents were fake.

I pushed Mr Luna Meza three times to unequivocally state that the documents were false but, on each occasion, he prevaricated.

“Beyond any documents which may or may not exist, here we deal with concrete facts,” he said.

“If the article says that some kind of truce exists between the government and the gangs, that they have received benefits, you can see that is not true.”

The prisons’ director confirmed that he would resign if the Attorney General’s office, which is currently investigating the claims, confirmed the allegations.

President Nayib Bukele has a fractious relationship with the press, in particular with El Faro.

He tweeted that “one can be fat or thin, but not fat and thin at the same time”, implying that he could not be criticised for abusing the gang members’ human rights in April yet accused of making a pact with them in September.

“That was the last tweet I saw before the president blocked me and everyone else on the investigations team,” says Carlos Martínez, a journalist at El Faro who worked on the article.

Martínez is confident the attorney general will confirm El Faro’s investigation and stressed the newspaper’s “total confidence in the veracity of the documents we published”.

“They came from a completely reliable source and we also verified their authenticity. It is very difficult for the government to deny their own documents.”

The allegations are certainly uncomfortable for El Salvador’s controversial leader. El Faro says that since their investigation was published, the government has targeted them with financial audits and personal attacks.

It has prompted concern as far as the United States, with Democrats on the House Foreign Affairs committee in Washington writing to President Bukele saying they were “alarmed” and “extremely troubled” by his response.

Nayib Bukele has always portrayed himself as uncompromisingly tough on the gangs, going all the way back to his time as mayor of El Salvador’s capital, San Salvador.

He calls gang members “terrorists” and has pushed for them to face terrorism-related charges.

He has cast himself as a non-conformist politician, a maverick who wears his cap backwards and communicates through his prolific use of social media.

His critics accuse him of being the worst kind of Latin American populist and autocrat. But so far, his tactics appear to have worked for him incredibly well – polls suggest he has a public approval rating of around 90%.

With legislative elections due early next year, there is much riding on the attorney general’s investigation.

If it backs El Faro, the recent drop in violence in El Salvador would be a result of something President Bukele had roundly criticised previous administrations for, namely negotiating with the gangs.

Worse still for the president is the suggestion such talks were held in the pursuit of votes. His image as a self-styled strongman may not survive that level of scandal.