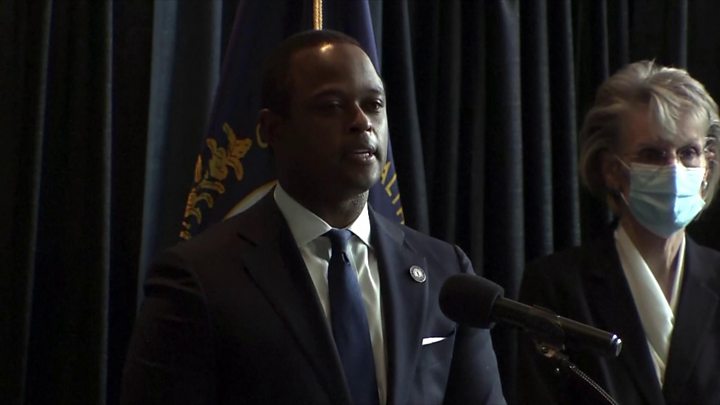 Image copyright Reuters Recordings from the grand jury investigation into the Breonna Taylor police shooting case have been released in a rare disclosure.Some 15 hours of audio were made public on Friday, following a lawsuit.The recent decision not to charge any officers for Ms Taylor’s 13 March killing renewed outcry over racial inequities.Unrest gripped Ms…

Recordings from the grand jury investigation into the Breonna Taylor police shooting case have been released in a rare disclosure.

Some 15 hours of audio were made public on Friday, following a lawsuit.

The recent decision not to charge any officers for Ms Taylor’s 13 March killing renewed outcry over racial inequities.

What’s in the tapes?

With roughly 15 hours of audio released on Friday, not all the details have yet been reviewed.

But early reviews of the tapes reveal testimony from at least two Louisville police officers who said that they knocked several times and announced themselves as police before entering Ms Taylor’s apartment.

“So it was the third time that we were approaching, it had been like 45 seconds if not a minute,” Mr Hoover said. “And then I said, ‘Let’s go, let’s breach it.'”

The officers were so loud, one testified, that a neighbour came outside saying something like “Leave that girl alone,” Sergeant Jonathan Mattingly said.

Whether or not the officers announced themselves before entering has been questioned by Ms Taylor’s boyfriend, Kenneth Walker, and a number of her neighbours. Mr Walker, who fired at police, said he did so in self-defence, believing the officers to be intruders.

In a police interview played for the grand jury, Mr Walker said that they had not heard police identify themselves before they entered her apartment. If they had, “it changes the whole situation because there was nothing for us to be scared of,” he said, according to the Associated Press.

Officer Myles Cosgrove – who the FBI said fired the shot that killed Ms Taylor – described a chaotic scene to investigators, in which he was “overwhelmed with bright flashes and darkness”, and seemed confused by the precise order of events.

When police entered the apartment, they encountered a figure who looked as if he or she was holding some type of long gun, said officer Brett Hankinson in a recorded police interview. Mr Hankinson has since been charged with wanton endangerment for firing shots into an adjoining apartment.

But Mr Wallace was holding a handgun, not a long gun.

Mr Wallace told investigators he was “scared to death” when he heard banging on the apartment door, the New York Times said. He said he fired one shot from his gun before he could see who was at the door.

“All of a sudden there’s a whole lot of shots,” Mr Walker said. “Next thing I know, she’s [Breonna’s] on the ground… And she’s right here bleeding. And nobody’s coming and I’m just confused and scared.”

Grand jury deliberations and prosecutor recommendations were not recorded, and so were not included in the released material.

What happened in the case leading up to the grand jury?

The death of Ms Taylor, an emergency medical worker, during a police raid in March has been a high-profile case, inspiring protests against police misconduct and racial inequality.

Ms Taylor was shot dead at age 26 when officers Brett Hankison, Jonathan Mattingly and Myles Cosgrove stormed her Louisville home. They were executing a search warrant as part of a drugs investigation, but no drugs were found on the property.

Last week, Mr Hankison was charged with wanton endangerment, but no-one was charged in connection with Ms Taylor’s death.

The decision not to charge any officer with murder or manslaughter has led to repeated Black Lives Matter protests in Louisville and elsewhere.

It also prompted questions over the handling of the case by Kentucky Attorney General Daniel Cameron, with critics calling for greater transparency.

Why were the tapes released?

Grand jury proceedings, in which evidence is presented to a selected body of jurors to decide whether charges should be brought in a case, are normally kept secret.

However, a juror sued for their release after Mr Cameron announced last month that none of the officers involved in Ms Taylor’s death would be charged for her killing.

Mr Hankison was charged with the minor felony crime of “wanton endangerment” for shooting into a neighbouring flat.

Following the announcement of the decision, the unnamed grand juror questioned public comments made by Mr Cameron, prompting the lawsuit.

The juror accused Mr Cameron of using the proceedings as “a shield to deflect accountability and responsibility”.

Ms Taylor’s family also demanded the release of the tapes.

A statement from the family and their lawyers said the grand juror’s actions supported their belief that Mr Cameron had misrepresented the jury’s deliberations.

“We urge the attorney general to release a complete and unedited copy of the recording, along with any and all evidence,” it read.

Mr Cameron agreed to comply with a judge’s orders to release the tapes, telling reporters: “Once the public listens to the recording, they will see that over the course of two-and-a-half-days, our team presented a thorough and complete case to the grand jury.”

His office filed a redacted version of the recording on Friday, with the personal information of those involved deleted. These edits removed nearly four minutes of audio, according to court documents.

What has happened in the case, and what’s next?

The city of Louisville agreed to pay the Taylor family a $12m (£9.3m) settlement, and Mr Hankison pleaded not guilty to the wanton endangerment charges on Monday.

If found guilty, he faces a five-year sentence for each of the three counts.

He was fired from the Louisville Metro Police Department in June.

The two other officers who took part in the raid – Jonathan Mattingly and Myles Cosgrove – were reassigned to administrative duties.