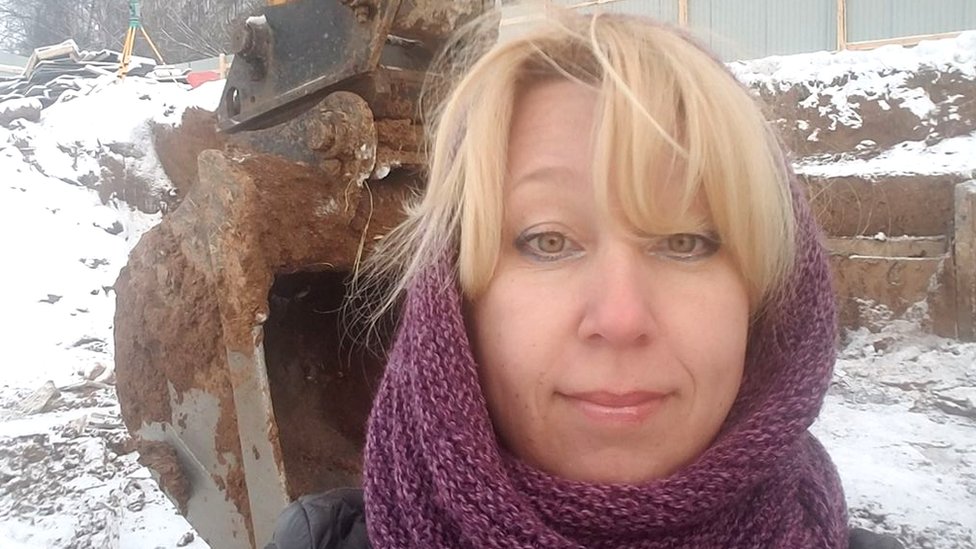 A Russian news editor has died after setting herself on fire in front of an interior ministry office in the city of Nizhniy Novgorod.

Irina Slavina earlier wrote on Facebook: “I ask you to blame the Russian Federation for my death.”

Authorities confirmed her body had been found with severe burns.

Slavina said on Thursday police had searched her flat looking for materials related to the pro-democracy group Open Russia. Computers and data were seized.

Footage has emerged apparently showing the moment she set herself on fire on a bench in Gorky Street, where the interior ministry in Nizhny Novgorod is situated.

In the video, a man is seen running to a woman to help extinguish the flames. She repeatedly pushes him back as he tries to use his coat to stop the fire, before she eventually falls to the ground.

Russia’s Investigative Committee confirmed that Irina Slavina, who leaves behind a husband and daughter, had died but denied any connection to a search of the journalist’s flat.

Irina Slavina was editor-in-chief of the small Koza Press news website. Its motto is “news and analytics” and “no censorship”. Its website went down on Friday, as news of her death was confirmed.

She was one of seven people in Nizhny Novgorod whose homes were searched on Thursday, apparently as part of an inquiry into Open Russia.

Last year, she was fined for “disrespecting authorities” in one of her articles.

“This news was a real blow for me, I knew her,” said Natalia Gryaznevich, an aide to exiled Open Russia founder Mikhail Khodorkovsky. “I know she was harassed, detained, fined all the time. She was a very active woman,” she told BBC Moscow correspondent Sarah Rainsford.

In a Facebook post on Thursday, she said 12 people had forced their way into her family’s flat and seized flash drives, her laptop and her daughter’s laptop as well as phones belonging to both her and her husband.

Why was her home searched?

The investigative committee insisted that Slavina was only a witness in their case – “and neither a suspect, nor accused, in the investigation of the criminal case”, a spokesperson told Ria Novosti.

That criminal case appears to focus on a local businessman who allowed various opposition groups to use his spoof church for forums and other activities including training election monitors. Mikhail Iosilevich created the so-called Flying Spaghetti Monster church in 2016 whose followers were dubbed Pastafarians.

Ms Gryaznevich told the BBC that Open Russia had taken part in a “Free People” forum in April 2019 in Nizhny Novgorod which Irina Slavinia had attended as a journalist. Neither the man being investigated nor Slavina herself were part of Open Russia, she stressed.

She said the journalist had been fined 5,000 roubles (£50) because of her coverage of the event. The authorities had decided that the event she covered was connected to an “undesirable organisation”, according to Ms Gryaznevich.

The Kremlin said at the time the legislation was needed to improve cyber security.