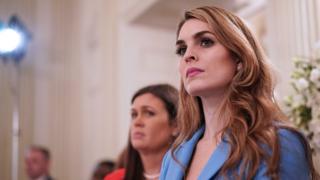 Image copyright AFP / Getty Images Image caption Ms Hicks has been at Mr Trump’s side for years One of US President Donald Trump’s closet aides, Hope Hicks, has reportedly tested positive for coronavirus.The adviser to the president travelled with Mr Trump on Air Force One to a TV debate in Ohio on Tuesday.She was…

One of US President Donald Trump’s closet aides, Hope Hicks, has reportedly tested positive for coronavirus.

The adviser to the president travelled with Mr Trump on Air Force One to a TV debate in Ohio on Tuesday.

She was in even closer quarters with him aboard the helicopter Marine One on Wednesday, White House reporters noted.

The 31-year-old would be the closest aide to Mr Trump to test positive so far.

She was pictured getting off Air Force One on Tuesday in Cleveland without a mask. She travelled with the president a day later to a rally in Minnesota.

The White House tests aides and anyone else who comes into contact with the president daily.

Mr Trump mostly spurns mask-wearing and is often pictured not socially distanced with aides or others during official engagements.

According to Bloomberg News, Ms Hicks is experiencing symptoms of the disease, and was quarantined on Air Force One on the trip back from Minnesota.

But there was no indication the president himself has contracted the disease, which has infected more than 7.2 million Americans, killing over 200,000 of them.

But he said in a statement to US media: “The president takes the health and safety of himself and everyone who works in support of him and the American people very seriously.”

That same month, a member of the US Navy who was serving as one of Mr Trump’s personal valets tested positive for coronavirus.

But the White House said neither the president nor vice-president were affected.

Ms Hicks was a campaign spokeswoman during Mr Trump’s candidacy before becoming communications director in his White House.

She stepped down in March 2018 to become chief communications officer at Rupert Murdoch’s Fox, before returning to the White House in February.

Who is Hope Hicks?