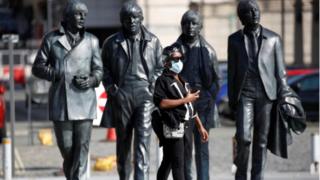 Image copyright Reuters Image caption Liverpool’s infection rate has risen 13 fold in a month A ban on different households meeting will be introduced amid further restrictions for the north of England after a spike in coronavirus cases.It will be illegal to meet indoors in places such as pubs in the Liverpool City Region, Warrington,…

A ban on different households meeting will be introduced amid further restrictions for the north of England after a spike in coronavirus cases.

It will be illegal to meet indoors in places such as pubs in the Liverpool City Region, Warrington, Hartlepool and Middlesbrough from Saturday.

In Middlesbrough, the mayor Andy Preston said: “We defy the government and we do not accept these measures.”

But he later said he would obey the law and urged others to do so.

Mr Hancock said he wanted the rules to stay in place for “as short a time as possible” and also “recommended against all social mixing between households”.

Mr Hancock told the House of Commons: “Earlier this week we brought in further measures in the north-east, however in parts of Teesside and the north-west of England cases continue to rise fast.”

Knowsley, an area in the Liverpool City Region, had the second highest rate in the country at 262 per 100,000 on 27 September.

Liverpool’s weekly infection rate rose to 258, Warrington’s was 163 and Hartlepool and Middlesbrough both had 121 cases per 100,000 people.

Burnley, where no further restrictions are yet to be imposed beyond the Lancashire-wide ones already introduced, has the highest infection rate in England at 327 per 100,000.

Six areas in England have been added to the coronavirus watchlist as an “area of concern”.

They are Barrow-in-Furness in Cumbria, Cheshire West and Chester, Cheshire East, Wakefield in West Yorkshire, Rotherham in South Yorkshire and Luton in Bedfordshire.

Sheffield has now been designated an “area of enhanced support”.

Mr Hancock said: “Working with council leaders and the mayors, I’m today extending these measures that have been in the north-east since the start of this week to the Liverpool City Region, Warrington, Hartlepool and Middlesbrough.”

Mr Preston tweeted he did not accept the new rules and described them as “unacceptable” and based on a “monstrous lack of communication and ignorance”.

He said: “We tried to communicate with the government but they didn’t listen.

However, he went on to confirm he would obey the law and urged others to do so.

Restrictions on households mixing, with a ban on people meeting in homes and gardens, were brought in across Merseyside and Warrington last month.

Households were also advised not to mix in public places but that was not enforceable by law.

It will now be illegal to mix indoors anywhere but there is also a recommendation not to mix outside, in beer gardens or parks.

Colm Buteux and his wife, who is a teacher, have two children, aged 13 and 10, and live in Warrington.

He said the new restrictions “won’t make a massive difference” but he does feel families with two parents can be “socially isolated”.

“I do get why the government is doing this but they should let families [with two parents] have access to a support bubble,” he said.

Single parents can form a social bubble with another household.

The 50-year-old contract commercial manager said he was “relieved” his children were still going to school and doing sports.

“I don’t care if they close every pub, I want my children to go to school and do exercise,” adding it was “tough” during lockdown when they were stuck at home.

Jo Davies, from Walton, Liverpool, lost her partner to Covid-19 in March and now lives alone.

The 72-year-old is used to having daily visits from her family who come round for meals and a “chit chat”.

“My grandchildren keep me young and I’m devastated I won’t be able to see them all, and there is going to be so many people like me,” she said.

Hartlepool and Middlesbrough previously had no additional restrictions apart from national measures.

“I know individual rules are challenging but they are necessary and there are early signs they are working,” Mr Hancock added.

Mr Hancock told MPs we must not “let up” but there was “small hope” given by a study from Imperial College which suggested the R number may be falling.

“I put it no stronger than that. Cases are still rising. However, as the chief medical officer set out yesterday this second peak is highly localised and in some parts of the country the virus is spreading fast.”

Mayor of Liverpool Joe Anderson told BBC Radio Merseyside: “It’s a strange one because it seems to be a halfway house.

“The infection rate is basically out of control…the businesses, the bars, the hotels, the restaurants, those are the people that are employed by the hospitality sector. Thousands of them are going to close and potentially won’t come back.”

He said funding announced was a “drop in the ocean” and he was “deeply, deeply worried” about businesses.

One of the strange things with the first wave in the UK was that the virus seemed to seed everywhere.

In other countries, Spain and Italy for example, it was much more localised with the virus highly concentrated in a few towns and cities.

But as the second wave rolls out, a clear pattern is emerging with marked peaks in a number of north-west and north-east areas.

It was a point made at the televised briefing on Wednesday with chief medical adviser Prof Chris Whitty saying the UK may have quite a different spread this time round.

The situation could easily change. Other areas may see sharp rises in the coming weeks – although the evidence at the moment suggests a more gradual increase.

The big unknown is why this is happening. Certainly there were higher levels of infection in the north when lockdown lifted, making it easier for the virus to take off.

There are a number of other theories – from the socialising habits of young people to the high concentration of densely-populated housing.

Whatever the cause, the high rates of infection and climbing hospital admissions in these areas is the issue that is causing ministers and their officials most concern at the moment.

The leader of Knowsley Council, councillor Graham Morgan, tweeted he was “concerned” the further restrictions “won’t be enough to stop the spread of the virus here”.

“We’re at a critical point and need swift, effective solutions to protect our residents.”

Steve Rotheram, metro mayor of Liverpool City Region, said he wanted to know the exit strategy for these restrictions.

He said: “It’s a bit like the Hotel California- you can check out but you can never leave. Other areas have gone into restrictions and months later they are still there. We can’t afford that.”

Marie Rimmer, Labour MP for St Helens South & Whiston, said she welcomed measures that would “help to keep all of us safe” but with each new set of restrictions, things were “getting more confusing and more difficult”.

The strain it is taking on mental health alone cannot be underestimated, she said.

Mr Hancock also said Bolton would be “brought in line” with the rest of Greater Manchester.

This means easing restrictions which reduced all pubs and restaurants in the town to takeaway only.

There would be no other changes to restrictions elsewhere, including West Yorkshire, Midlands, North East and other parts of Greater Manchester, he said.

Are you in one of the regions? What will stricter measures mean for you? Emailhaveyoursay@bbc.co.uk.