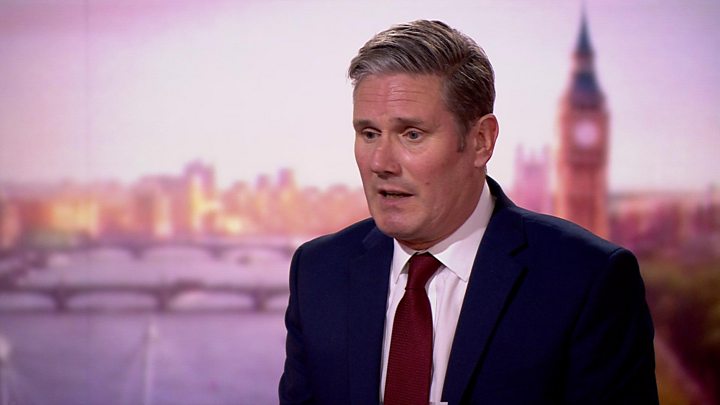 Media playback is unsupported on your device Media captionSir Keir Starmer: ‘Government is losing control of where the virus is’ Sir Keir Starmer has called on Prime Minister Boris Johnson to apologise for a “near collapse” in the government’s coronavirus test and trace system. The Labour leader told the BBC ministers had “lost control of…

Sir Keir Starmer has called on Prime Minister Boris Johnson to apologise for a “near collapse” in the government’s coronavirus test and trace system.

The Labour leader told the BBC ministers had “lost control of where the virus is”, making the need for further restrictions “more likely”.

He added that “fixing testing” should be the “number one priority”.

The health secretary said extra resources were being put towards speeding up test results.

Matt Hancock blamed a spike in those without symptoms seeking tests for an increase in demand, but said this had fallen in the last week or so.

But he admitted the proportion of test results being turned around within the government’s 24-hour target period “clearly needs to go up”.

Sir Keir’s call for an apology over testing comes as the government introduces fines of up to £10,000 for people who fail to self-isolate after being ordered to do so.

A new legal duty in England will require people to self-isolate if they test positive for the virus, or are traced as a close contact, from 28 September.

The UK government hopes the new fines will be replicated in Wales, Scotland and Northern Ireland, which have powers to set their own coronavirus rules.

But he added: “If I were the prime minister, I would apologise for the fact we’re in this situation with testing.

“Throughout the summer, we were saying ‘prepare for the autumn’. Instead, we had the exams fiasco.

“I would make fixing testing the number one priority, and reinstate the daily press conferences so we know what’s going on.”

Asked whether problems with testing made a second nationwide lockdown more likely, Sir Keir said: “I don’t think a lockdown is inevitable.

“But I do think it’s now more likely because of the near collapse of testing”.

The warning comes after the head of England’s test and trace system said earlier this week that demand for tests was “significantly outstripping” supply.

Baroness Harding told MPs the return of children to school classrooms meant test demand in England among under-17s had doubled.

“I don’t think anybody was expecting to see the really sizable increase in demand that has happened over the last few weeks,” she said.

Also speaking to Andrew Marr, Mr Hancock said: “Thankfully, the demand has come down a bit this week.”

He said the government had been “clearer and more stringent” about prioritising tests for “people who need them, who have symptoms”.

Ahead of the expected publication of a list of which people will be put at the front of the queue for tests, he said: “We need to be clear about that prioritisation.”

“We also need to build that [testing] capacity,” he added.

Meanwhile Sir Keir has also called for children to be prioritised for testing, adding there was a “desperate” need for increased testing to keep schools open.

He said children should be put in the “same position” as key workers, with tests available within 24 hours and results reported within a further day.

He added that this would require a total testing capacity bigger than the 500,000 target currently promised by the government by the end of next month.

Sir Keir’s interview comes as he prepares to address Labour members next week during the party’s online conference, which began on Saturday.

Renamed Labour Connected, the four-day event replaces the party’s traditional party conference in Liverpool, which has been cancelled due to the pandemic.

Sir Keir said the event would give the party an opportunity for “changing and refocusing on winning the next election”.

But ahead of the event, he has been warned against “watering down” the “radical policies” of his leadership campaign by the head of the Labour-affiliated Fire Brigades Union.