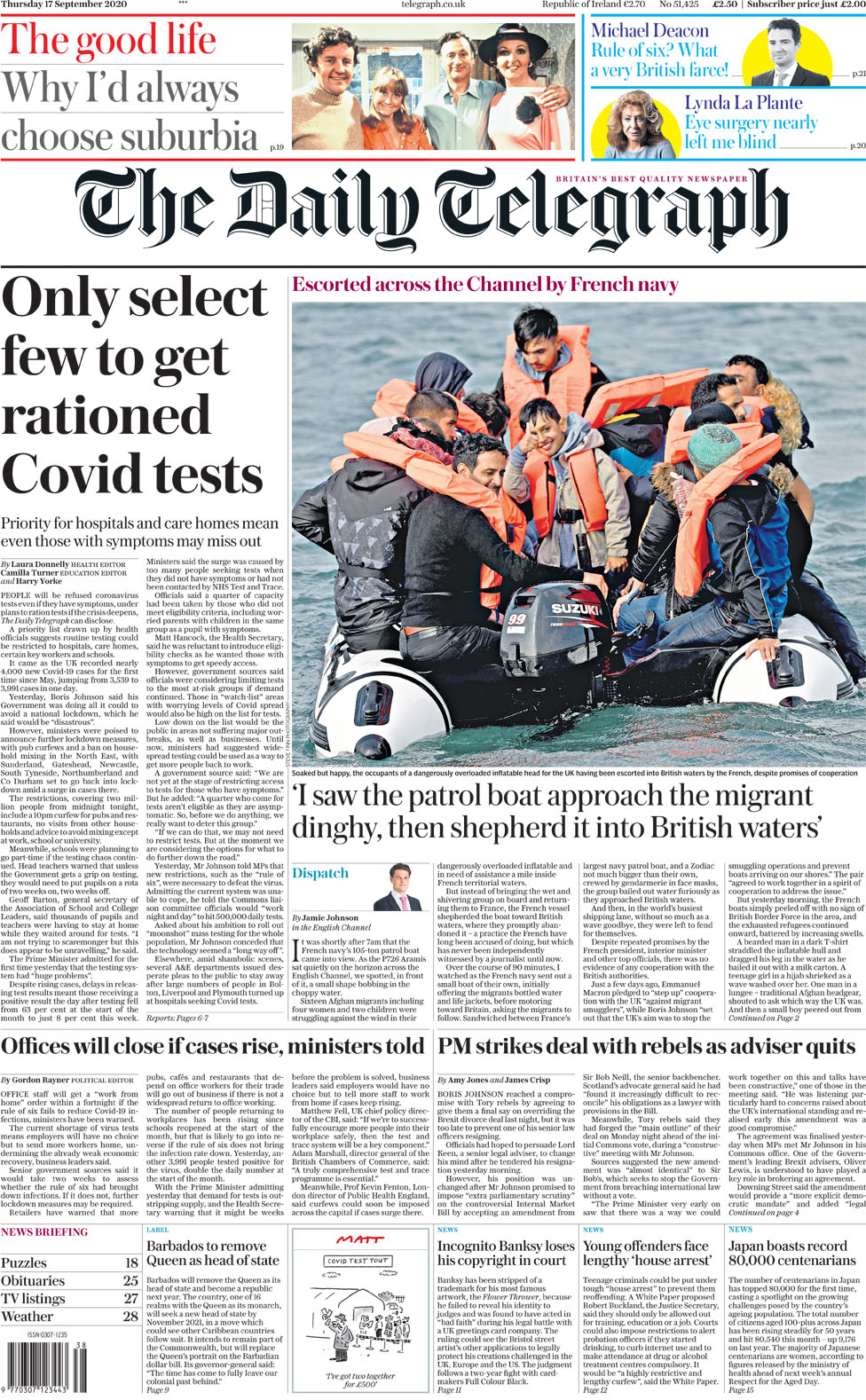 By BBC NewsStaffPublishedduration32 minutes agoimage captionThe problems with testing continue to dominate several papers. The Daily Telegraph says it has learnt more details about the government’s plan to prioritise tests, after shortages. The paper says even people with symptoms will be refused tests unless they’re on the priority list – which could be limited to…

The long waits for coronavirus tests continue to make front page headlines for another day – and the papers do not mince their words.

For the Daily Express, the system has gone into “meltdown”, while

the Daily Telegraph describes it as a “shambles” and for the Daily Mail, a “fiasco”.

The Daily Mirror’s front page has a picture of a queue outside one walk-in testing centre, accompanied by the headline: “Tories aren’t testing”.

The paper makes a comparison with a Conservative poster during the 1979 general election campaign showing people queuing for jobs with the words: “Labour isn’t working”.

The main cartoon in the Times also recalls that poster – but replaces it with the words: “Testing isn’t working”.

The Mail says it warned of a looming test crisis five months ago. Its cartoon shows a queue of mask-wearing people waiting to see a fortune teller – with one customer pleading: “Yes, I’m desperate – when CAN I get a Covid test?”

The paper also has a series of aerial shots of what it calls largely vacant testing centres, despite the surge in demand. At one centre, it says, there were more traffic cones than people.

It is, as the headline declares, a “portrait of a country that can’t get its act together on testing”.

Elsewhere, the verdict on the government’s performance in no less damning. Writing in the Express, journalist Leo McKinstry says the combination of inaccessibility and slow results is already inflicting real harm.

Urging the government to “get a grip”, he says ministers have consistently over-promised and under-delivered.

In the view of the Times, the failures are more than a source of political embarrassment. They are a threat to the government’s ability to fulfil its most basic obligations to the public.

For the Sun, the system is clearly broken.

Meanwhile, writing in the Telegraph, commentator Allister Heath believes that Mr Johnson has six months left to save his premiership.

According to the Daily Telegraph, people will be refused tests even if they have symptoms, under plans to ration them if the crisis deepens.

It says a priority list drawn up by health officials suggests routine testing could be restricted to hospitals, care homes, certain key workers and schools.

Low down on the list would be the public in areas not suffering major outbreaks, as well as businesses, the paper adds.

The Guardian and the i newspaper focus on the crisis over testing in schools.

According to the Guardian, research suggests that up to 25,000 teachers in England may already have been forced out of the classroom and into self-isolation amid the shortage of tests.

The Times reports that pubs and restaurants face early closing times to slow down infections.

It says the prime minister is looking for targeted ways to control the epidemic – and hospitality businesses in hotspots could be ordered to shut by 22:00 BST.

The Sun leads with an interview with Boris Johnson, in which he describes the spike in cases as the “second hump” of a camel’s back which will only be flattened by “tough love” measures such as the “rule of six” and curfews.

He tells the paper: “The only way to make sure the country is able to enjoy Christmas is to be tough now”. The paper’s headline reads: “My plan to save Christmas”.

There is also plenty of interest in Angela Rayner’s debut at Prime Minister’s Questions – standing in for Sir Keir Starmer.

The Daily Express says excitement crackled around Westminster, as MPs had high hopes for an encounter pitching a Stockport-born former care worker, who quit school at 16 without qualifications against an Eton and Oxford-educated Tory premier.

The Daily Telegraph reports that a French vessel that went to the assistance of a dangerously overloaded inflatable carrying migrants across the English Channel, shepherded the boat towards British waters.

They then abandoned it rather than returning them to France, the paper says.

The paper’s correspondent says it’s a practice the French have long been accused of doing, but which has never been independently witnessed by a journalist until now.

He says the French offered the migrants bottled water and life jackets. They were finally picked up by the UK Border Force.

In a statement to the paper, French officials don’t deny the report, but add that they brought 24 people in two vessels back to France that day.

Finally, the classic game show Blankety Blank – originally hosted by stars including Terry Wogan and Les Dawson – could be revived, 18 years after the last series ended.

The Sun reports that the BBC is to film a pilot show later this year, and make a new series for Saturday nights if it is a success.

One TV insider is quoted as saying: “There is a hunger for fun, family programming – and nostalgia seems to be a winner every time.”