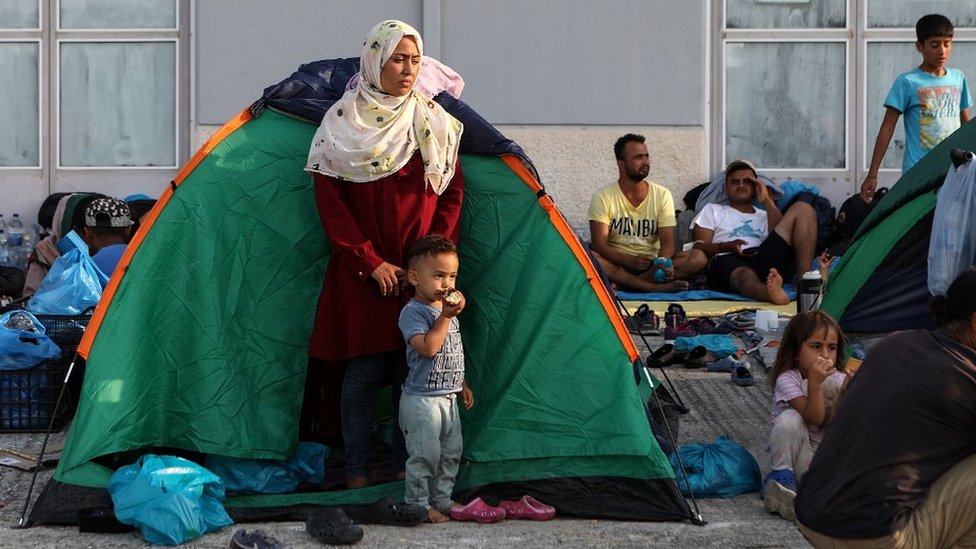 Publishedduration1 hour agoimage copyrightReutersimage captionMigrants have been sleeping rough for a week since the Moria blazePolice on the Greek island of Lesbos are moving thousands of migrants and refugees from the fire-gutted Moria camp to a new tent city nearby.Seventy female officers in protective suits were flown in to organise the transfer of women and…

Police on the Greek island of Lesbos are moving thousands of migrants and refugees from the fire-gutted Moria camp to a new tent city nearby.

Seventy female officers in protective suits were flown in to organise the transfer of women and children to the temporary Kara Tepe camp.

A government official said 1,800 had moved into Kara Tepe by early Thursday.

But many migrants and refugees remain reluctant to stay on Lesbos, as Moria was overcrowded and squalid. They hope to go elsewhere in Europe, especially Germany.

More than 12,000 people fled the Moria blaze and most have been sleeping rough since then, short of food, water and shelter.

Officers began waking families early on Thursday to move them to the new camp. Footage from the scene shows female officers dressed in white speaking to the migrants.

The migrants are being tested for coronavirus before entering Kara Tepe. Reuters news agency reports that 56 have been found Covid-19 positive, and the authorities are striving to keep those infected isolated. A police spokesman told AFP the operation aimed “to safeguard public health”.

The fire broke out last week after 35 people tested positive for coronavirus and some objected to being put into isolation after months of lockdown.

During the operation to move migrants to the temporary camp, the NGO Medecins Sans Frontieres (MSF) tweeted that it had been denied access to its new clinic in Lesbos by Greek police.

After several hours the group said they were finally allowed to reopen their site, but said it was “highly concerning” that their medical care was interrupted during the move.

People from 70 countries had been sheltered at Moria, most from Afghanistan.

The German government has now agreed to take in 1,553 migrants from Moria – they are from 408 families who have received refugee status.

Earlier, Germany also said it would take in up to 150 unaccompanied minors. Greece flew 400 children to the mainland last week, and EU countries have agreed to receive them, though the details are not yet clear.

Since the 2015 migrant crisis the numbers arriving on Greek islands near Turkey have fallen considerably, but Greek camps, like those in Italy, remain overcrowded.

Greece and Italy have accused wealthier northern nations in the EU of failing to share the burden, as irregular migrants – including refugees from war zones – continue to seek a new life in Europe.