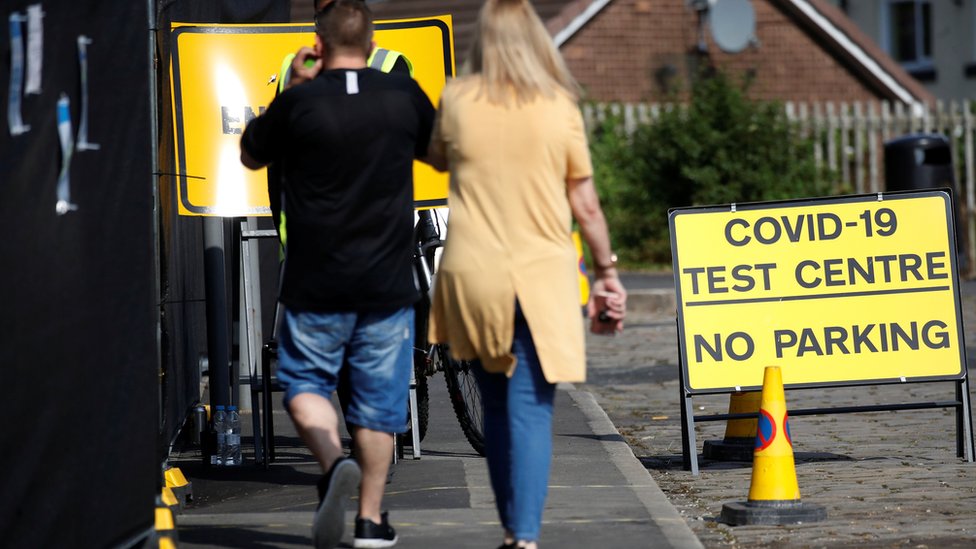 Publishedduration7 minutes agoimage copyrightReutersimage captionTest centres in Bolton have seen long queues as people try to get testedMore than 100 people turned up at an A&E asking for Covid-19 tests, sparking a plea from a hospital trust for anyone who was not seriously ill to stay away.Bolton NHS Trust said dozens of people went to…

More than 100 people turned up at an A&E asking for Covid-19 tests, sparking a plea from a hospital trust for anyone who was not seriously ill to stay away.

Bolton NHS Trust said dozens of people went to Royal Bolton Hospital because they could not get into test centres.

The trust says it shows NHS Test and Trace is “failing” but the government insists it is “working”.

It would provide more “rigour” to the national system, he said.

Bolton had the highest infection rate in England with 204 cases per 100,000 people recorded in the week to 13 September.

The total number of cases rose from 437 up until 6 September to 587 a week later.

The trust’s medical director Dr Francis Andrews, said people should only go to hospital if they were “extremely unwell or referred by your GP”.

“We are extremely busy in our emergency department as a result of this increase,” he said.

“Only attend this department if you have experienced a life-threatening accident or illness and need urgent medical attention.”

Meanwhile, Alder Hey Children’s Hospital in Liverpool has urged parents not to bring children to its emergency department for a Covid-19 test after a “big increase” in people asking for tests there.

Prof Hall said the situation now was different to March when they had extra staff drafted in and were not expected to continue with planned operations.

“This failure of the test-and-trace system is placing huge pressure on the NHS and social care,” she said.

“We had 100 people in our accident and emergency unit.

“We’ve now got 30 people who are Covid-positive and we’ve got five people in our high-dependency unit so this virus is not going away.

“I’ve felt that there has been a real lack of a cohesive strategy for the whole containment of Covid-19 and for test and trace.”

Lancashire’s director of public health said the system was at “breaking point” and was “compromising our ability to stop the transmission”.

Teacher Simon Foster said he developed a cough overnight and, because of his job teaching children with special needs – many of whom have diabetes – he needs to get tested.

“I have tried all day to book an appointment and I still don’t have one,” he said. “It’s an absolute mess.”

“It keeps saying there was nothing available [and] there were no tests they could send by post either.”

Dr Sakthi Karunanithi said it was “beyond frustrating”, adding: “The issue is lab capacity.

Bolton Council said a test centre had been due to open on Saturday at the Last Drop Village Hotel, in response to the growing number of cases, but was delayed when “an external business” failed to turn up.

A spokesman said although the delay had been “out of our hands”, the authority was “working with the government and their partners to find out what has happened”.

Mr Burnham said 46% of named contacts were not being traced in Greater Manchester.

He said 100 police community support officers (PCSOs) and 100 fire officers would set up a unit to help contact people not being reached.

“It can’t be the case going forwards that we fail to fix test, trace and isolate and just introduce blanket restrictions. I don’t think people will accept that,” he said.

“We think more rigour in contact tracing, quality contact with people and support to self isolate would help improve the system.”

Steve Rumbelow, the chief executive at nearby Rochdale Council, told the

Local Democracy Reporting Service there had been a “noticeable change” in people’s behaviour across Greater Manchester and the testing system was in “meltdown”.

He said it was “largely” because people were unable to get tested.

“It’s not massive numbers, I don’t want to over-egg it, but [it] indicates that people are starting to get concerned,” he said.

“Test and trace is pretty much in meltdown.

“It’s a major concern, and the way tests are being rationed is just not sustainable for containing the virus effectively going forward.”

A Department of Health and Social Care spokesman said NHS Test and Trace was “working”, adding the system was “processing a million tests a week, but we are seeing significant demand for tests, including from people who do not have symptoms and are not otherwise eligible”.

He said anyone with an appointment would not be turned away, and new booking slots and home testing kits were being made available daily.

Are you in Bolton? Have you tried to get tested? Share your experiences by emailing haveyoursay@bbc.co.uk.