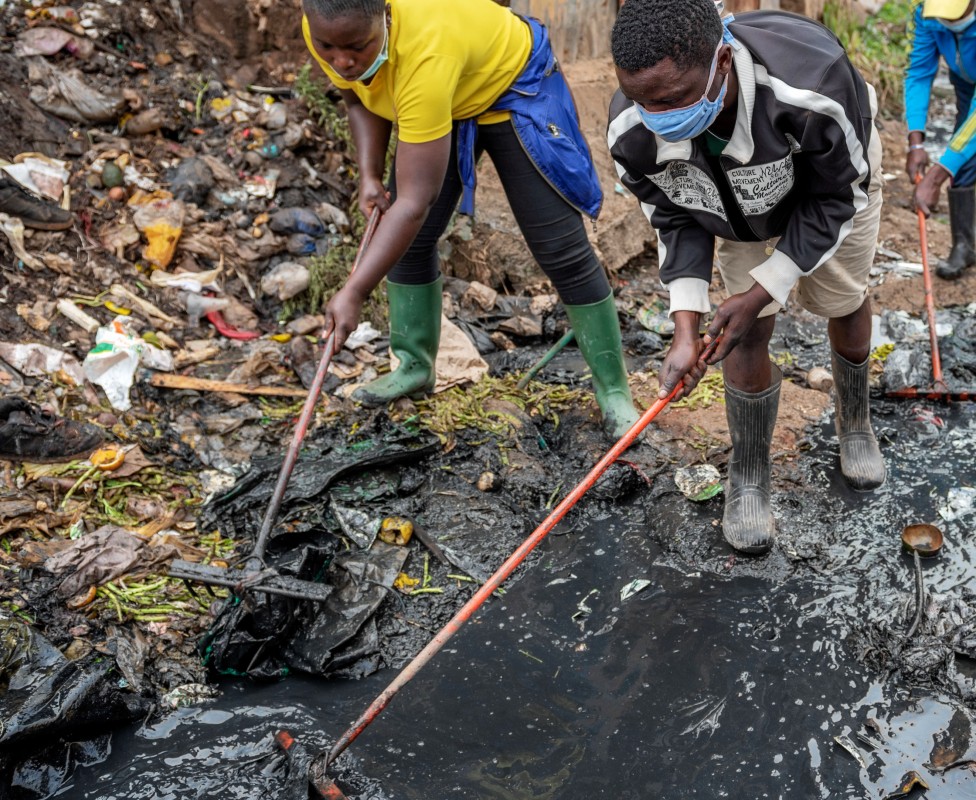 Publishedduration6 hours agoimage copyrightJeroen van LoonTo help some of the hundreds of thousands of Kenyans who have lost their jobs because of the coronavirus pandemic, the government is paying some of them to brave open sewers to clean up their neighbourhoods, writes journalist Andrea Dijkstra.Kenyans – dressed in neon vests, masks and gumboots – are…

To help some of the hundreds of thousands of Kenyans who have lost their jobs because of the coronavirus pandemic, the government is paying some of them to brave open sewers to clean up their neighbourhoods, writes journalist Andrea Dijkstra.

Kenyans – dressed in neon vests, masks and gumboots – are standing ankle deep in a stinking, grey stream which runs between the corrugated iron shacks of Kibera, the largest informal settlement in the capital, Nairobi.

“It’s disgusting work,” says 33-year-old Abdul Aziz, who is worried that he might get a water-borne disease like cholera because of the insanitary working conditions.

“However, this is better than staying at home, while being hungry and jobless,” the father of two children, who lost his job as a private driver at the beginning of the crisis, said.

According to the Kenya National Bureau of Statistics (KNBS) more than 1.7 million Kenyans lost their jobs in the first three months of the pandemic.

Game parks and lodges are largely empty because of the absence of tourists.

Many businesses have gone bankrupt and bars are closed because of an alcohol ban and curfew.

To prevent even bigger problems such as increasing crime and looting, the government launched a large-scale nationwide employment project to provide work to more than 200,000 Kenyans under the age of 35.

In Nairobi, it provides work to 55,000 people who are divided into two groups, each working a shift of 11 days per month.

Mr Aziz, who lives in Kibera, is happy with the project which he began work on at the end of July.

Half of his current income goes towards paying off debts to friends and shops he built up after his dismissal in April.

He hardly has any money left for rent and food. As a result, his family only eats one meal a day.

“This pandemic has ruined our lives,” says 23-year-old Sharon Sakase, who is also working on the sewage scheme in Kibera where she lives with her mother, three younger sisters, a younger brother and her own two children in a cramped, corrugated house of only a few square metres.

The single mother received a scholarship from a church to study tourism and hospitality.

However, the course was suspended seven months ago and the beauty salon, where she worked doing pedicures to bring in extra money, does not need her as clients have stayed away because of fears about the virus.

“It’s very hard to do this dirty job,” Ms Sakase admits – as a “flying toilet” whizzes past plunging into the sewer causing her colleagues nearby to scream.

These are plastic bags that residents without toilets use to get rid of human waste.

“Still, I am happy with this work,” the young mother says. “I now earn a bit of money to buy food for myself and my family.”

She has been the sole breadwinner of the eight-person family since her mother lost her job as a housekeeper during the corona crisis.

Kenya’s government took drastic measures to curb the spread of the virus, after its first infection was confirmed on 13 March.

A curfew was imposed, corona hotspots like Nairobi and the coastal region were sealed off for three months, the international airport was closed for five months and people had to work from home, which was obviously impossible for many.

As a consequence, 17% of the Kenyans are now unable to meet their living expenses while only 47% still have some form of regular earnings, according to a poll conducted by the financial research company FSD Kenya.

To try and ease the burden, the government has adopted economic stimulus measures. The sales tax and income taxes have been reduced and Kenyans with a monthly wage below $221 receive a 100% tax relief.

However, those working in the informal sector pay no tax anyway, so benefit little from these measures, except that products in official supermarkets may have become slightly cheaper.

“Many medium and small businesses have gone bankrupt, resulting in a huge number of people losing their jobs. These tax benefits were of little use to them, ” Kenyan economist Kwame Owino says.

The International Monetary Fund (IMF) gave a $739m loan to Kenya to help cushion the impact of Covid-19.

However, Mr Owino believes the government has failed to use public money quickly and effectively to cope with the crisis because of other major payment obligations and allegations of corruption.

“First, civil servants’ salaries must be paid and public debts need to be serviced,” explains Mr Owino, the director of Nairobi-based think tank the Institute of Economic Affairs Kenya.

Kenya’s public debt had risen to $54.3bn by June this year, or 62% of gross domestic product (GDP), for which the East African country received an official warning from the World Bank last year.

The government is investigating allegations of corruption after it was alleged that a large consignment of donations, including masks and ventilators from Chinese billionaire Jack Ma, had gone missing after it arrived in the country, as well as parts of loans and grants from institutions including the World Bank and IMF.

‘Friends expected me to get a good job’

For those unclogging drains and sewers in Kibera as part of the employment project, the future is worrying.

“Everyone in Kibera is desperately looking for work,” says 25-year-old Jack Omonoi, who graduated as a web designer two years ago.

He was working at an event agency before the pandemic but says everything was cancelled forcing him to join the sewer project out of sheer desperation.

“Friends saw me going to college and expected me to get a good job. Now they see me shovelling poop out of an open sewer,” he says while staring despondently at the ground.

“This situation is extremely frustrating.

“And nobody knows how long this will last.”