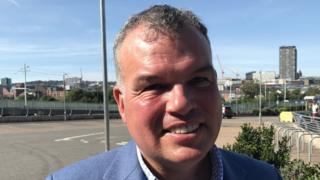 Image copyright David Richards David Richards was mocked when he chose Sheffield as the European headquarters for his computer firm.He says that explains a lot about the lack of social mobility in the UK.”Most of my friends in London thought it was some kind of staged joke,” he says.Raised in what he calls a “lower…

David Richards was mocked when he chose Sheffield as the European headquarters for his computer firm.

He says that explains a lot about the lack of social mobility in the UK.

“Most of my friends in London thought it was some kind of staged joke,” he says.

Raised in what he calls a “lower middle class” home, David emigrated from Sheffield to Silicon Valley in the US aged 23 to work in IT.

The company he went on to found, Wandisco, is now worth £400m and employs 300 people.

When he wanted to bring the firm home, he chose Sheffield, where he sponsors a course at Sheffield College, which trains students for careers in computing.

But as a new report is published showing sharp differences in life chances for less well-off children around England, he says private companies must shoulder some of the blame.

“The private sector in particular needs to recognise you can’t just create companies solely in London,” he says. “You just cannot do that.”

The way firms cluster in the South East might explain part of the problem – but the Social Mobility Commission says it is complicated. Life chances for many in the south are poor too.

Children from less well-off families are likely to end up in low-paid jobs no matter how well they do at school in some parts of England, its report says.

Those in the areas where social mobility is easiest earn twice as much as those where it was most difficult.

The commission says persistent poverty means some families risk being “locked into disadvantage” for generations. It is demanding the government does more to boost social mobility.

Children who went on to the lowest salaries were raised in places that were typically more deprived, had fewer good jobs and fewer outstanding schools, according to its report.

Much of this is obvious to less well-off young people living in Sheffield.

“In my school, teachers didn’t really motivate you. Their way of motivating was kind of like: ‘You’re not going to pass’,” says 17-year-old student Jamanuel.

16-year-old Jasmine adds: “My school did not have work experience, so if I got to look for a job now, I have no idea what I’m doing… We didn’t have that support at school, so I do think the city is divided.”

The father of one of Sheffield College’s current star students stacks shelves in a supermarket for a living, David Richards says, but builds computers in his spare time.

“Opportunity is not spread evenly in the UK,” he says.

“If he was living in Silicon Valley… he’d be working at one of the big tech companies.”

The Social Mobility Commission report – drawn up with the Institute for Fiscal Studies – compares how much people who received free school meals as children earned at the age of 28 in different parts of England.

Their median wages in the best performing areas were more than £20,000. In the poorest performing, that figure was less than £10,000.

A government spokesperson said: “Now more than ever, our focus is on levelling up the opportunities available to every young person in this country and we will do everything possible to make sure no-one is left behind as a result of the impact of the coronavirus pandemic.”

According to the commission’s report, life chances were best for disadvantaged children in places including East Hertfordshire and Wokingham in Berkshire.

Bradford and Hartlepool were among the worst performing towns. So too were West Devon, and the Chilterns.

Researchers only examined the earnings of men, the commission says, because data for female earnings would not have been comparable.