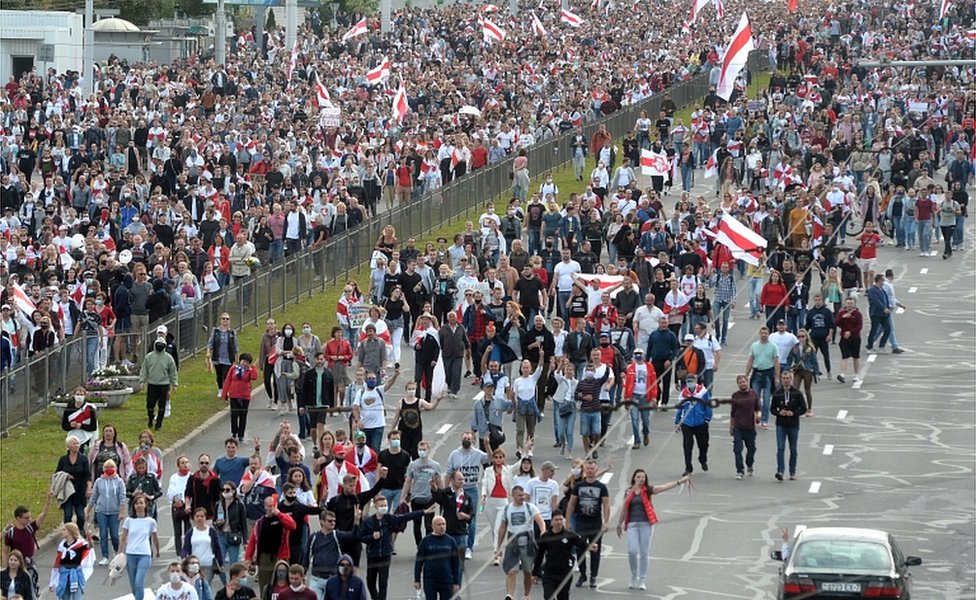 By Sarah RainsfordBBC News, MoscowPublishedduration9 hours agoimage copyrightEPAimage captionThe presidents of Belarus (left) and Russia met in the Russian city of SochiThe body language at this meeting was striking. The host, Vladimir Putin, struck his usual commanding pose, legs wide-spread in his chair whilst Alexander Lukashenko leaned-in towards him, hands clasped and at times almost…

The body language at this meeting was striking.

The host, Vladimir Putin, struck his usual commanding pose, legs wide-spread in his chair whilst Alexander Lukashenko leaned-in towards him, hands clasped and at times almost beseeching.

The Belarusian leader was in Sochi to seek Russia’s support in the midst of the biggest political crisis of his 26 years in power.

Before the cameras, at least, that is what he got.

Vladimir Putin welcomed his guest with warm smiles as the legitimate president of Belarus – downplaying five weeks of mass street protests over claims of a rigged election as a mere “domestic event”.

The Kremlin’s immediate priority seems to be in stabilising the situation across the border, trying to keep brotherly Belarus, broadly, in Moscow’s orbit and making sure disgruntled Russians do not get any ideas about the effectiveness of mass protests.

For now, at least, that means public backing for the man those protesters have turned on and who is now busy positioning himself as the most loyal friend Moscow could have.

So Mr Putin held out a $1.5bn (£1.2bn) credit line that will help Alexander Lukashenko pay the wages of the security forces keeping him in place – amongst other things.

And, critically, he confirmed that Russia would stand by all commitments to its neighbour including the promise of reinforcements should events on the ground deteriorate.

“Lukashenko wants to scare off his opponents, by implying that if they continue to revolt, and things go violent again, they’ll be dealing not just with him, but with Uncle Vladimir,” explains Artyom Shraibman, a political analyst based in Minsk.

That point was double-underlined by the opening of a week-long joint military exercise in western Belarus on the same day as the talks in Sochi. Mr Putin then announced that there would be further joint events “almost every month” – another sign that he will not allow Alexander Lukashenko to be swept away by “people power”.

But behind the scenes, some believe Russian support for the long-time ruler of Belarus is more qualified, even that the Kremlin believes he is now a liability it can no longer trust, fatally weakened by the protests and unable to deliver on any major promises.

“I suspect they understand that the damage to Lukashenko is beyond repair, and even if he can retain power for a time, he’s a lame duck,” Andrei Kortunov of the Russian International Affairs Council argues. “They should be thinking of a managed transition, to replace the president who lost his support.”

It is thought the price of Russia’s backing in the meantime could include some plum privatisation deals in Belarus, for example, or progress on less controversial economic integration plans, long on hold.

But after so many political U-turns by Mr Lukashenko in the run-up to elections – most notably a scandal over the arrest of 32 Russian mercenaries – Artyom Shraibman agrees that Moscow’s patience has run out.

“Now is not the time to put a gun to Lukashenko’s head and force him out by New Year. He is in a very emotional place, he wouldn’t listen,” Artyom Shraibman argues. “But I think Putin will be hinting at a transition.”

In his public comments, Vladimir Putin referred to Mr Lukashenko’s plan for constitutional reform as “logical” and rational, perhaps signalling Moscow’s preferred path out of this crisis. The Belarusian leader has previously hinted a reform might be followed by early elections.

Such deal-making ignores the loud and persistent demands of opposition voices who want Alexander Lukashenko to go immediately and for fresh, fair elections to be held with all political prisoners released.

But Moscow may judge that the protesters will ultimately be scared or frustrated into submission. It treats them like the weather, Artyom Shraibman argues, you just have to wait until the storm has passed.

In the meantime, the Kremlin may be manoeuvring to nudge its old ally out in its own way – once it has identified an alternative that both sides can trust.

“I don’t think the Kremlin will be willing to sit on its hands waiting for Lukashenko to step down, for long,” Andrei Kortunov warns. “They need some benchmarks. They won’t be happy to see this last too long.”