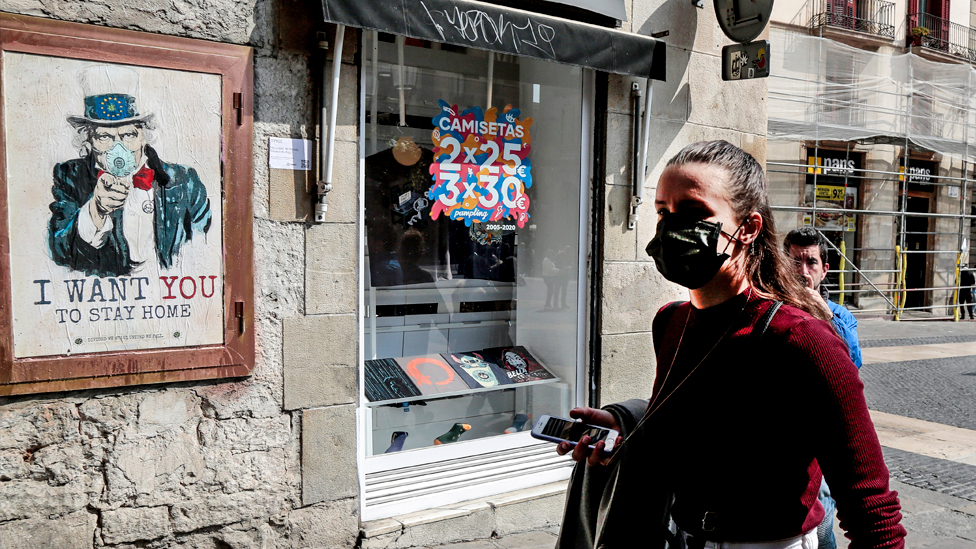 Publishedduration4 minutes agoimage copyrightGetty ImagesMeasures to deal with new coronavirus outbreaks are being imposed across Europe.Many involve the reintroduction of restrictions which had been eased following the initial lockdown. France: Masks have to be worn outdoors in some regionsimage copyrightEPAimage captionMasks are compulsory outside in some areas of FranceFollowing fresh outbreaks in July, the French…

Measures to deal with new coronavirus outbreaks are being imposed across Europe.

Many involve the reintroduction of restrictions which had been eased following the initial lockdown.

France: Masks have to be worn outdoors in some regions

The government wants to avoid a new national lockdown, so the new measures have been imposed by local authorities.

must be worn in public in Paris and surrounding areas by anyone aged 11 and over. Hundreds of other municipalities across France have also introduced this rule, including in Toulouse, Nice, Lille and Lyon and some beach resorts.

Masks also have to be worn in most workplaces. The rule applies in offices and factories wherever people are sharing space.

Masks have to be worn by anyone over the age of six on all forms of public transport in Spain and in many other indoor public spaces. Most regions in Spain have made masks obligatory outdoors as well.

The new school year has started and Spanish schools are asking children as young as six to wear masks at school.

The ban on large gatherings in Germany has now been extended to the end of the year, so the new Bundesliga football season will also start behind closed doors on Friday.

Testing at airports is now compulsory for all travellers arriving from high-risk countries and a minimum fine of 50 euros (£46) has been introduced for people failing to wear face coverings in shops or on public transport.

With infections rising again in Italy, authorities ordered closures of all dance halls and nightclubs, including outdoors ones, from 17 August.

Face masks must also be worn from 18:00 to 06:00 local time in all public spaces across Italy, where social distancing isn’t possible.

Children have gone back to school, after more than six months, despite schools in several regions saying that they are not ready to reopen.

The Belgian government has decided not to go ahead with the next phase of reopening places after a rise in infections.

Nightclubs remain closed and no major events, such as festivals, are allowed.

In the capital Brussels, wearing a face mask became compulsory in all public areas on 12 August amid a rise in cases.

Football fans are being let back into stadiums, but only at a fraction of the capacity, separated by empty seats and wearing masks.

In the Netherlands, you can have a maximum of six people visiting your home and they have to be able to stay 1.5m apart.

Local authorities can implement their own additional measures. Amsterdam and Rotterdam have both scrapped pilot schemes in which face masks would be compulsory in outdoor public spaces.

Children started to return to schools from 17 August. Extra hygiene measures have been put in place, but social distancing will apply to adults only.

Portugal: Tighter restrictions on the way

As pupils return to school and some workers return to their offices, new restrictions are being put in place from 15 September.

They include the closing of commercial establishments between 20:00 and 23:00 and limiting gatherings to a maximum of 10 people.

Greece: Testing offered to those returning from islands

Masks are now compulsory in all public indoor spaces and on all public transport in Greece.

Schools were due to reopen on Monday.

There have also been further local restrictions introduced on some of the Greek islands, and free on-the-spot testing has been offered to people arriving on the mainland from those islands.

Republic of Ireland: Some relaxation of restrictions reversed

Social visits to homes in Ireland, both indoors and outdoors, are limited to six visitors from no more than three households.

Outdoor gatherings are limited to 15 people.

People aged over 70 are again being asked to stay at home as much as possible, and workers are being encouraged to work from home if possible.

There have also been local lockdowns – the one in County Kildare has been extended into September.