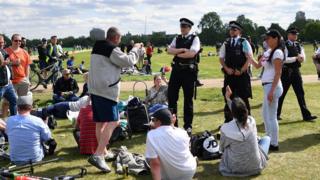 Image copyright Getty Images People should report their neighbours for any suspected breaches of new “rule of six” limits on social gatherings, the crime minister has said.Kit Malthouse urged residents to pass on details of suspected law-breaking through non-emergency numbers.From today, new rules restrict indoor and outdoor gatherings in England and Scotland, and indoor groups…

People should report their neighbours for any suspected breaches of new “rule of six” limits on social gatherings, the crime minister has said.

From today, new rules restrict indoor and outdoor gatherings in England and Scotland, and indoor groups in Wales.

They come after the UK’s reproduction, or R, number escalated to between one and 1.2 for the first time since March.

There were a further 2,621 confirmed cases of coronavirus in the UK on Monday, a fall after three consecutive days with more than 3,000 positive tests. But there have been widespread concerns about the availability of testing.

Nine more deaths were reported within 28 days of a positive test.

Asked on BBC Radio 4’s Today programme whether a person should report a gathering of seven or more in a neighbour’s garden, Mr Malthouse said: “It is open to neighbours to do exactly that through the non-emergency number.

“And if they are concerned and they do see that kind of thing, then absolutely they should think about it.”

The crime and policing minister added there were “discussions about what reporting mechanisms there might be, but there is obviously the non-emergency number (101) that people can ring and report issues they wish to”.

National Police Chiefs’ Council (NPCC) chairman Martin Hewitt denied that enforcement of the rule of six relied on people “grassing up” their neighbours.

“It relies on all of us being responsible,” he told BBC Breakfast.

Meanwhile, one in 20 people said in a survey of attitudes during the pandemic that they had reported others for rule breaches – Prof Bobby Duffy, director of King’s College London’s policy institute, told the BBC.

At-a-glance: What are the new rules?

Labour leader Sir Keir Starmer told LBC he backed the rules, adding: “You can make the argument of why not five or why not six or seven – you have to go with a number backed by the science and they say six, and I think we should abide by that rule.”

Later, it was announced Sir Keir would self-isolate, after a family member showed possible coronavirus symptoms.

The new rules come into force amid reports that the UK’s testing systems are overwhelmed, with Scotland’s First Minister Nicola Sturgeon expressing “serious concern” over what she described as a backlog of results in the lab network.

Alice Wiseman, Gateshead’s director of public heath, told the BBC local authorities had requested a mobile testing unit on Saturday, only to see it arrive a day late with dozens of people directed elsewhere for tests.

“We’re not able to do contact tracing unless we have a positive result,” she said. “In theory, there are potentially people walking around with Covid who just don’t know.”

Doris-Ann Williams, chief executive of laboratory testing industry body the British In Vitro Diagnostic Association, said delays to testing were being caused by a lack of staff and they were “trying to desperately recruit more” to increase capacity for the winter.

The new “rule of six” is a reminder coronavirus – and the restrictions placed on our lives – are far from over.

Scientists say a rise in cases is not just confined to hotspots like Bolton, but is being witnessed up and down the country.

That cannot be tackled with just “local lockdowns” hence national rules for all of us, albeit with slightly different flavours in the UK’s devolved nations.

And there may be more to come. It is anticipated coronavirus will get harder to contain through winter.

A multitude of bugs – from flu to the common cold – find it easier to spread when it is cooler and we spend more time indoors.

But coronavirus cases are increasing now, in summer – which technically ends next week.

Levels are still far lower than when they peaked in March, the virus is spreading far more slowly than pre-lockdown and the actions being taken now are aimed at preventing another lockdown.

But the road to normality remains a long one.

The “rule of six” in England – hailed as “super simple” by Health Secretary Matt Hancock – replaces guidance on allowing two households to meet indoors and a previous ban on gatherings which exceeded 30 people.

Under the changes, larger gatherings are still allowed at gyms, schools, places of worship, weddings and funerals. Education and work settings are not affected.

And new details of exemptions published on Monday revealed that shooting, yachting and ultimate frisbee were among the sports that could continue in groups of more than six.

Some Tory MPs have also urged No 10 to exempt young children in England and called for a debate over the rules.

Groups larger than six can be broken up by police, with members of the group facing fines of £100 for a first offence, doubling on each further offence up to £3,200.

But it emerged that fewer than half of people fined under existing coronavirus regulations in England and Wales had paid their penalties.

A letter from the Attorney General, written on 25 August and published last week, said 46% of more than 19,000 fines issued were past the deadline for payment and could be considered for prosecution.

How will the new rules affect you? Do you have a question about them? If you have had a coronavirus test what was the process like? Tell us by emailing haveyoursay@bbc.co.uk.