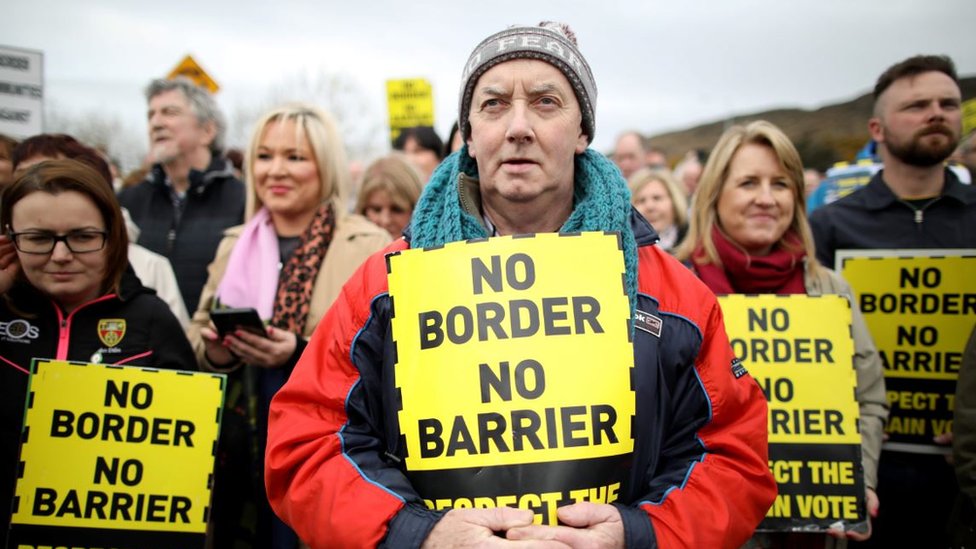 Publishedduration42 minutes agomedia captionSimon Coveney: “The reputation of the UK… is being damaged in a very serious way”Irish Minister for Foreign Affairs Simon Coveney has said the UK government is behaving in an “extraordinary way” over Brexit.His comments come in response to the Internal Markets Bill which has been proposed by Boris Johnson’s government. The…

Irish Minister for Foreign Affairs Simon Coveney has said the UK government is behaving in an “extraordinary way” over Brexit.

His comments come in response to the Internal Markets Bill which has been proposed by Boris Johnson’s government.

The bill would go against the Withdrawal Agreement, signed by the UK and EU earlier this year.

Despite this, Mr Coveney said a free trade deal was still a possibility.

Speaking to BBC’s Andrew Marr programme, he suggested it would be difficult for trade talks between the two sides to continue if the Internal Markets Bill passes through parliament.

“How then can the EU proceed with these negotiations, and put a new agreement in place, which will be the basis for a new relationship, if existing agreements, which aren’t even a year old, are being legislated against?” he said.

Boris Johnson has said the European Union is threatening to impose a customs border in the Irish Sea, separating Northern Ireland from the rest of the UK.

Mr Coveney rejected the suggestion that the EU’s position on having a customs border between Northern Ireland and Britain had hardened after the agreement was signed, calling this a “completely bogus argument”.

He noted the agreement had been hailed as a “negotiating triumph” at the time by the UK, and Prime Minister Boris Johnson had called an election after it was signed.

Mr Coveney said the UK government’s actions had created “enormous tension” in the negotiations in the “very little time left to get a deal”.

Prime Minister Johnson has said an agreement on trade must be done by 15 October, to be ready in time for the conclusion of the transition period at the end of this year.

“We can do a deal that prevents tariffs and quotas being imposed on trade between the UK and the EU and the UK and Ireland in the future.”

On Sunday, Alliance MP Stephen Farry said the UK’s admission it could breach international law was “completely outrageous” and that the proposed legislation could be damaging to Northern Ireland.

During the week, Boris Johnson said part of the reason for the Internal Markets Bill was to protect the the Good Friday Agreement and Northern Ireland peace process.

Mr Farry said the suggestion that the legislation was being put forward for “the benefit of Northern Ireland is completely spurious” and that “we have the protocol for a very genuine reason”.

“There was a need to protect the very particular circumstances here in Northern Ireland, especially around the Good Friday Agreement,” he said.

“It is deeply disconcerting to see how that agreement is being twisted to suit the agenda of the hard Brexiteers.”

Writing in the Sunday Times, Sir John and Mr Blair – former Conservative and Labour prime ministers respectively – said the government’s actions were “irresponsible, wrong in principle and dangerous in practice”

The DUP’s East Antrim MP Sammy Wilson dismissed their claims as “nonsense”, but said his party will table amendments to the Internal Markets Bill.