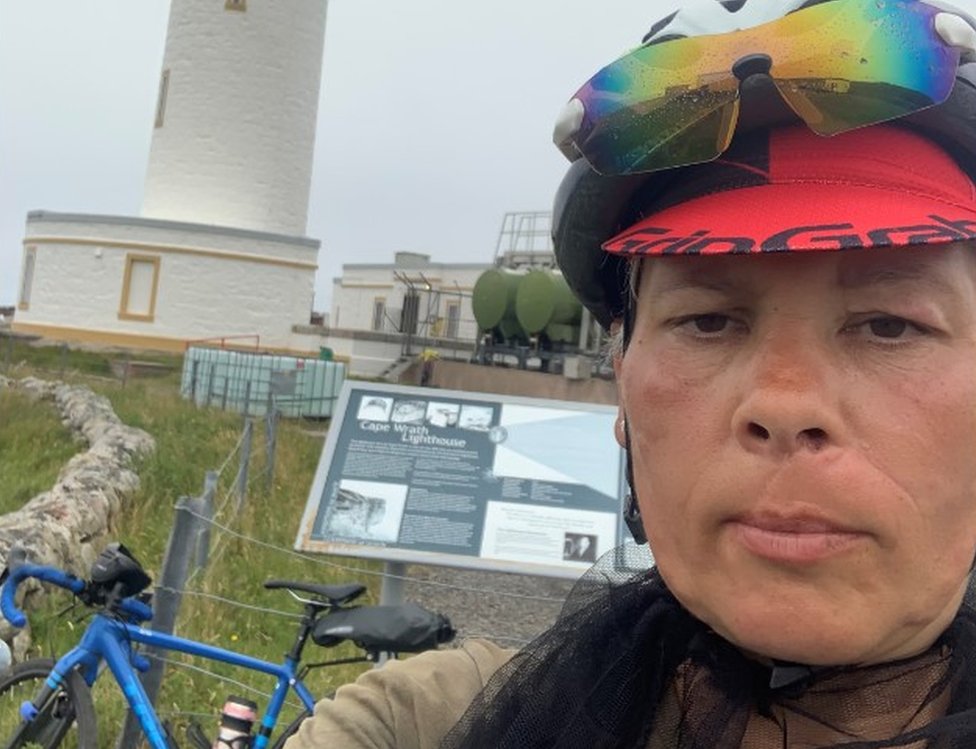 By Angie BrownBBC Scotland NewsPublishedduration1 hour agoimage copyrightSeria Hoggimage captionSeria Hogg said she did not want to live when she saw the damage to her faceWhen Seria Hogg was knocked off her bike by a hit-and-run driver, she was left with deep cuts to her face, a broken and collapsed cheekbone, four missing teeth and…

When Seria Hogg was knocked off her bike by a hit-and-run driver, she was left with deep cuts to her face, a broken and collapsed cheekbone, four missing teeth and a damaged tongue.

It took a year of dental work and three operations to reconstruct her face, but she has been left with mental as well as physical scars.

The 49-year-old from Penicuik in Midlothian said she first realised the extent of her injuries when her 19-year-old son visited her in hospital and cried when he saw her face.

When she was given a mirror in hospital and saw the damage for herself, she said she was “absolutely horrified”.

“My face was maybe twice the size it should have been because there were so many stitches. I sobbed as I couldn’t bear to look at myself,” she said.

“I tried to be so strong for my family despite feeling like my life was over.”

Children were visibly scared by her face and adults would stare, the mother-of-three said.

“It was a terrible time,” she said. “I wasn’t offered any counselling by the NHS or told about any organisations who could help me.

“A year went by of attending appointments, going to work and all the while I was completely unravelling and it culminated in me having a breakdown.”

Seria had been cycling in Edinburgh when she was knocked down by a disqualified driver in April 2009. He was later fined £600 for dangerous driving.

“I can’t remember anything about the accident and when I regained consciousness I was inside an MRI scanner. It was scary and I didn’t know where I was,” she said.

“They then sewed all my face up. I asked how many stitches I had and they said there were so many they couldn’t count.”

A bone had to be cemented in her jaw and she had to go for three hours to the dentist every week for more than a year.

She said: “The repairs were so traumatic and the drilling so painful and it caused me to keep refocussing on the accident.”

She had an operation on her nose, another for titanium plates to be fitted and a third using cartilage from her ear to repair her face.

“I had just started coming into my own as a woman and feeling confident when this happened and suddenly I felt like my life was over, it was a really hard thing to deal with,” she said.

“I felt I couldn’t look at people or they would be scared or disgusted. I overcame it initially by pretending but really I was falling apart and then a year later I had a breakdown.

“I grew my hair that was very short in a bid to cover my scars but it was in the middle of my face and I just couldn’t hide it.”

Browsing the internet five years after the collision, she came across free counselling charity Changing Faces, for people who had suffered “visible differences” to their faces.

“I wish I had known about this charity at the time because my facial injuries really affected my mental health,” she said.

“If I had known about the charity sooner I would have been able to get help sooner and maybe I wouldn’t have had a breakdown.”

Eleven years later Seria still is unable to feel one side of her face, which means she cannot smile.

Now she plans to cycle from Land’s End to John o’ Groats solo in a bid to raise money for Changing Faces.

“I decided that the driver had already impacted my life so much that I wasn’t going to let him take my love for cycling away,” she said.

“It still does upset me as it was such an awful time so I will use the time on my own on the bike to process my accident and focus on how much has changed since then.”

the UK’s only free counselling service for people with visible differences who need more help to cope.”

She sets off on her cycle on 18 September.