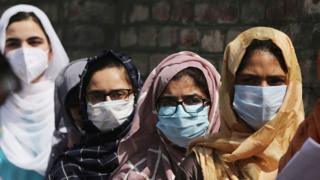 Image copyright EPA Coronavirus is continuing its spread across the world, with nearly 30 million confirmed cases in 188 countries and a death toll fast approaching one million. Six months after the World Health Organization (WHO) declared it a pandemic, the virus is surging in many countries and some that had apparent success in suppressing…

Coronavirus is continuing its spread across the world, with nearly 30 million confirmed cases in 188 countries and a death toll fast approaching one million.

Six months after the World Health Organization (WHO) declared it a pandemic, the virus is surging in many countries and some that had apparent success in suppressing initial outbreaks are also seeing infections rise again.

However, the number of confirmed cases during the spring peak is likely to be an underestimate of the true level of infection, as widespread testing was not available in many countries earlier in the year.

Confirmed cases around the world


Please upgrade your browser to see the full interactive

Note: The map, table and animated bar chart in this page use a different source for figures for France from that used by Johns Hopkins University, which results in a slightly lower overall total. US figures do not include Puerto Rico, Guam or the US Virgin Islands.

Asia is the continent currently seeing the highest number of daily confirmed cases.

India now has the second largest number of confirmed cases in the world, behind the US, and is recording daily figures of just under 100,000 cases.

The surge comes as the government continues to lift restrictions to try to boost the economy, but is also a reflection of increased testing – as daily tests have risen and hit more than a million per day in August.

Given the size of its population, India has a low death rate from Covid-19. But more than 1,000 deaths were recorded on Friday – the death toll has topped 1,000 every day since the beginning of September.

In Latin America, Brazil has the highest number of deaths, with about 130,000 so far. It has also recorded more than four million cases, the third highest in the world.

Newly confirmed cases in the region are also rising in Argentina, which now has more than half a million in total.

In the Middle East, Iran has been badly affected by the virus and documents leaked to the BBC Persian service suggest the death toll there is more than double the official total of about 23,000. Neighbouring Iraq has also seen a spike in cases.

Cases are also continuing to rise in Indonesia and the country has recorded nearly 9,000 deaths – the highest number in South East Asia.

Africa has recorded more than a million confirmed cases, although the true extent of the pandemic in the continent is not known. Testing rates are reported to be low, which could distort official estimates, but South Africa and Egypt have seen the largest recorded outbreaks there so far.

Several European countries are recording a rising number of daily cases amid fears of a resurgence of the virus.

Hans Kluge, the director general of the WHO’s Europe office, has likened Covid-19 to a “tornado with a long tail” and warned that rising cases among young people could spread the disease to more vulnerable older people.

A number of European countries have re-imposed local lockdowns in their worst-affected regions, and there have been renewed appeals for people to wear face coverings and follow social distancing rules.

The pattern of rising infections following the end of lockdown restrictions is not limited to Europe.

Other countries that have seen a resurgence of the virus include Peru, Israel, South Korea and Australia – although following the reintroduction of tougher restrictions most of these are now seeing cases fall again.

This information is regularly updated but may not reflect the latest totals for each country.

** The past data for new cases is a three day rolling average. Due to revisions in the number of cases, an average cannot be calculated for this date.

Cases in the US have slowed after second surge

The US has recorded more than six million cases of coronavirus, almost a quarter of the world’s total. It saw an increase in the number of daily cases in July, but the numbers have fallen since then.

With nearly 200,000 deaths, the US has the world’s highest death toll.

A projection from the University of Washington suggests there could be more than 400,000 deaths by the end of the year, though it says this could be reduced to 290,000 if 95% of Americans wear masks in public.

Europe and North America saw their first major outbreaks in April but as they began to ease, Latin America and Asia started seeing cases spike.

The International Monetary Fund has said the world is in the midst of the worst recession since the Great Depression and warned that it could take two years for economic output to return to pre-pandemic levels.

The United Nations has said that up to 265 million people could face starvation by the end of the year because of the impact of Covid-19.

Six months after pandemic declared, where are the hotspots?