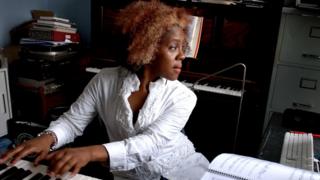 Image copyright Martin Godwin Errollyn Wallen has avoided saying much in advance about her new version of Jerusalem, commissioned for this year’s Last Night of the BBC Proms. It’s a solo for South African soprano Golda Schultz, accompanied by a pared-down and socially distanced BBC Symphony Orchestra.The song’s words emerged in the early 1800s from…

Errollyn Wallen has avoided saying much in advance about her new version of Jerusalem, commissioned for this year’s Last Night of the BBC Proms.

The song’s words emerged in the early 1800s from the extraordinary mind of William Blake.

The transition to the status of hymn (and then to a sort of stand-by national anthem) began in 1916 when Sir Hubert Parry set the words to an unforgettable tune.

The version heard most often at the Proms has in fact been Sir Edward Elgar’s 1922 reorchestration, which pumped up the volume with his trademark woomph and sparkle.

Wallen, 62, was born in the small Commonwealth nation of Belize before coming to Britain aged two, to be brought up in London by an aunt and uncle. Even decades later the idea of Belize, the Caribbean and the Commonwealth remain important to her.

Now an established composer with an unusual range, she loves the song. How different is her version, being sung in an audience-free Royal Albert Hall?

“Probably the second half is more as we know it. But my realisation is very different at first – apart from the tune. That’s so I can get nearer to what I feel is the original meaning of the Blake text, which is very searching and asking questions. The first half is much more dramatic.”

She says it’s a hymn she’s grown up with, having played the hymns on the piano in school in London from the age of 13.

“Luckily I had a hymn-book at home in Scotland, so when I was asked to do this I must have played the Parry music at least 100 times to get it into my bones.

“In this version the rhythms are different and it’s gentle. In Parry’s setting he alludes more to the patriotic nature of things but given where we are in the world I think my version is more reflective.

“There are stops and starts and bright colours in the orchestra. There’s dissonance too and I refer to the blues.”

The one thing Wallen has already made clear is that she sees her version as a tribute to the Windrush generation of migrants to Britain, mainly from the Caribbean.

“These have been very hard years for the Windrush people. It’s little understood here just how patriotic that generation was and how beloved England was to them. All of the colonies would have grown up knowing Parry’s hymn and we forget that this is music for all of us.

“I wanted to say to them this is your tune too. And I added a tiny mention of the Commonwealth, which is so important.”

The musician says the reason she grew up in Britain at all is that she had two uncles from Belize who volunteered to be in the RAF in the Second World War.

“The uncle who brought me up was so English – he revered Shakespeare and for him, coming to England had been the most enormous adventure and privilege. That’s what I was thinking about when I made my arrangement of Jerusalem.

“He married my aunt, who was a white woman from London’s East End. I think he was shocked at the level of racism he encountered. For instance, my other uncle was a skilled navigator in the RAF but was never allowed to become a pilot.

“It was the drip-drip effect of racist attacks on both those men which demoralised them.”

She adds her family always had “this love for England and a pride in its culture”, and from age four or five she grew up reading Tennyson and Wordsworth.

“That’s why words and poetry mean so much to me and now setting words is a joy,” she says.

Wallen’s contribution to this year’s Proms will give her an extra profile. Does she regret that coverage of the Last Night has been hijacked by an often bad-tempered debate on whether Land of Hope and Glory and Rule, Britannia! should be performed in full with all their patriotic words?

“I think we live in an age where everybody has their own story and wants to shout about their own story. I was actually shocked at how many people had a sense of ownership of types of music without understanding that music belongs to everyone.

“Shout as you like but we’re all entitled to access to this music. Traditions change – and they should change.”

As one of the small group of living composers involved in this year’s Last Night of the Proms, Wallen can enjoy one great privilege – she gets to go to the event.

She’ll be in a judiciously positioned seat somewhere in what will be a virtually empty hall.

“I will have a Belize flag I shall be waving. And there’s a Belize shaker – the little instrument I included in Jerusalem as part of the percussion section. I’ll be hearing a little bit of Belize. I’m very excited.”