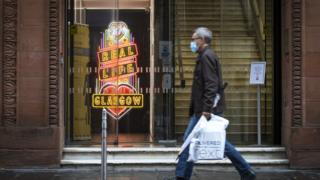 Image copyright PA Media Daily coronavirus cases in Scotland have hit a four month high, the latest Scottish government statistics show. A total of 221 people tested positive for the virus in the past 24 hours – the highest daily figure since 8 May, when there were 225 positive tests.The latest statistics also show there…

A total of 221 people tested positive for the virus in the past 24 hours – the highest daily figure since 8 May, when there were 225 positive tests.

The latest statistics also show there were no more deaths following a positive Covid test.

It comes as tougher coronavirus restrictions are imposed on people in North and South Lanarkshire.

They are not allowed to meet other households in their homes, or visit other peoples’ homes.

Similar measures are already in place in Glasgow, East and West Dunbartonshire, Renfrewshire and East Renfrewshire.

“More than ever we must remember that what we do as individuals just now affects the wellbeing of everyone. Let’s look after each other,” she added.

And Prof Jason Leitch, Scotland’s national clinical director, admitted that 221 positive cases was a “big number compared to what we have got used to”.

“As we’ve opened up it’s inevitable the virus has found new ways of getting from household to household – and that’s all it wants to do; it wants to find new people to infect,” he told BBC Scotland.

“You’ve seen us take fairly harsh interventions and restrictions to some areas – that won’t work instantly. It will need days, weeks, even a number of weeks, to show in the numbers.

“It’s not good news, but it’s what we expected. The virus doesn’t work in 24 hour cycles – it works in two to three week cycles.”

The daily statistics also show that 106 of the positive tests were recorded in the Greater Glasgow and Clyde health board area.

In the NHS Lanarkshire area there were 48 new cases, and there were 35 in Lothian.

There was at least one positive case in each of the mainland health board areas.