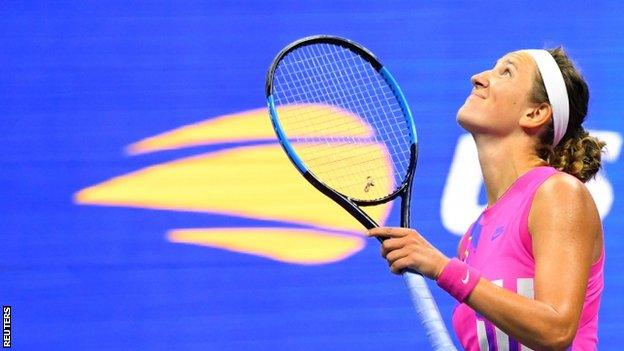 Serena Williams’ latest bid for a 24th Grand Slam singles title ended as Victoria Azarenka rolled back the years to reach the US Open final.

Williams, seeking to equal the all-time record for majors, raced away with the first set but lost 1-6 6-3 6-3 to the inspired former world number one.

The American called on the trainer for an Achilles problem early in the third set and struggled physically from then.

Two-time Australian Open champion Azarenka had been appearing in her first Grand Slam semi-final since 2013 after troubled times on and off the court.

But she has been in fantastic form in recent weeks, having now won 11 matches in a row after victory in the Western & Southern Open just before the US Open.

Azarenka finally gets better of Williams as old rivalry rekindled

Williams and Azarenka were once regular opponents on the biggest stages – but this was their first encounter in the latter stages of a Grand Slam since a Wimbledon quarter-final in 2015.

The two good friends have had maternity leaves since then and Azarenka’s career was also stalled by a lengthy custody battle over her son.

Williams had dominated their head-to-heads, winning 18 of their 22 encounters until now, including back-to-back wins in the 2012 and 2013 US Open finals. And until now she had won all 10 of their Grand Slam matches.

But that record was from a different time – in this match the stakes had changed, and so had the players.

Williams has for some time been carrying the pressure of the personal desire and the public expectation of a matching Margaret Court’s titles, while Azarenka is playing with a new freedom that has come only recently since she admitted she was finally enjoying her sport having “taken the fear of failing away”.

It had looked like Williams was in control of the match, racing through the first set in ruthless fashion in 35 minutes, but a missed backhand to put her 2-0 up in the second set marked the beginning of a change in tide.

When Azarenka launched a blistering backhand winner cross-court to break for 3-2 and then followed that up with a hold to love, the match became an encounter of the highest quality.

Williams’ screams got louder but her intensity dropped and a forehand into the net gave the Belarusian two set points, the first of which she converted.

The American, who had played three back-to-back three-setters coming into this, then needed treatment on her foot while trailing 1-0 40-40 in the third set.

While Williams had a vast amount of strapping applied, Azarenka sat with her eyes closed meditating in her chair.

She kept calm to break immediately on the restart and eventually sealed victory with an ace – via a desperate Hawk-Eye challenge from Williams.

“I needed to find energy to climb out of the hole and it wasn’t easy,” said Azarenka, who has said she contemplated retirement at times in recent years. “Hopefully it inspires women to go after their dreams, they can do anything.”

Williams has made no secret of her burning desire to equal Court’s record but opportunities are running out for the American, who turns 39 later this month.

With six of the world’s top 10 players absent from Flushing Meadows because of the coronavirus pandemic, plus an early exit for top seed Karolina Pliskova, this was a golden opportunity for Williams.

She has not won a major since the 2017 Australian Open, when she was eight weeks pregnant, and since returning to the tour after having her daughter she has lost four Grand Slam finals – Wimbledon and the US Open in 2018 and 2019.

The fact she is still making it this deep into majors – and performing so well at times – should still offer her encouragement.

She does not have to wait long for her next opportunity for a Grand Slam title, after confirming she will will “definitely” play at the rescheduled French Open in two weeks’ time.

Serena Williams started magnificently, and throughout the match moved well and defended robustly. But from the onset of the second set, Victoria Azarenka barely missed, and there was nothing even Williams could do once she hit the front.

The Belarusian has contemplated retirement on more than one occasion, as a custody dispute over her son dominated her life. But now – seven years on from her last Grand Slam final – she has the chance to win a third major title.

Despite the empty stands, this and Naomi Osaka’s win over Jennifer Brady were two of the best semi-finals you could possibly expect to see.