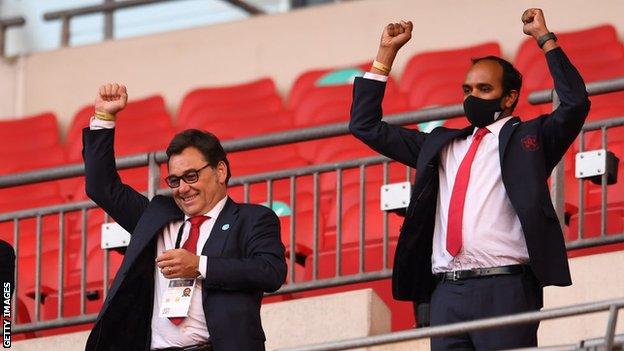 Vinai Venkatesham (right) watched his Arsenal side win the FA Cup for a 14th time against ChelseaArsenal chief executive Vinai Venkatesham says he has had sleepless nights over recent staff redundancies.The club were criticised for buying players shortly after announcing 55 redundancies – mainly affecting the commercial and administrative departments – on 5 August.Senior staff,…

The club were criticised for buying players shortly after announcing 55 redundancies – mainly affecting the commercial and administrative departments – on 5 August.

“I would be lying if I said there had not been sleepless nights,” Venkatesham said.

Nine days after announcing the redundancies, Arsenal signed Willian on a three-year deal from Chelsea, before paying Lille £23.14m for Brazilian defender Gabriel Magalhaes at the beginning of September.

But Venkatesham indicated that top-level clubs are facing financial uncertainty even as they invest in players.

The European Clubs’ Association – which represents professional clubs across Uefa’s jurisdiction – has estimated this week that the overall losses being borne by their members will be around £3.7bn.

And Premier League chief executive Richard Masters has said in recent days that English top-flight clubs faced losing £700m if fans were not allowed into stadiums during the 2020-21 campaign.

“This has been a really tough week,” said Venkatesham. “It is a week where lots of people have been finding out about how it all lands.”

Arsenal’s chief executive said the decision to make people redundant had not been taken easily – and defended the recruitment of players that followed, arguing that it was necessary to keep investing in the team.

He added that he was worried how the club would be affected by Prime Minister Boris Johnson’s announcement on Wednesday that plans to allow spectators to attend sporting events in England from 1 October are to be reviewed following an increase in coronavirus transmission rates.

“This is not a big organisation,” he said. “We’ve got hundreds of employees all based within 30 miles of each other. I know the people, I know their families. To make that decision was really tough but we needed to restructure our organisation.

“We hope the government announcement won’t change the aim to get fans back in the stadium on 1 October, but it’s possible that it will. Then there is the Premier League TV deal in China being terminated.

“Does anyone really think this thing is going away in two, three or six months? It is not. All of our revenue streams; broadcast, matchday and commercial will be impacted for a long time.

“At the same time, we need to make sure we are looking after the long-term health of this football club and, like any organisation, that means you need to invest.

“I understand the position of redundancies and then investing. But that’s because in other industries, the investment is made in machines. If you work for an airline, you need to buy new planes. Here, we need to invest in the team.”

It is anticipated the Premier League will lobby the government to be allowed to let fans back into grounds.

Plans for Tottenham, Manchester United and others to trial a percentage of spectators at league games this month have already been shelved.

“The virus is evolving in a way that is completely unpredictable but I would hope within grounds across the pyramid we can find a solution that would get fans back into stadiums in a safe way,” Venkastesham said.

“We could know the names and addresses of everyone in the stadium, they can self-certify, arrive earlier and leave later and we can check temperatures and social distance them for what is, predominantly, an outdoor rather than indoor environment.”

Arsenal head into the new season with the stated aim of qualification for the Champions League.

This will be the fourth successive campaign they have played in the Europa League, which they only qualified for by beating Chelsea in the FA Cup final on 1 August.

But Arsenal have been impressed by Arteta, who replaced the sacked Unai Emery last December, and have upgraded his job title from head coach to manager. That has been done to reflect the wider scope of his responsibilities, though they do not extend quite as far as Arsene Wenger’s did before his exit in 2018.

“This is recognition of what he has been doing from the day he walked in the door and also the capabilities we believe Mikel has,” said Venkatesham.

“He has walked into probably the toughest nine-month period this football club has had in its 134-year history. He’s on a long term contract and we’re really comfortable with what he’s doing.

“We belong in the Champions League. Yes we’ve been in European football for the past 25 years, which is a great record. But the past three years and this one, we are in a competition we don’t want to be in.

“We want to get back in the mix competing for the Premier League – and doing it the way Arsenal have always done, playing the entertaining, engaging football our fans want to see.”