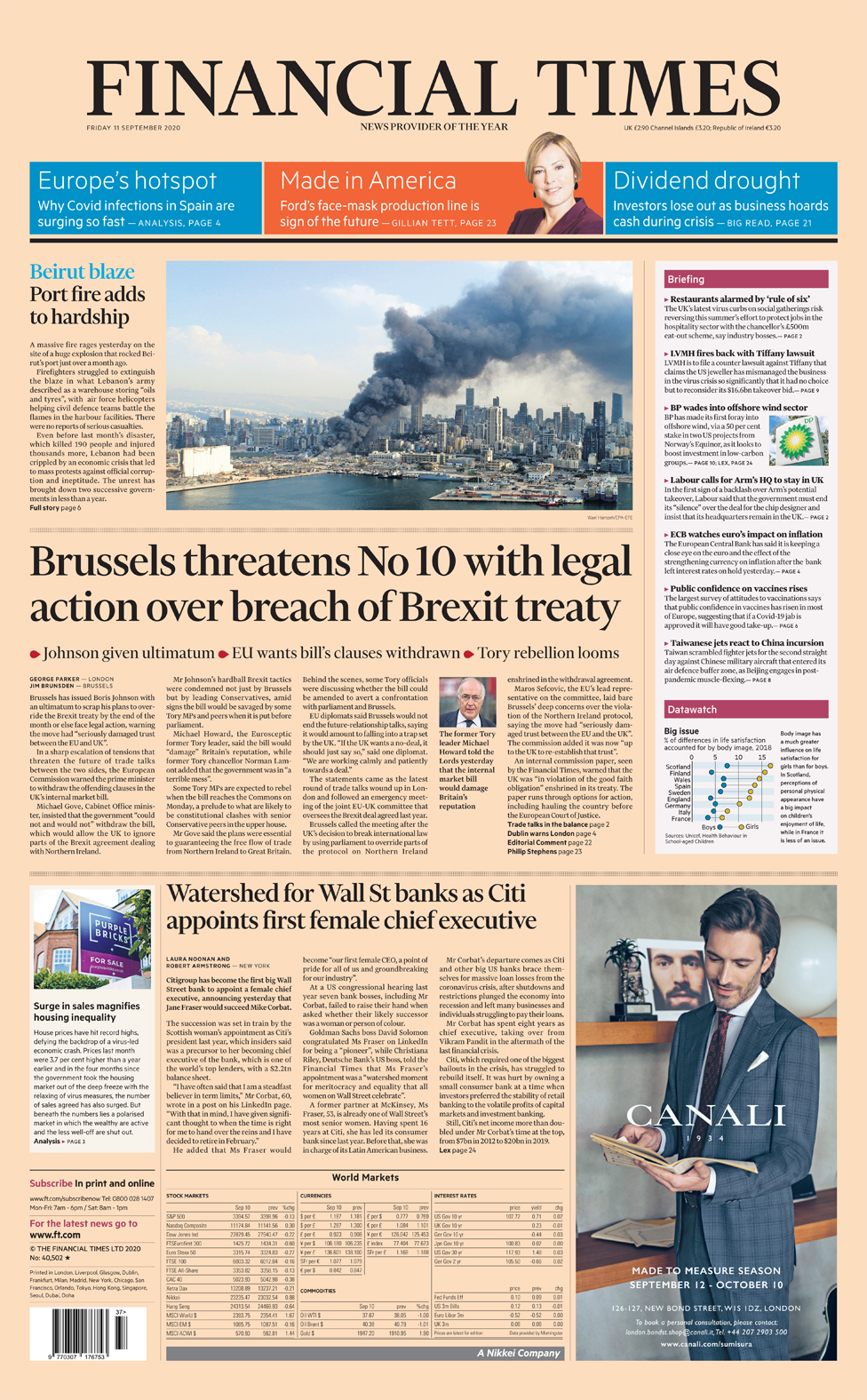 By BBC NewsStaffPublishedduration3 hours agoimage captionA Tory rebellion “looms” as Brussels threatens Downing Street with legal action over the UK’s plans to override parts of the Brexit withdrawal agreement, the Financial Times says. In a “sharp escalation of tensions”, the paper says, the European Commission has warned Prime Minister Boris Johnson to withdraw the “offending…

Relations between London and Brussels dominate many of the front pages.

“Brexit talks on the brink” is the Guardian’s headline as it suggests talks could collapse after the deadline set by the EU was rejected. “Ultimatum sets up bitter EU divorce” is the i’s take.

The Times reports that up to 30 Tory MPs are preparing a Brexit revolt amid growing anger about the breach of international law. But the Daily Express declares: “Britain shall not be moved” by threats from the EU. It insists Boris Johnson will face down the ultimatum given by “brazen” Eurocrats.

The subject provides plenty of meat for the leader writers too. “EU outrage is a threat to jobs and prosperity” is the view of the Daily Express.

It argues that while the UK is proud of its reputation for adhering to international law, it’s unthinkable that a government committed to restoring sovereignty wouldn’t take steps to deny the EU the power to disrupt trade between Great Britain and Northern Ireland.

The Guardian has a different assessment: that the government’s internal market proposals turn Britain into a “rogue state” whose word cannot be trusted. It says Conservative MPs must use their power to stop this shameful plan.

According to the Daily Mirror, the prime minister has failed to deliver on his “oven ready” Brexit deal – sabotaging negotiations with a hostile act that’s poisoned relations with Brussels, and degraded the UK’s standing on the world stage.

“Cabinet at war over the rule of six” is the Daily Mail’s headline as it reports growing Conservative unrest over the new coronavirus restrictions.

It suggests that almost every minister in the coronavirus strategy committee argued against the limit, but that Health Secretary Matt Hancock had “got his way”.

“Boris hit for six by Nicola” is the Metro’s headline. The paper says Ms Sturgeon’s decision not to count under-12s has increased pressure on the PM to rethink.

“Save Christmas or be labelled the Grinch” is the demand of Tory MPs, according to the Sun.

The paper agrees, labelling the rule of six a “needless disaster” that must be reconsidered.

“Vir-us and them” is the Daily Mirror’s headline, as it details new research by the think tank Demos that suggests the pandemic may be more socially divisive than the bitter debate that raged about leaving the EU.

The study found that about a third of people who voted Remain resented those who voted for Brexit, while only 20% of Leavers had feelings of animosity towards Remainers.

By comparison, 68% of those who strictly followed lockdown rules held negative views of those who didn’t, with 14% saying they “hated” them.

The Guardian also carries the story, suggesting that the early solidarity witnessed in communities in the pandemic has given way to distrust which could result in deep ongoing social divisions.

The appointment of the first female chief executive at a Wall Street bank is front page news for the Financial Times.

It describes Jane Fraser’s move from president of Citigroup to chief executive as a “watershed” moment.

It points out that Ms Fraser – originally a native of Fife – has been a pioneer for equality on Wall Street for many years, but that her latest promotion puts her in a small but growing group of women at the absolute top of the financial world.

And the Times brings us life lessons on bartering with a fugitive: don’t. Northumbria police posted the offer of a £1,000 reward on Facebook for information on a man wanted in connection with a drugs investigation.

But the suspect himself responded to the Facebook appeal, saying he’d pay double to anyone who didn’t disclose his whereabouts and that he’d turn himself in for £20,000.