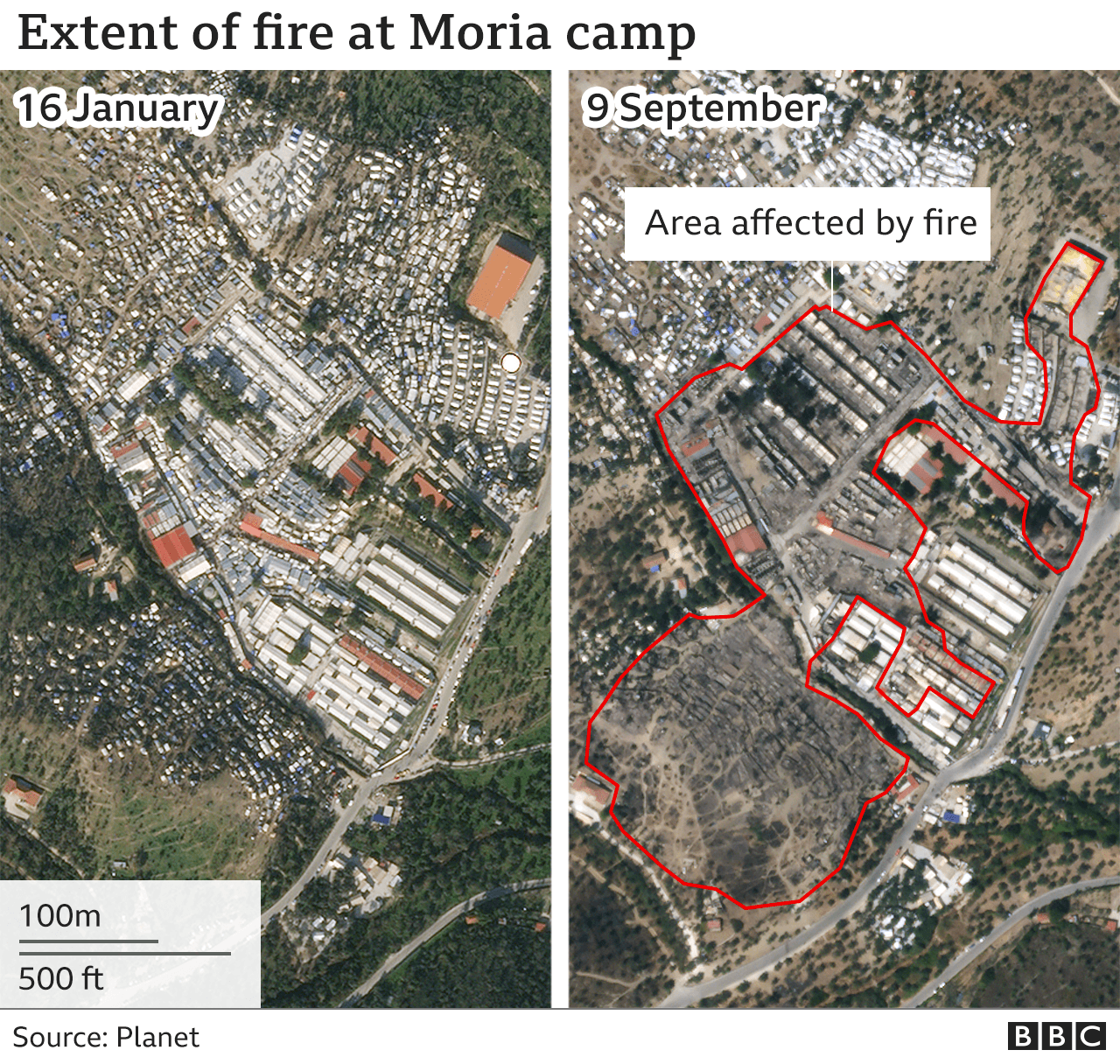 Publishedduration1 hour agomedia captionThe BBC’s Jean Mackenzie spent time speaking to people at the camp just six months ago and reflects on her experiences thereGermany says 10 European countries have agreed to take 400 unaccompanied minors who fled Greece’s largest migrant camp when it was gutted by fire.Most will go to Germany and France, Interior…

Germany says 10 European countries have agreed to take 400 unaccompanied minors who fled Greece’s largest migrant camp when it was gutted by fire.

Most will go to Germany and France, Interior Minister Horst Seehofer told reporters on Friday.

Close to 13,000 people had been living in squalor in the Moria camp on Lesbos.

Families have been sleeping in fields and on roads after fleeing the blaze on Wednesday, as authorities struggle to find accommodation for them.

Near the ruins of Moria, residents of the island blocked roads to stop charities from delivering aid and said they were against the construction of new tents.

But the Greek military later used helicopters to reach the site and have begun setting up replacement accommodation.

After visiting the area, European Commission Vice-President Margaritis Schinas announced that the devastated camp would be replaced by a modern facility at the same location.

The Moria camp was initially designed to house 3,000 migrants. People from 70 countries had been sheltered there, most from Afghanistan.

Migrants from the burnt-out Moria camp are staging a protest in front of the police barriers which prevent them from moving to other parts of the island.

Singing and banging plastic bottles, they march up and down a stretch of coastal road, calling for the right to leave Lesbos.

One person carried a large piece of cardboard emblazoned with the message: “We don’t want food, we want freedom.” Another banner read: “Moria kills all lives”.

Many local Greeks too want the migrants to leave the island.

“Now is the time to shut down Moria for good,” Vangelis Violatzis, a local municipal leader on Lesbos, told AFP news agency.

How to deal with the mass arrivals of migrants, mainly to Italy and Greece, has divided the EU for years.

Italy and Greece have accused wealthier northern countries of failing to do more, while a number of central and eastern nations are openly resistant to the idea of taking in a quota of migrants.

Mr Seehofer said France and Germany would each accept between 100 and 150 of the children. The Netherlands has already pledged to accept 50 and Finland will take 11. Talks are ongoing with other states to take part, Mr Seehofer said.

Other countries expected to take in children include Switzerland, Belgium, Croatia, Slovenia, Luxembourg and Portugal, according to German reports.

The fire at Moria was “a sharp reminder to all of us for what we need to change in Europe”, the interior minister said.

But a group of charities and NGOs have written to the German government saying more has to be done for all of the migrants, not just those minors.

“The shameful situation in the camp and the fire disaster are the direct result of a failed European refugee policy – now the EU must finally help the people affected,” the open letter reads.

All 400 children have now been flown to the Greek mainland. EU home affairs commissioner Ylva Johansson said on Wednesday that the EU had agreed to finance the transfer of the minors to the mainland and their accommodation. “The safety and shelter of all people in Moria is a priority,” she tweeted.

On Thursday, Greek Prime Minister Kyriakos Mitsotakis said the migrant crisis was Europe’s problem, and concrete action was needed by the EU to tackle it.

German Chancellor Angela Merkel spoke to Mr Mitsotakis on the phone and said she had agreed Germany would take some of the migrant children.

Touring the burnt-out Moria site on Thursday, Mr Schinas said it was “inconceivable” that the EU did not yet have a unified migration policy.

He said the Commission’s proposals for a new pact on migration and asylum, due to be presented on 30 September, would “put an end to this unacceptable situation”.

What caused the fire at the camp?

The fires started hours after reports that 35 people had tested positive for Covid-19 at the camp. Authorities placed the facility under quarantine last week after a Somali migrant was confirmed to have contracted coronavirus.

Eight of the 35 who tested positive for Covid-19 are since believed to have been found and isolated.

Greek Migration Minister Notis Mitarachi said the fires “began with the asylum seekers because of the quarantine imposed”. Some of those infected with the virus had reportedly refused to move into isolation with their families.

He did not say, however, that the fires were a deliberate act of arson aimed at destroying the camp.

But some migrants told BBC Persian that the fire had broken out after scuffles between migrants and Greek forces at the camp.

What is being done for the migrants?

Greece has sent three ships to Lesbos to provide accommodation for some 2,000 migrants. The Blue Star Chios ferry, which has capacity to house 1,000 people, has docked at the Lesbos port of Sigri. Two naval vessels have also been provided.

But officials have also increased security on the island. Military personnel, riot police and water cannon have arrived at the scene.

On a car park park outside a supermarket on Thursday, hundreds of migrants, including families with small children, waited for bottled water and food to be distributed.

“There is no food, no milk for the baby,” Congolese migrant Natzy Malala, who had a newborn infant and an eight-year-old girl, told Reuters news agency.

But there is strong resistance from locals for a new camp to house them. “We don’t want another camp, and we will oppose any construction work. We’ve faced this situation for five years, it’s time for others to bear this burden,” local leader Vangelis Violatzis was quoted as saying.