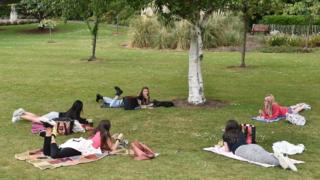 Image copyright Getty Images Image caption No more than six people from two households in the affected areas will be allowed to gather in a private garden Restrictions on visiting other households are to be reintroduced in parts of Northern Ireland after a rise in cases of coronavirus.The new rules affect people in Ballymena town,…

Restrictions on visiting other households are to be reintroduced in parts of Northern Ireland after a rise in cases of coronavirus.

The new rules affect people in Ballymena town, those who live in the Belfast council area and addresses with postcodes BT43, BT28 and BT29.

Those postcodes take in areas north east of Ballymena, and parts of Glenavy, Lisburn and Crumlin.

People cannot visit other people’s homes, but there are some exemptions.

No more than six people from two households in the affected areas will be allowed to gather in a private garden.

And people living in them are being advised not to travel outside the zones unless it is necessary.

The measures, which mark the first series of localised restrictions to be imposed in Northern Ireland since the lockdown in March, will take effect next week and be in place for at least a fortnight.

Northern Ireland currently has the UK’s highest rate of Covid-19 cases per 100,000 people.

First Minister Arlene Foster and Deputy First Minister Michelle O’Neill outlined the restrictions as they led their first joint press conference together at Stormont for 73 days.

Mrs Foster urged people living in the affected areas to “please take action now and stop the spread of the virus”.

“There is a creeping of the virus across Northern Ireland and we need people to work with us to stop that,” she stressed.

The executive said it was asking medically vulnerable and older people living in the areas affected by the new restrictions to be “particularly careful” and follow all public health advice.

Deputy First Minister Michelle O’Neill said hospitals and care homes in those areas would also be advised to limit visitors, with one family member being allowed to visit once a week.

More frequent visits may be allowed only in “exceptional circumstances”, but that will be reviewed, she added.

“We may also have to add postcodes to this as the situation develops,” she said.

Mrs Foster said the executive needed to limit social interactions between households in order to “push down the rising curve of infection” in the areas with the highest rates of the virus.

The deputy first minister urged people outside of the affected areas “not to think they are invincible or immune”.

Ministers also agreed to provide about 600 pubs in Northern Ireland which do not serve food with a new indicative date to reopen.

The executive agreed that drink-only pubs can provisionally reopen on 21 September, but this will have to be ratified closer to the time.

Non-food pubs in the Republic of Ireland are also aiming to reopen on the same date but it is being kept under review.

Prof Ian Young, NI’s chief scientific adviser, told the press briefing he was satisfied the mitigations being taken by the hospitality industry would ensure it was safe to reopen.

Mrs Foster said at present, the “villain is not in businesses where numbers of customers are regulated”.

“It’s is in our homes – it is the house party, it is the dinner party – it is the few people coming around for drinks or coffee,” she added.

Hospitality Ulster said the decision to give pubs a new reopening date would “help secure hundreds of businesses and thousands of jobs that have been hanging in the balance”.

Bar the police turning up outside on a doorstep in a residential area, we are seeing that they are really clamping down on those large social gatherings that according to the data are happening in those BT areas and also in Belfast.

It is similar to what happened in Glasgow a number of weeks ago.

Obviously, Belfast is the most affected by this and people are being asked to really curtail going out; restricting how many people we can have in our back gardens and mixing between houses really is forbidden – but there are exemptions.

Asked how the measures would be enforced, Mrs Foster said she “hoped people will comply”.

She said she did not want it to reach the stage that measures had to be strictly enforced, but the law would be in place.

“We’re always very aware we’re asking people to do things they would not ordinarily do,” the first minister added.

The executive has also agreed to set up a minister-led group to consider compliance and enforcement of the regulations, to ensure “everyone follows the spirit and the letter of the law”.

The executive also agreed to give the green light to soft play areas in Northern Ireland reopening from Monday.

The Department of Health says the current R number – or reproduction rate – of coronavirus in Northern Ireland is between 0.3 and 1.4.

The R value is the number of people that one infected person will pass a virus on to, on average, and if the reproduction number is higher than one, then the number of cases increases very fast

Chief scientific adviser Prof Ian Young said although NI’s R number estimate appeared lower than it has been in recent weeks, there had been a “general increase in cases”.

It was also announced that from 04:00 BST on Saturday, anyone arriving in NI from Portugal, Hungary, French Polynesia and Réunion will be required to self-isolate for 14 days.

Quarantine-free travel is still allowed from the Portuguese islands, the Azores and Madeira.

Sweden will also be removed from the list of countries where quarantine measures are required.

The Department of Health said it would continue to monitor the situation in all countries.

All the announcements came as one more coronavirus-related death was recorded in the Newry, Mourne and Down area, with 79 new cases throughout NI also reported.

In the past seven days, there have been 177 new cases in the Belfast council area.

In the Republic of Ireland, no further deaths were reported on Thursday, with the total remaining at 1,781.

The Irish department of health revealed there had been 30,360 confirmed cases of the virus, after 196 more were recorded.