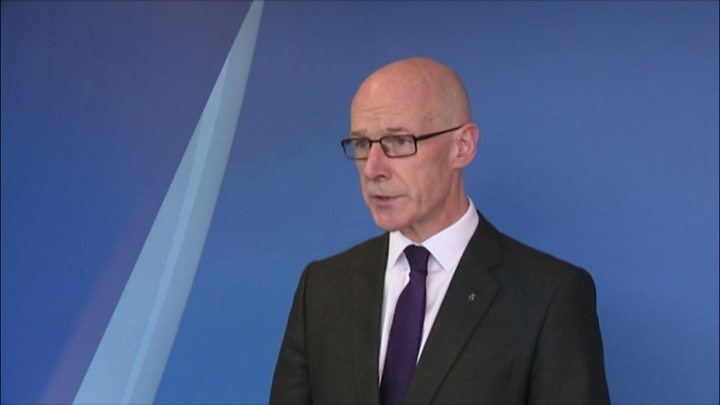 Image copyright PA Media Image caption The restrictions affect seven areas in and around Glasgow Tougher restrictions on home visits have been extended to Lanarkshire.People living in the area will not be able to meet other households in their homes from midnight on Friday.Similar measures are already in place in Glasgow, East and West Dunbartonshire,…

Tougher restrictions on home visits have been extended to Lanarkshire.

People living in the area will not be able to meet other households in their homes from midnight on Friday.

Similar measures are already in place in Glasgow, East and West Dunbartonshire, Renfrewshire and East Renfrewshire.

The extension to North and South Lanarkshire means the restrictions now cover more than 1.75 million people in the west of Scotland.

First Minister Nicola Sturgeon had earlier said that the number of new cases in the region was “causing some particular concern”.

A total of 205 positive cases of Covid-19 have been identified by Test and Protect in Lanarkshire in the past week.

Ms Sturgeon said: “It is clearly regrettable that these restrictions need to be extended to people living in Lanarkshire.

“I understand that this will not be welcome news for people living in these areas, especially ahead of the weekend, but we must act now to protect people and get more control over the virus in the area.”

More than 1.1 million people in the west of Scotland were already covered by the home visit restrictions. North and South Lanarkshire have a combined population of more than 661,000 people.

People living in the areas should also not visit someone else’s home, no matter where it is – although those in extended households can continue to meet indoors.

People from different households can continue to meet outdoors, and in pubs and restaurants, as long as they follow the guidance.

Only essential indoor visits will be allowed in hospitals and care homes, although outdoor visits to care homes will still be permitted.

If anyone is identified as a close contact of someone who has tested positive, their full household should self-isolate for 14 days.

Public health officials in Lanarkshire had warned last week that restrictions could be imposed if cases continue to rise.

Gabe Docherty, director of public health for NHS Lanarkshire, said: “Although we enter into these restrictions with a heavy heart, I wholeheartedly welcome them.”

On Thursday, Ms Sturgeon announced a reduction in the number of people who could meet, either indoors or outdoors, in Scotland.

No more than six people from two different households are allowed to gather together, although children under the age of 12 do not count towards the total.

Ms Sturgeon told her daily briefing on Friday that she had asked for advice on whether it would be possible to allow children from more than two households to meet in some circumstances – for example at birthday parties.

She said she hoped this could be clarified in the coming days.

The planned opening of theatres, live music venues and indoor soft play centres, which had been due to happen next Monday, has also been delayed until at least 5 October.