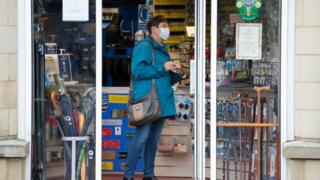 People in Wales must wear facemasks in shops and other indoor public spaces from Monday, the first minister has announced.

Mark Drakeford said the change came as 20 people in every 100,000 in Wales now had coronavirus.

Indoor meetings of more than six people from an extended household will be illegal from Monday.

The rule will not apply to children aged 11 and under. Up to 30 people from different homes can still meet outside.

Mr Drakeford said the rate of 20 people in 100,000 was the “threshold we use for people to have to quarantine coming back into the UK”.

He said if the figure fell, the advice on facemasks could be looked at again.

He added: “Lots of people in Wales do choose in any case to wear face coverings when they are out and about, what they will see now is that it will be compulsory for people to do that in shops – and that will happen from Monday, to give those people who haven’t got face coverings already a chance to get hold of them.

“What we want to do is educate, inform, persuade. And people in Wales have been so willing to play their part in keeping one another safe that I am confident we will see good levels of compliance in Wales.”

He warned masks were not “some sort of magic wand” but were “a sensible addition to the precautionary measures we are taking” in order to avert a crisis.

“We are introducing them now when in many parts of Wales the virus remains in low suppression,” Mr Drakeford said.

“But because we are detecting a rise, particularly in some parts of Wales, we want to try and take measures to get ahead of this curve and try to stop it rising it the way that we have seen elsewhere, so we do not have to take even more significant measure in future.”

Plaid Cymru leader Adam Price said the face coverings announcement “was very welcome” though the evidence on them was “never going to be 100%.”

He said advice about how and when to use them needed to be “clear”.

“We are at a critical point and we have to get a clear strong message out to the public,” he said.

Neil Butler of teachers union NASUWT said he was worried about schools: “What amazes me about the first minister’s statement this morning in terms of mandatory face coverings, in school classrooms where you’ve got these young adults crowded into classrooms, it’s the opposite.

“The Welsh Government is positively saying no, we do not want face coverings in those particular environments.”

Up to four households have been able to form an extended household and meet up since late August.

Until now, there has been no legal limit on how many people could gather.

Mr Drakeford said the rule of up to 30 people being allowed to meet outdoors would include peoples’ gardens.

The new restriction will apply in pubs and restaurants, as well as private homes.

It comes after people in Merthyr Tydfil and Rhondda Cynon Taff were asked to wear masks in indoor public spaces and in work, and only use public transport if it was essential.

The new rules will not apply in Caerphilly county borough, which was put under local lockdown on Tuesday, where all extended household meetings are currently banned indoors.

Mr Drakeford will confirm the changes as part of his review into Wales’ coronavirus restrictions at a press conference on Friday.

The move comes after other parts of the UK also restricted meetings to six – but did so both indoors and outdoors.

The UK government is restricting gatherings in England to just six people from Monday, with some exceptions.

The number of people that can meet in Scotland has also been cut to six.

Wales’ coronavirus rules mean people can only be part of a single extended household, which cannot be changed once arranged.

Despite the gradual easing of restrictions over the summer, meetings indoors with anyone outside your extended household have remained illegal.

The recent rise in cases seen in Caerphilly county was blamed on people socialising in other people’s homes in large numbers.

The area has seen one of the highest rates of cases in the whole of the UK, with 91.1 cases per 100,000 people over seven days.

On Thursday, residents of Rhondda Cynon Taff and Merthyr Tydfil were asked to follow a range of measures to avoid a local lockdown.

People have been asked to work from home if they can, not to visit care homes, and wear face masks in indoor or crowded public spaces.

Merthyr Tydfil has the second highest coronavirus case rate in Wales, after Caerphilly.