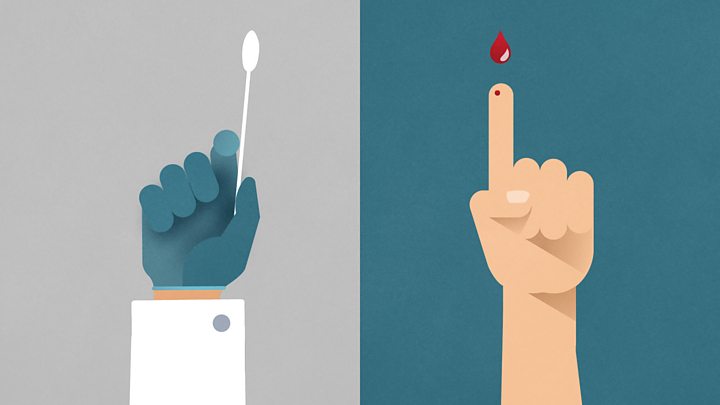 Image copyright PA Media An increase in demand for coronavirus tests has led to local shortages – with some people being directed to test sites hundreds of miles from their homes.Testing people and then tracing the contacts of those infected is considered vital to stop the disease from spreading. Should I get tested?Anyone showing symptoms…

An increase in demand for coronavirus tests has led to local shortages – with some people being directed to test sites hundreds of miles from their homes.

Testing people and then tracing the contacts of those infected is considered vital to stop the disease from spreading.

Should I get tested?

Anyone showing symptoms of coronavirus can be tested. These are:

The idea is to find people who have the virus and keep them isolated to avoid it being spread in the wider community.

What are the covid tests?

There are two types of tests.

The first checks if you are currently infected. A nose and throat swab is taken, which is then sent off to be processed at a lab.

New versions promising to deliver results in 90 minutes are being introduced in settings like hospitals and care homes. They can be processed using portable machines.

Tests on saliva are also being trialled, with samples again being analysed in a laboratory.

The second kind of test involves blood samples and looks for antibodies, which indicate past, not current infection. These are mainly being used to estimate what percentage of the population has had covid, rather than to diagnose individuals.

How do I book a test to check if I have coronavirus?

Tests can be taken by visiting either a drive-through or walk-through testing site, or a mobile testing unit.

They need to be booked – either online or by calling 119 if you have problems using the internet.

The Department of Health says you can find your nearest site by searching for “coronavirus testing” on Google Maps.

There are currently 236 mobile testing units, 74 drive-through sites, 21 satellite testing sites and 58 walk-through testing sites around the UK. The aim is to eventually have 500 sites in total.

Alternatively, you can order a home testing kit but only in the first four days of having symptoms – otherwise you have to visit a site.

However, some people have struggled to get appointments – with a director of England’s test and trace programme apologising, saying it was laboratories, not testing sites themselves, that were the “critical pinch-point”.

Can I be tested if I have no symptoms?

Generally only people with symptoms are told to apply for a test, with results expected inside 48 hours.

However, staff and residents in care homes should now be receiving regular tests, regardless of symptoms. Some hospital staff are routinely tested, but there is no national guidance stating that they must be.

If you don’t have symptoms, the government says you should not apply for a test – unless you are living in an area where there is a local lockdown.

How reliable are the tests?

When it comes to the most common type of diagnostic test, scientists at the University of Bristol believe 20% of positive cases could falsely appear as negative, wrongly telling someone they are not infected.

This can be because the swab sample wasn’t good enough, there were problems in the lab, or the stage of infection the patient was at when tested.

How many tests are being carried out?

Between 150,000 and 200,000 tests are processed each day. This includes antibody tests and those used to estimate how widespread the virus is.

The government has been challenged over its testing capacity and data, and has now changed the way it presents this. Figures now only include those which have been processed, whereas it previously included those which had been sent out – even if they didn’t come back.

Up until 2 September, the UK had performed 17.6 million tests.

It has also pledged to bring in mass coronavirus testing by the end of the year, even among people with no symptoms.

The prime minister wants 10 million Covid-19 tests a day by early next year – including some that give results in minutes. But experts warn laboratory capacity is an issue – and that the technology for more rapid testing does not yet exist.

How does the UK compare to other countries?

However, analysis from Our World In Data, a research team based at the University of Oxford, suggests the UK is now performing more tests than many other countries.

For example, the seven-day average up until 3 September showed the UK had carried out 2.5 tests per 1,000 people. This was ahead of European countries including France (1.8) and Spain and Germany (both 1.7).

When we adjust for countries’ populations, the UK is beaten in numbers of tests by a handful of countries in Europe, including Portugal, Lithuania and Iceland.

Have you been tested? Or are you waiting for a test?

Please include a contact number if you are willing to speak to a BBC journalist about your experience.