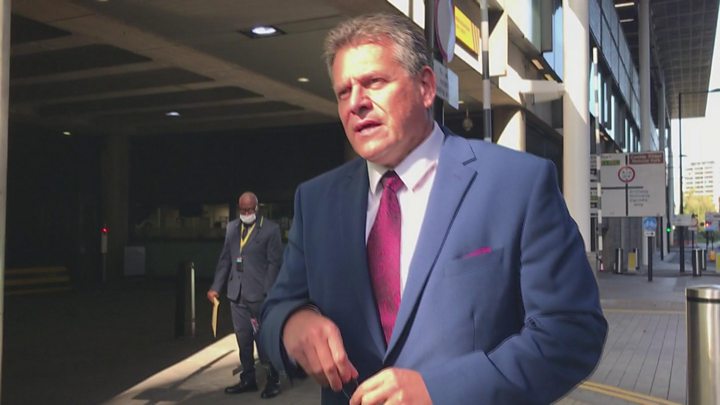 Media playback is unsupported on your device Media captionMaros Sefcovic: “Let’s hear what Michael Gove will tell me this afternoon.” The EU says it has “serious concerns” about UK moves to override key parts of the Brexit divorce deal.EU official Maros Sefcovic was speaking ahead of emergency talks with Cabinet Office minister Michael Gove on…

The EU says it has “serious concerns” about UK moves to override key parts of the Brexit divorce deal.

EU official Maros Sefcovic was speaking ahead of emergency talks with Cabinet Office minister Michael Gove on how the changes could affect Northern Ireland.

The government says it is trying to protect the UK’s internal market and the Northern Ireland peace process.

The source of the EU’s concern is Mr Johnson’s proposed Internal Market Bill, which was published on Wednesday.

It addresses the Northern Ireland Protocol – an element of the withdrawal agreement designed to prevent a hard border returning to the island of Ireland.

The bill proposes no new checks on goods moving from Northern Ireland to Great Britain. It gives UK ministers powers to modify or “disapply” rules relating to the movement of goods that will come into force from 1 January, if the UK and EU are unable to strike a trade deal.

Mr Johnson has defended the bill, saying it would “ensure the integrity of the UK internal market” and hand power to Scotland and Wales, while protecting the Northern Ireland peace process.

But critics – including a growing number of Conservative MPs – say the move will damage the UK’s international reputation after a minister admitted the plans break international law.

European Commission president Ursula von der Leyen said she was “very concerned” following the tabling of the bill in Parliament, and that such actions “undermine trust” with the EU.

Legal analysis circulated among EU member states found that the Internal Market Bill would breach the Brexit deal and could “open the way” for the EU to take legal action against the UK.

But EU lawyers say it is unlikely a case could be launched before the end of the year.

Maros Sefcovic has already spoken to Mr Gove by phone but said he has called this emergency meeting because he wants to hear in person precisely what the government’s intentions are.

Before leaving Brussels, Mr Sefcovic echoed other European leaders when he insisted the withdrawal agreement was not up for renegotiation.

He said he hoped Michael Gove would assure him that the letter, the spirit and the timetable of the agreement would be respected.

If not, there’s talk of Brussels possibly taking legal action.

The outcome of today’s meeting is also significant for the future of trade talks between the two sides.

The EU says it still wants a deal but that the UK respecting the withdrawal agreement is a prerequisite.

The meeting of the UK-EU Joint Committee, co-chaired by Mr Gove and Mr Sefcovic, will also be attended by Northern Ireland’s first minister and deputy first minister Arlene Foster and Michelle O’Neill.

Speaking ahead of the meeting, Mr Sefcovic said: “I came here to express the serious concerns the EU has over the proposed bill.”

Asked if he had lost trust in the UK government he said: “Let’s hear what Michael Gove will tell me this afternoon.”

It comes after the Speaker of the US House of Representatives insisted there was “absolutely no chance” of a US-UK trade deal if the Northern Ireland peace process was jeopardised.

Nancy Pelosi said in a statement: “Whatever form it takes, Brexit cannot be allowed to imperil the Good Friday Agreement, including the stability brought by the invisible and frictionless border between the Irish Republic and Northern Ireland.

“The UK must respect the Northern Ireland Protocol as signed with the EU to ensure the free flow of goods across the border.

“If the UK violates that international treaty and Brexit undermines the Good Friday accord, there will be absolutely no chance of a US-UK trade agreement passing the Congress.”

Meanwhile, the chief negotiators from the UK and the EU, Lord Frost and Mr Barnier, will meet face-to-face later in separate talks to help break the deadlock on negotiations for a future trade deal.

This latest round of negotiations are due to conclude on Thursday, and the UK government has said it is prepared to walk away if progress is not made soon.