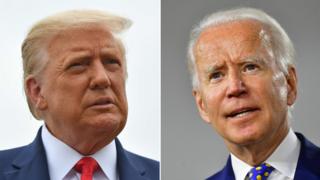 Image copyright Getty Images Abortion is arguably the most divisive issue in US politics – and with the presidential candidates promising to either revoke national rights to abortion or take extra steps to safeguard it, the stakes have never been higher.With President Trump in the White House, anti-abortion activists are energised and Republican-controlled states have…

Abortion is arguably the most divisive issue in US politics – and with the presidential candidates promising to either revoke national rights to abortion or take extra steps to safeguard it, the stakes have never been higher.

With President Trump in the White House, anti-abortion activists are energised and Republican-controlled states have tightened restrictions.

Yet public support for abortion rights is the highest in decades, according to the Pew Research Center, with 61% of people favouring legal access to the procedure – and that’s changed how Democrats talk about it.

Let’s compare where the presidential candidates stand on the issue.

Mr Trump’s key message: We are making it harder to get an abortion now, want to overturn federal protections and would support a near-total ban.

Mr Biden’s key message: We will protect a woman’s right to choose and fight to keep access to abortion legal.

While it might sound like an issue you’re either for or against, it’s important to understand the details.

What do the candidates say on abortion being legal?

Roe v Wade is the landmark Supreme Court ruling from 1973 which safeguarded the right to an abortion on the national level.

Mr Trump had promised in 2016 to pick judges who would “automatically” overturn Roe. While that hasn’t happened yet, he has installed hundreds of federal judges plus two conservative justices on the top court – and if the president wins re-election he could reshape the judiciary even further.

Conservative states, such as Alabama, have recently pushed near-total abortion bans in the hope a legal challenge against those restrictions will ultimately lead to Supreme Court toppling Roe v Wade.

Mr Trump has expressed support for banning abortion overall, except for cases of rape, incest or danger to the mother’s life.

Mr Biden, in contrast, wants to pass a federal law that protects a woman’s right to have an abortion – that’s something that more liberal states like New York have moved towards.

Enshrining Roe this way would mean that even if the Supreme Court bucks the precedent going back almost 50 years, that right would still exist.

What about federal funding for abortions?

Mr Trump has certainly delivered on his promise to curtail federal funding for abortions.

He’s also reinstated and expanded the Mexico City Policy, which prevents any US government global health funds from going to foreign groups that also provide or inform about abortions.

Mr Biden has pledged to rescind that so-called “global gag rule” in his agenda for women.

The Democratic candidate has also expressed support for repealing the Hyde Amendment, which blocks taxpayer money from being used for abortions except in cases of rape, incest or danger to the mother. It has meant that lower-income women who receive government aid for healthcare have not been able to access abortion services.

Mr Biden earlier in the campaign said he favoured the measure, but after criticism from his colleagues on the left, he changed his mind.

Why does the abortion debate matter in the election?

It remains a key issue for Mr Trump’s conservative base, and a deal-breaker for many in the evangelical or Catholic communities.

An August Pew Research Center poll found 46% of Mr Trump’s supporters and 35% of Mr Biden’s say abortion is a “very important” factor in how they’ll vote this year.

Anti-abortion activists see this election as a chance to build on the severe restrictions they put on abortion services in some states in 2019 and again during pandemic lockdowns. And if they’re fired up that helps Republican turnout not just in the presidential race, but in significant state and congressional contests too.

Though Mr Trump won the overwhelming majority of the white evangelical vote in 2016, now that he’s up against lifelong Catholic Mr Biden, some of that support could waver.

Polls suggest Mr Biden is viewed as more religious and has been doing slightly better among white religious voters than Hillary Clinton did in 2016. His views on healthcare, the pandemic and racial equality are also favourable for some religious voters for whom abortion isn’t the top issue.

The US election is in November – and the BBC wants to answer your questions about everything from policies, like abortion rights, to the voting process.

Please submit your questions below.