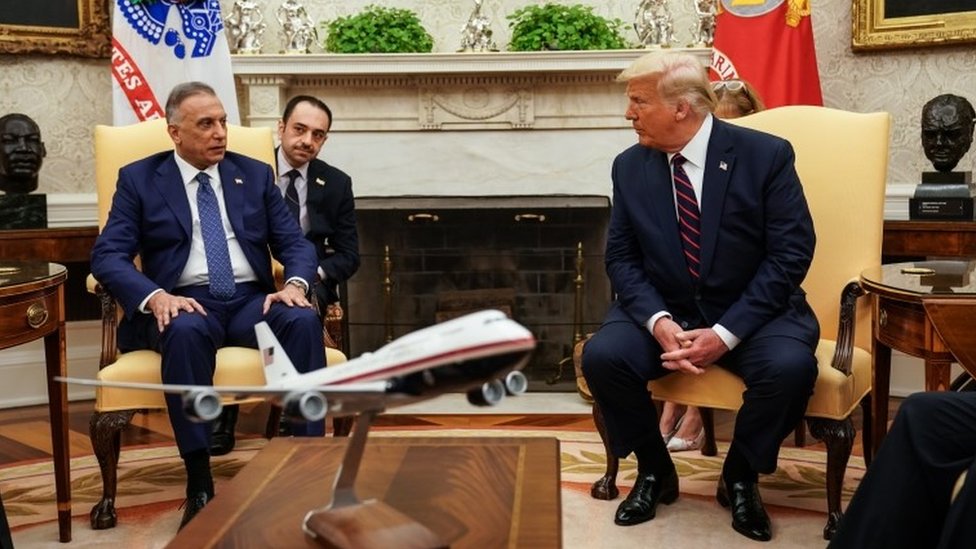 Publishedduration29 minutes agoimage copyrightReutersimage captionUS troops have been deployed to Iraq since 2014 to help combat the Islamic State groupThe US will withdraw more than a third of its troops from Iraq within weeks, its top Middle East commander has said.Gen Kenneth McKenzie told reporters the troop presence would be reduced from about 5,200 to…

The US will withdraw more than a third of its troops from Iraq within weeks, its top Middle East commander has said.

Gen Kenneth McKenzie told reporters the troop presence would be reduced from about 5,200 to 3,000 during September.

Those remaining will continue to advise and assist Iraqi security forces in “rooting out the final remnants” of the jihadist group Islamic State (IS).

Last month, US President Donald Trump reaffirmed that he planned to pull all troops out of Iraq as soon as possible.

He is expected to hail the reduction of forces as progress towards his 2016 election campaign promise to disentangle the US from “endless wars”.

The presence of US troops has also become a major issue in Iraq since the US killed top Iranian general Qasem Soleimani in a drone strike in Baghdad in January.

What is the reason for the move?

During a visit to Baghdad, Gen McKenzie said the US military had confidence in the Iraqi Security Forces’ increased ability to operate independently and to deal with the continuing threat of IS, which once controlled huge swathes of Iraq.

“In recognition of the great progress the Iraqi forces have made and in consultation and co-ordination with the government of Iraq and our coalition partners, the United States has decided to reduce our troop presence in Iraq from about 5,200 to 3,000 troops during the month of September,” he told reporters.

“This reduced footprint allows us to continue advising and assisting our Iraqi partners in rooting out the final remnants of [IS] in Iraq and ensuring its enduring defeat,” he added.

Gen McKenzie said the US would continue expanding “partner capacity programmes”, and that its ultimate goal was having local forces who were capable of preventing a resurgence of IS and securing Iraq’s sovereignty without help.

Why are US troops in Iraq?

In 2003, US-led forces invaded Iraq to overthrow President Saddam Hussein and eliminate weapons of mass destruction that turned out not to exist.

President George W Bush promised a “free and peaceful Iraq” but the country was engulfed by a sectarian insurgency that cost tens of thousands of lives.

US combat troops withdrew from Iraq in 2011 after President Barack Obama’s administration failed to negotiate a new agreement governing their status.

In 2014, when IS seized control of large parts of Iraq, US forces returned at the invitation of the Iraqi government as part of an international coalition tasked with training and advising the Iraqi security forces.

The Baghdad government declared the military defeat of IS at the end of 2017 but about 5,000 US personnel remained to help Iraq prevent a jihadist resurgence.

Despite continuing attacks by IS sleeper cells, some Iraqi political groups – many of them linked to Iran – began demanding that US and other foreign troops leave.

Those calls attracted widespread support following the drone strike that killed Soleimani, an Iranian Revolutionary Guards commander who Mr Trump alleged was the “number-one terrorist anywhere in the world”.

The attack was condemned by then caretaker Prime Minister Adel Abdul Mahdi as a “clear breach of the terms of the American forces’ presence”.

The Iraqi parliament subsequently approved a non-binding bill urging the government to “cancel the request for help it presented to the international coalition”. However, it was never implemented.

US officials have also accused Iran-aligned Iraqi militias of carrying out a series of rocket attacks targeting foreign military and civilian personnel, including one in March that killed two Americans and one British soldier.