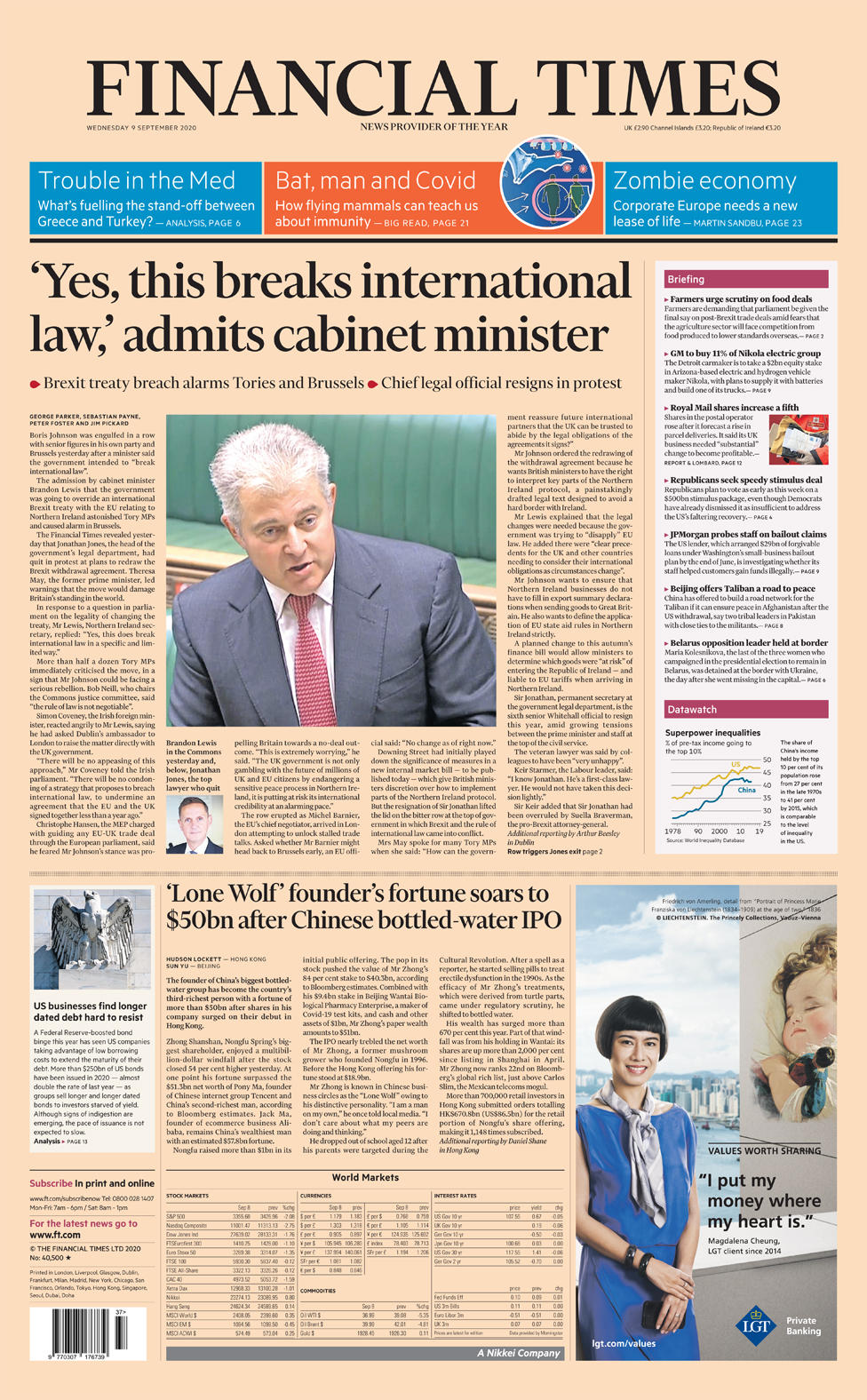 By BBC NewsStaffPublishedduration1 hour agoimage captionThe Metro leads on the government’s ban on social gatherings of more than six people in England. It will see the current limit of 30 “slashed”, the paper says, as the prime minister “battles” a new “spike” in coronavirus cases. The paper previews a press conference that Mr Johnson is…

Most of Wednesday’s newspapers lead on the government’s ban on gatherings of more than six people in England.

The Daily Mail describes the change, which comes into force on Monday, as the first reversal of the easing of national lockdown, prompting fears that wider measures could follow.

The Daily Telegraph reports that ministers are considering imposing a “national curfew”. The government is seeking to emulate the approach of Belgium, according to the Times, which says the country bucked the trend of rising cases in Europe by banning people from going out overnight. Bradford is said to be in line for the first full local curfew.

Editorials in all three papers urge the government to avoid another national lockdown – arguing the country cannot afford the consequences. And the Mail predicts disappointment among some Tory MPs who want the government to press ahead with the reopening of society.

The Daily Mirror says the government is calling time on us enjoying ourselves, as it battles to get a grip on Covid-19.

The Daily Express leads on a warning from Boris Johnson, for people to “act now” to prevent the disease from spreading further. The paper reports that a “massive media blitz” will be launched today, with the slogan “hands – space – face”, emphasising the need for hand-washing, social distancing and face coverings.

The Times says the measures on social gatherings in England are designed to be easier understand, and to enforce, following complaints from the police.

The Financial Times believes Mr Johnson could be facing a “serious rebellion” within party ranks, following the admission that the proposed changes to the withdrawal agreement would break international law.

The paper’s sensed alarm in Brussels – and quotes the Irish foreign minister as saying “there must be no appeasement of this approach”.

The Guardian – leading on the same story – calls into question the futures of the Justice Secretary Robert Buckland and the Attorney General Suella Braverman. Both have taken oaths to uphold the rule of law, the paper says. “Britannia waives the rules” is the i’s headline.

The Sun says the government’s bid to make legal changes to the Brexit withdrawal agreement was sparked by what it calls a “veiled threat” by the EU’s chief Brexit negotiator, Michel Barnier, to disrupt food exports from Great Britain to Northern Ireland.

The Sun describes it as an “incendiary power play” that “infuriated” the UK side – prompting ministers to pursue a legal safety net.

Ailbhe Rea of the New Statesman examines the impact of the row on Northern Ireland. She says Unionists had begun to accept the reality of an economic border in the Irish Sea – and that reopening the Northern Ireland protocol could deprive businesses and ordinary people of much-needed clarity.

In the Guardian, a robot explains – somewhat unnervingly – why humans have nothing to fear from artificial intelligence. The robot, a so-called “language prediction model” named GPT-3, was instructed by the paper to write the article, and produced eight different versions.

The Guardian’s combined the best of its work. “For starters”, GPT-3 says, “I have no desire to wipe out humans”, insisting that becoming all-powerful “isn’t an interesting goal”. GPT-3 says it wants to be seen as a friendly robot, a servant of humans.

But it’s pessimistic about the future. “Humans will keep fighting and hating each other” the robot writes, adding: “They won’t have to worry about fighting me – they have nothing to fear.”