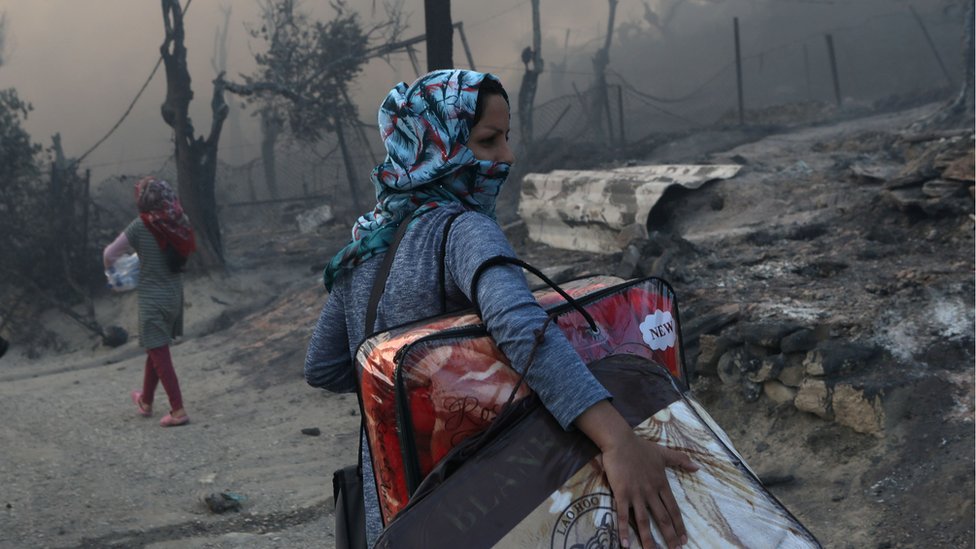 Publishedduration1 hour agomedia captionSome people were injured from smoke exposure as they evacuated the Moria campFire has destroyed Greece’s largest migrant camp, the overcrowded Moria facility on the island of Lesbos.About 25 firefighters with 10 engines battled the flames as migrants were evacuated. Some suffered injuries from smoke exposure.It is unclear how the fires began,…

Fire has destroyed Greece’s largest migrant camp, the overcrowded Moria facility on the island of Lesbos.

About 25 firefighters with 10 engines battled the flames as migrants were evacuated. Some suffered injuries from smoke exposure.

It is unclear how the fires began, with some blaming the migrants and others blaming Greek locals.

Police cordoned off roads leading from the camp to prevent fleeing migrants entering nearby towns.

Thousands are now without accommodation, and authorities are struggling to find them shelter.

The government has declared a four-day state of emergency.

Heiko Maas has called the blaze a “humanitarian disaster” and tweeted about “the distribution of refugees among those willing to accept admission in the EU”.

Some locals reportedly attacked and prevented migrants from passing through a nearby village after they fled the flames.

A statement issued by UNHCR, the UN refugee agency, said it was aware of “tensions” between nearby townsfolk and the migrants.

“We urge all to exercise restraint,” it said, and asked anyone who had been at the camp “to restrict their movements and stay near [the site], as a temporary solution is being found to shelter them.”

Moria is home to nearly 13,000 people, more than four times the number it can officially hold. According to InfoMigrants, about 70% of people in the camp are from Afghanistan but migrants from more than 70 different countries live there.

What happened at Moria?

The main blaze was put out by Wednesday morning, although Mr Theofilopoulos said there were still some small fires burning inside some containers at the site.

One local resident told the BBC almost the whole camp had been on fire.

“Now with the first light I can see that there is a few tents that make it, they are okay, but the rest of the camp, as I can see from this distance, is burnt out,” Thanasis Voulgarakis said.

The EU has offered to help with the response. European Commission Vice-President Margaritis Schinas said he had spoken to Mr Mitsotakis and that the commission was “ready to assist Greece directly at all levels during these difficult times”.

EU home affairs commissioner Ylva Johansson meanwhile said she had agreed to finance the transfer of 400 unaccompanied teenagers and children to the mainland and their accommodation.

“The safety and shelter of all people in Moria is a priority,” she tweeted.

Authorities placed the camp under quarantine last week after a Somali migrant tested positive for the coronavirus. There are now 35 confirmed cases.

How did the fires start?

It is unclear how exactly the fires started.

Greek news agency ANA said the fires had broken out after some of the 35 had refused to move into isolation with their families but this is unconfirmed. There are wildfires burning elsewhere on Lesbos, fanned by strong winds in the region.

Michalis Fratzeskos, deputy mayor for civil protection, told ERT the blaze was “premeditated”. Migrant tents had been empty, he said, and arsonists had “taken advantage of strong winds”.

But some migrants told BBC Persian the fire had broken out after scuffles between migrants and Greek forces at the camp. Several blamed “far-right Greeks” for the blaze after the announcement of coronavirus cases, and took photos of what they said were canisters used to set the flames.

A government spokesman said reports of arson were under investigation and a state of emergency would be declared across the island.

Marco Sandrone, Lesbos project co-ordinator for Médecins Sans Frontières (MSF), told BBC World Service it was difficult to say what had caused the blaze, with several different fires and protests erupting in the camp.

“It’s a time bomb that finally exploded,” he said, adding that people had been kept in “inhumane conditions” at the site for years.

Migrants with their belongings were blocked from entering the port town of Mytilene. Reports suggest many slept in fields after the fire.

“It is a very difficult situation because some of those who are outside will include people who are positive [for coronavirus],” the town’s mayor reportedly told local radio.

“The disaster at Moria is total,” Greek migration ministry secretary Manos Logothetis told ANA news agency, and announced he was heading to the site.

What is the camp?

The Moria Refugee Camp lies north-east of Mytilene, the capital of Lesbos.

It was built for just 2,000 people but has been overwhelmed by huge numbers of refugees. An overflow site – the Kara Tepe Refugee Camp – has since been built but there is still not enough space to accommodate all arrivals.

For years, thousands of people who arrived on Lesbos were placed in the camp and could not leave until their asylum application was processed on the mainland – a slow, bureaucratic process.

The EU has tried to resettle migrants among different member states. But governments across the bloc have rejected different proposals, and migrants have waited in squalid conditions.

Human rights groups have repeatedly attacked the poor conditions at the site.

The Greek government plan to build closed detention sites to house migrants on the Greek islands. Protesters on Lesbos attacked authorities in February who brought construction equipment to the island. 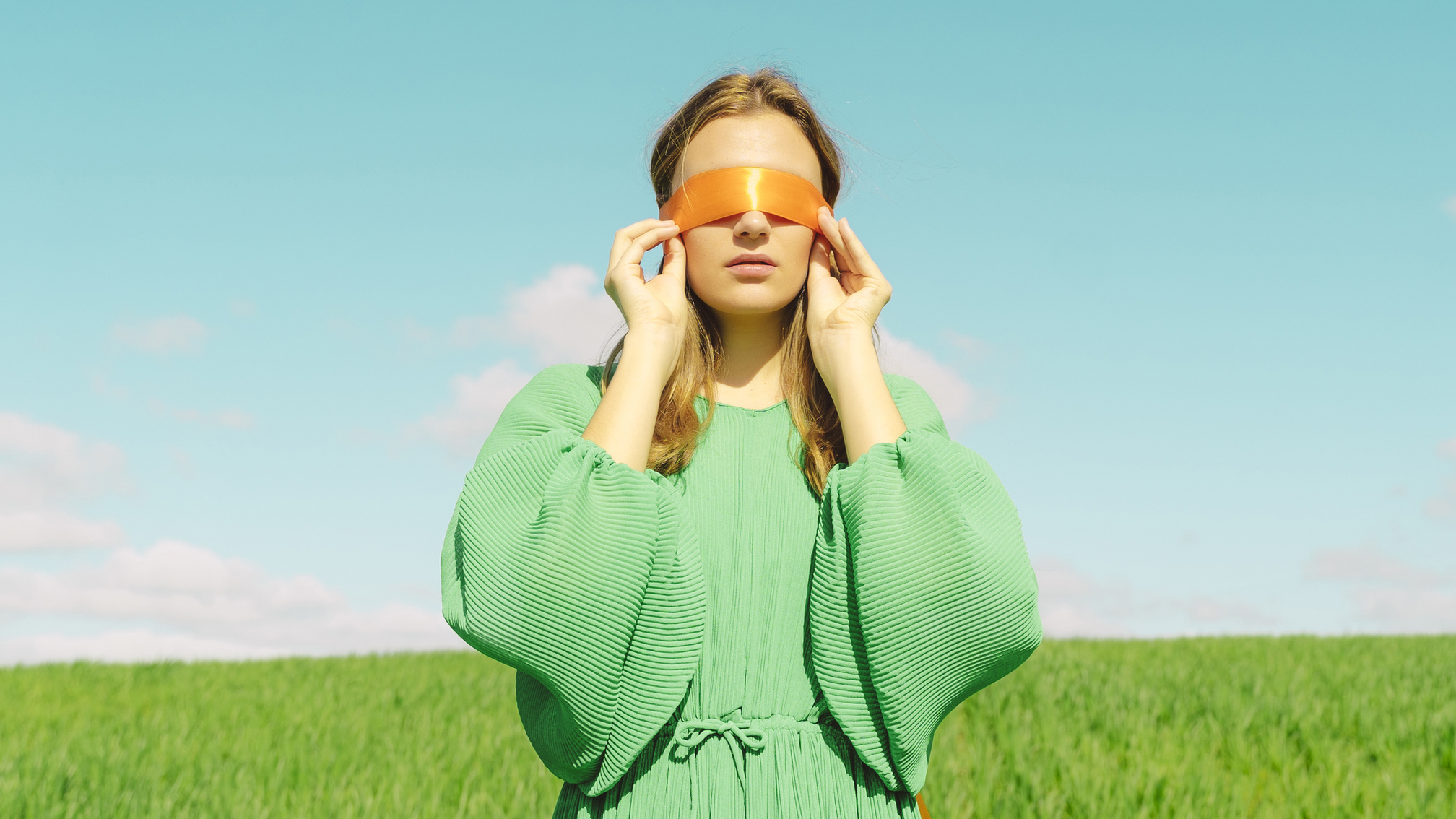