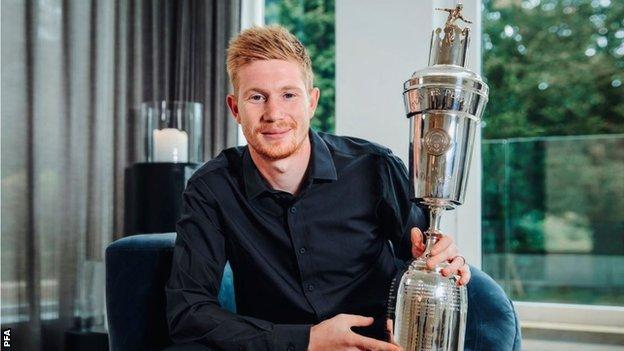 De Bruyne, 29, praised City manager Pep Guardiola for helping him earn the honour, saying “he just lets me be me”.

Jordan Henderson was among five Liverpool players to be named in the Premier League team of the season.

The Belgian is the first Manchester City player to win the award since its inception at the end of the 1973-74 season.

“This is a big honour,” he said. “To be voted by your colleagues, competitors from other teams who you always play against on the field. That they vote for you for best player; it’s amazing.

“It’s maybe strange that I’m the first one at City, seeing all the good players who played there before and who are still playing. But it’s nice to represent the club.”

On Guardiola, he said: “He gives me a lot of freedom; I don’t know why, that’s just the way it goes between us.

“He knows in one way I will always put the team first and then obviously if I can help myself I’m going to do that. He trusts me completely.”

For the third consecutive year, the top award for the men’s category went to a player whose team did not win the Premier League title.

Reds pair Van Dijk and Mohamed Salah were the past two winners and went on to lift the trophy last season, having come close in previous years.

England, meanwhile, scored 21 goals in all competitions for the Blues and prevented Arsenal’s Vivianne Miedema claiming the women’s award twice in a row.

“It’s a huge honour to be voted for by your fellow peers, so thank you to everyone who voted for me,” England said.

Teams of the year

Do the analysts agree?

London-based investment company Carteret Analytics worked out a rating for each player on the PFA shortlist by calculating how much they contributed to their team winning football matches.

According to its research, De Bruyne was predicted to win the PFA men’s Player of the Year award, scoring 382.4 in its rating system. Van Dijk was closest to the Belgian with 357.5.

PFA Player of the Year

According to Carteret ratings

Meanwhile, Manchester United forward Rashford should have been the young player of the year, according to Carteret, with a rating of 314.4.

PFA Young Player of the Year

Sports analysis company Gracenote also produced their own ‘Global Player Index’ rankings, which are based on how a team performs when a specific player is on the pitch.

Gracenote’s head of sports analysis, Simon Gleave, told BBC Sport: “Salah is the best player in England given how Liverpool perform when he is on the field. He is followed by his team-mates Mane and Firmino.

“Four of the six nominees for the PFA Player of the Year are ranked in the top six of the Global Player Index for players currently in England. Raheem Sterling is eighth and Jordan Henderson is 13th.

“Henderson is ranked highest of all the players who are 30 or over, just ahead of Manchester City’s Kyle Walker.”

Gleave added: “Alexander-Arnold is currently by far the best young player in England given how Liverpool perform when he is on the field. He is followed by Manchester City’s [Phil] Foden and Rashford of Manchester United.

“All six of the players nominated for the PFA Young Player of the Year award are ranked in the Global Player Index top 10 of players in England born after 1 July 1998.”