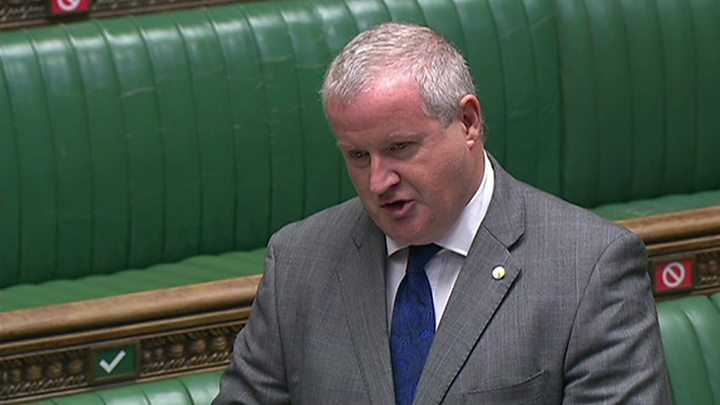 Image copyright Jessica Taylor/UK Parliament Boris Johnson has urged MPs to support a bill which modifies the Brexit deal he signed with the EU in January. The PM said the Internal Markets Bill would “ensure the integrity of the UK internal market” and hand power to Scotland and Wales.He also claimed it would protect the…

Boris Johnson has urged MPs to support a bill which modifies the Brexit deal he signed with the EU in January.

The PM said the Internal Markets Bill would “ensure the integrity of the UK internal market” and hand power to Scotland and Wales.

He also claimed it would protect the Northern Ireland peace process.

The Scottish government has not ruled out legal action to prevent it becoming law.

Scotland’s First Minister Nicola Sturgeon said: “The Tories’ proposed bill for a so-called UK internal market is an abomination. It is a naked power grab which would cripple devolution.”

The European Commission has called for an extraordinary meeting to discuss the bill’s contents.

Commission President Ursula von der Leyen said: “Very concerned about announcements from the British government on its intentions to breach the Withdrawal Agreement. This would break international law and undermines trust.”

The PM’s spokesman said it had been agreed “at pace in the most challenging possible political circumstances” to “deliver on a decision by the British people”.

It had been signed “on the assumption that subsequent agreements to clarify these aspects could be reached”, the spokesman added.

Downing Street welcomed the idea of an “extraordinary meeting” with the European Commission to discuss the proposed changes and said it would be setting a date as soon as possible.

It comes as talks on securing a post-Brexit trade deal with the EU continue in London.

Remit of the bill

The new bill sets out rules for the operation of the UK internal market – trade between England, Scotland, Wales and Northern Ireland – after the end of the Brexit transition period in January.

The bill explicitly states that these powers should apply even if they are incompatible with international law.

Ministers say the legislation is needed to prevent “damaging” tariffs on goods travelling from the rest of the UK to Northern Ireland if negotiations with the EU on a free trade agreement fail.

But senior Conservatives have warned it risks undermining the UK’s reputation as an upholder of international law.

Former Prime Minister Sir John Major said: “For generations, Britain’s word – solemnly given – has been accepted by friend and foe. Our signature on any treaty or agreement has been sacrosanct.

“Over the last century, as our military strength has dwindled, our word has retained its power.

“If we lose our reputation for honouring the promises we make, we will have lost something beyond price that may never be regained.”

In the withdrawal agreement with the EU, Northern Ireland is still in the UK, but it has to follow elements of the EU’s customs code.

This bill will be seen by the EU as a pretty brazen attempt to override the deal that has been done.

The bill contains the words “notwithstanding” – that basically means this law sets aside a law we have already agreed.

That was described to me earlier in the week as being a completely nuclear option.

And they have pressed it.

This row isn’t going to go away.

Speaking at Prime Minister’s Questions, Mr Johnson said: “My job is to uphold the integrity of the UK but also to protect the Northern Ireland peace process and the Good Friday Agreement.

Commenting on a similar argument by Health Secretary Matt Hancock, a former minister told the BBC: “I cannot allow anyone to get away with saying the government is doing this to protect the peace process. This does the precise opposite.

“It is about the internal market in the UK and is more likely to lead to a hard border [between Northern Ireland and the Republic of Ireland] which will imperil the peace process.”

Labour is looking at “potential amendments” to the UK Internal Markets Bill amid “serious concerns”, a spokesman for leader Sir Keir Starmer has said.

The legislation will see Scotland, Wales and Northern Ireland handed powers in areas such as air quality and building efficiency currently regulated at EU level.

It will also set up a new body – the Office for the Internal Market – to make sure standards adopted in different parts of the UK do not undermine cross-border trade.

The Scottish government fears the UK single market will cut across areas that are usually devolved.

For example, if the UK government decides some food imports are acceptable in England then they would also be allowed in Scotland, even though agriculture is devolved.

The new body will be able to issue non-binding recommendations to the UK Parliament and devolved administrations when clashes emerge.

The SNP’s leader at Westminster, Ian Blackford described the Internal Markets Bill as “nothing short of an attack on Scotland’s parliament and an affront to people of Scotland”.

He accused Boris Johnson of flouting international laws and “creating a rogue state”.

Mr Johnson said the Internal Markets Bill will be “protecting jobs, protecting growth, ensuring the fluidity and safety of our UK internal market and prosperity throughout the United Kingdom”.

He described it as a “massive devolutionary act” that would represent a “very substantial transfer of power and sovereignty” to Scotland and Wales.

But his words did not prevent the resignation of a senior Conservative in Wales, where the party is in opposition.

David Melding, shadow Counsel General, said in his resignation letter that the PM’s actions in the past few days had “gravely aggravated” the dangers facing “our 313-year-old Union”.