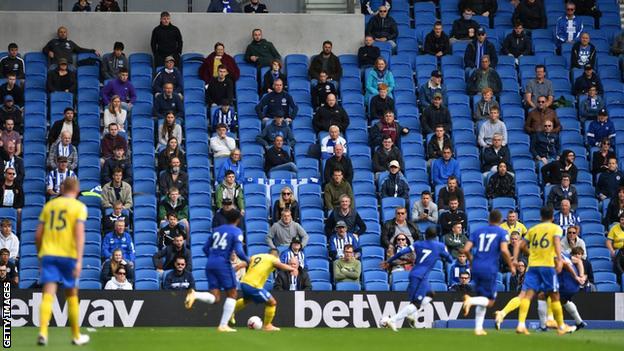 There were 2,500 fans at a pre-season friendly between Brighton and Chelsea in August as part of a government trialPremier League chief executive Richard Masters says it is “absolutely critical” that fans are allowed back inside stadiums as soon as possible.He says failure to do so will cost clubs £700m during the 2020-21 season, which…

Premier League chief executive Richard Masters says it is “absolutely critical” that fans are allowed back inside stadiums as soon as possible.

Football has been played behind closed doors since its return in June following the coronavirus lockdown.

As it stands, no fans will be admitted to top-flight matches before October at the earliest.

But Masters told BBC Sport that matches behind closed doors “can’t go on forever”, as clubs have already lost more than half a billion pounds from the disruption to the final quarter of last season.

“We have to get back to fans inside stadia as quickly as possible – that’s the big thing that’s missing, economic or otherwise – we need fans back inside stadiums for all sorts of reasons and it’s the number one priority,” he said.

Masters also revealed he was still hopeful some fans could return to grounds next month, despite the rising number of cases of coronavirus in the UK and the government’s new restriction on gatherings of more than six people, which comes into effect on Monday.

He admitted clubs “would have to adapt” because “there will be bumps in the road”.

“It doesn’t lower our ambitions – it just means that we’ll have to adapt – it’s one thing we’ve shown over recent months, we’re able to adapt to the situation,” Masters said.

“We always knew September was going to be a difficult month at the start of the return to normality the government was talking about, and so we should anticipate bumps in the road.”

Premier League revenue was down £700m in the final quarter of last season.

“It’s not just the loss of matchday revenue,” he said. “Every Premier League match on average generates about £20m for the economy both local and national so we want to play our part in helping the economy to recover as well.

“I think perhaps there is a perception the Premier League economy can withstand just about anything, but if you do lose £700m out of a planned budget it’s going to affect things and clubs have had to make some very difficult decisions.

“That is why it is important we focus on those three key objectives and obviously everyone hopes that from next season we can return to full normality, but it’s a huge challenge going forward.

“Financial issues are very real, they’re there, economic uncertainty is in front of us, and we just have to have a clear plan and stick to it.”