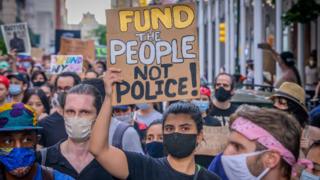 Image copyright Getty Images Image caption There have been renewed calls for defunding, after the death of George Floyd in May President Trump has claimed that his Democratic rival for the presidency, Joe Biden, supports the idea of defunding the police.Mr Biden has said he will not take money away from police forces. He wants…

President Trump has claimed that his Democratic rival for the presidency, Joe Biden, supports the idea of defunding the police.

Mr Biden has said he will not take money away from police forces. He wants to invest in community projects and social programmes to lessen the burden on the police.

There have been calls to divert money from the police to spend on other services, after the death of George Floyd at the hands of a Minneapolis police officer in May.

What has Biden promised on police funding?

A statement from Mr Biden’s communications team on 8 June said he supported the need for reform, focusing on funding educational programmes as well as mental health and drug abuse treatment projects, to allow police officers to focus on the job of policing.

These programmes should be separate from funding for the police, it says.

Mr Biden’s campaign website also pledges a $300m investment in community policing, which would be conditional on hiring police officers who “mirror the racial diversity of the community”.

He also proposes additional funding for body-worn cameras for the police.

In an interview with CBS News in June, Mr Biden said he didn’t support defunding the police, adding: “I support conditioning federal aid to police, based on whether or not they meet certain basic standards of decency…”

Mr Biden also wrote an opinion piece that month in USA Today, stating: “While I do not believe federal dollars should go to police departments violating people’s rights or turning to violence as the first resort, I do not support defunding police.”

Why is Biden accused of supporting defunding?

An interview Mr Biden gave in July led to accusations that he did support taking money from the police, after an edited version was posted on Twitter by Republican Congressman Steve Scalise.

In this version, Mr Biden answers “Yes” to a question about whether he agrees with redirecting funding.

President Trump referred to this when addressing the Republican Party convention, adding that if Mr Biden became president “the radical left will defund police departments across America.”

But the video as posted by Mr Scalise was flagged by Twitter as manipulated because of the way the words “for police” were edited into the question about funding.

In the unedited original, the interviewer, Ady Barkan says: “We can reduce the responsibilities assigned to the police and redirect some of the funding for police into social services, mental health counselling, and affordable housing.”

Joe Biden begins talking about various types of police reforms he wants to see, when Mr Barkan interrupts to ask: “But do we agree that we can redirect some of the funding?” He doesn’t mention the word “police” in the question, but Mr Biden anyway responds: “Yes, absolutely.”

Republican Steve Scalise deleted his Twitter post with the video clip, but defended his view that Mr Biden was talking about police funding. The Biden campaign called the edited video a “deep fake.”

Who does support defunding the police?

There are some high-profile Democrats who support a reduction in funding.

New York Congresswoman Alexandria Ocasio-Cortez is among the proponents of defunding police departments and reinvesting the money in local communities.

New York mayor Bill de Blasio has moved to cut $1 billion from the city’s police department budget, shifting the funds to youth programmes – although Congresswoman Ocasio-Cortez has said this was achieved through “budget tricks”.

The Los Angeles mayor, Eric Garcetti, has taken $150m from the police department budget to spend on other local programmes.

In other cities, such as Washington DC, San Francisco and Baltimore, local policymakers have declared their support for some form of defunding.

And in Minneapolis, the city council has pledged to dismantle the entire police department, although it’s not yet clear what would replace it.

The Black Lives Matter movement has begun a petition to defund the police, saying: “We call for a national defunding of police. We demand investment in our communities and the resources to ensure Black people not only survive, but thrive.”

Supporters of defunding believe that more spending on education, housing and healthcare, rather than law enforcement, would help reduce crime, meaning fewer police officers would be needed.

But critics argue that defunding won’t address the reforms that are needed to police training and procedures, or improve how the police operate in the community.

How much money do police departments get?

Most of the spending on police departments actually comes directly from local governments, with the rest coming from federal government grants.

The latest data compiled by the Washington-based Urban Institute research organisation, shows around $115 billion was spent on policing across the US in 2017.

This amount has consistently grown over the last 50 years.

Overall, crime rates have been dropping across the country since the 1990s, although in some US cities murder rates are up this year compared with last year.

A recent poll found that 60% of Americans opposed reducing the budgets of police departments and re-allocating the money to other social programmes.