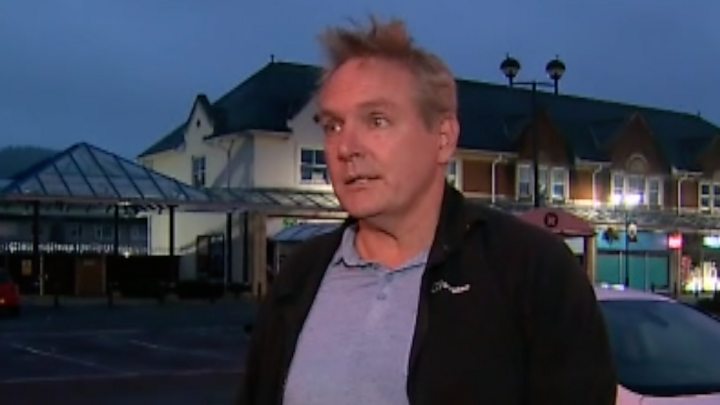 Media playback is unsupported on your device Media captionMixed reaction as Caerphilly placed under lockdown Wales’ first local lockdown will last until at least October, the health minister has said.From 18:00 BST on Tuesday no-one will be allowed to leave Caerphilly county without good reason.Vaughan Gething said new restrictions on the 181,000 people living in…

Wales’ first local lockdown will last until at least October, the health minister has said.

From 18:00 BST on Tuesday no-one will be allowed to leave Caerphilly county without good reason.

Vaughan Gething said new restrictions on the 181,000 people living in the county would last for weeks, at least into October.

Family and friends living apart will no longer be able to meet indoors, stay overnight, or form extended households.

It comes after a spike in cases, with 98 people testing positive in a week.

The Welsh Government said, with 55.4 coronavirus cases per 100,000 population, the county had the highest rate in Wales and one of the highest in the UK.

Mr Gething said he had been forced to act due to the increase in cases, after “social distancing had broken down in large parts”.

He told the Today programme that testing in Caerphilly found 4% of people were positive for coronavirus.

“If we had testing positivity rates of 4% [across Wales], I think we would be into national lockdown,” he said.

Speaking on BBC Radio Wales, he added: “Even a week ago we comfortably had the lowest rate of coronavirus of any of the UK nations. We’re now in a position a week later where we’ve seen a significant spike in activity.

“If we don’t address the issue in Caerphilly, we’ll see wider community transmission within the Caerphilly area but that will spread to other areas as well.

“We’re in this position largely because social distancing has broken down and in particular people are socialising in each other’s households in larger numbers.

He appealed for people to “please follow the rules. It’s for you, your family and the whole community”.

Mr Gething said significant transmission “isn’t taking place in pubs” but an element of it was people coming back from European travel, along with socialising in homes.

He said people who were having house parties with 20 to 30 people were clearly not following the rules.

People with reasonable causes could still leave the borough, he said.

“If you have to go to work, if you have caring responsibilities or if you absolutely have to move house, that should be covered but going from Caerphilly to Cardiff for a night out or to go to the gym isn’t covered.

“If things deteriorate faster we may have to take more measures.”

“We’re in it for several weeks at least in Caerphilly. We expect the rate to rise in the next few days because community transmission has already taken place.

“I can’t over-state the seriousness of the situation that we are in.”

What does the local lockdown mean?

The local lockdown was announced by the Welsh Government after 18:00 on Monday, giving people less than 24 hours to prepare for the changes.

A reasonable excuse for travel includes for work, if you are not able to work from home, or for making a compassionate visit, or to give care.

But schools, pubs, bars and restaurants will remain open.

More details are expected to be published by the Welsh Government on Tuesday, which said the rules would be kept under review and be enforced by the council and police.

What do people in Caerphilly say?

Sarah Bruton, manager of Captiva Spa, said the spike showed Covid-19 was going to be “part of our lives for a very long time”.

“It’s going to be really tough for a lot of people. We’ve started to make plans to see family, to book holidays, in my case to rebuild our business and that’s going to be taken away again,” she added.

Ms Bruton said it was not her experience that people were failing to follow social distancing rules: “What we’ve noticed in the salon is the impact the lockdown has had on people, so there’s nervousness and anxiety about being out, there’s a lack of social interaction perhaps from working at home, loneliness, right up to serious impact on clinical and mental health.

“We’ve spent so much time, energy and money making our premises c-secure over the past two months and really trying to invest confidence in people. I really hope that isn’t undone by this.”

“We saw it coming which is why we made the decision last Thursday,” he said.

“We’re feeling that hopefully this is a step which will take us in the right direction towards getting over it.

“There’s a lot of people who are just currently rebuilding their businesses [and] it’s not a step anyone would want to take but hopefully it will see us reduce numbers fairly quickly.

He thought it would be a “good idea” to close bars and pubs for the meantime.

“There’s a lot of businesses that can’t operate like ours as a takeaway and I do think it would help reduce numbers quicker if businesses closed… but I can understand why some people will continue to operate.”

Tell us how you will be affected by the lockdown:

Caerphilly MP Wayne David said things were getting worse and more people were suffering from symptoms.

“I hope very much that people will comply absolutely,” he said, but acknowledged things would be “very, very difficult for at least the next two weeks”.

Caerphilly Member of the Senedd Hefin David, said more than 600 people messaged him on Monday asking for clarity on what the lockdown meant.

People were concerned about whether gyms and leisure centres would be open, whether students could move to university halls of residence, and what it would mean for hairdressers and beauty salons.

“I am just trying to answer as many people’s questions as I can,” he told BBC Wales, adding that students would be fine to go off to university as it was classed as moving out of the borough.

“The biggest questions are about childcare”.

Mr David said he did not want to blame anyone for the increase in cases, as it was “human instinct” to want to socialise with other people.

He said many people had abided by the social-distancing rules in the area.

“We need to get back to how we were in the last six months,” he said.

As people reacted to the lockdown announcement, concerns were raised about the impact on shops in the area.

Ben Francis, of the Federation of Small Businesses in Wales, said: “The Welsh Government and Caerphilly County Borough Council must be prepared to take all necessary steps to guide and support businesses through this latest period of disruption and uncertainty.”

Community testing started in the county borough at the weekend. A total of 450 people were tested and 19 were found positive.

The positivity rate of 4% indicated that the virus was circulating in the community, the Welsh Government said.

One class of 21 pupils at St Gwladys Primary School in Bargoed must stay at home after a member of staff tested positive for the virus, although the school remains open.

Elsewhere, the Eden Centre said it is closing its soft play centres in Caerphilly and Blackwood due to the rise in cases.

Meanwhile, Great Western Railway has confirmed a member of staff in south Wales has tested positive for Covid-19, but has not specified where.

The train company said: “Close contacts of the affected have been self-isolating at home and given advice on signs and symptoms of Covid-19, along with details of how to arrange a test if they become unwell.”

No train services have been affected as a result of the diagnosis.

Giri Shankar, of Public Health Wales, appealed to everyone in the Caerphilly area to use a local testing unit at the town’s leisure centre if they were experiencing “even the mildest” of symptoms or feeling “generally unwell with no explanation”.

How many cases have there been in Caerphilly?

Caerphilly county has had more new cases in the past week – 98 – than anywhere else in Wales and more than the area has seen since the end of April.

The number of cases on Friday – 31 – was the highest in the county for a single day since the pandemic began.

The case rate for the past seven days – 54.1 cases per 100,000 people – is also one of the biggest increases in the UK, after Bolton and Rossendale in Lancashire and Hertsmere in south-east England.

Where there have been local interventions or lockdowns so far – mostly in north-west England and the Midlands – the case rate has been usually been between 70 and 90 cases per 100,000.

Birmingham was put on a “watch list” when it reached 31 cases per 100,000 but the issues were in particular neighbourhoods.