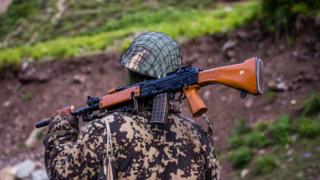 Image copyright Getty Images Image caption File photo of an Indian Border Security Force guard near the India-China border China has accused Indian troops of illegally crossing a disputed border and firing “provocative” warning shots at patrolling soldiers.Chinese guards were “forced to take countermeasures”, said a military spokesperson, though it is not clear what they…

Chinese guards were “forced to take countermeasures”, said a military spokesperson, though it is not clear what they were.

But India has denied the allegation, saying its troops did not cross the border and no shots were fired.

Relations between both countries have steadily deteriorated in recent months.

“At no stage has the Indian army transgressed across the Line of Actual Control (LAC) or resorted to use of any aggressive means, including firing,” India said in an official statement.

China’s allegation, if true, would be the first time in 45 years that shots were fired there, breaking an agreement barring firearm use.

According to state media outlet the Global Times, the Indian troops had “illegally crossed the Line of Actual Control (LAC) into the Shenpao mountain region near the south bank of Pangong Tso Lake”, quoting senior colonel Zhang Shuili, a spokesperson of the People’s Liberation Army (PLA).

India’s move “seriously violated related agreements reached by both sides, stirred up tensions in the region… and is very vile in nature,” said Mr Zhang.

But India’s statement added that the army was “committed to maintaining peace”, but it was also “determined to protect national integrity and sovereignty at all costs”.

It also put the blame back on the PLA, alleging that it often carried out “aggressive manoeuvres”.

A 1996 agreement between both countries bars the use of guns and explosives from the Line of Actual Control, as the disputed border is known, although soldiers have clashed there before.

The PLA spokesperson also called on the Indian side to “immediately stop dangerous moves, withdraw personnel who crossed the LAC… and punish the personnel who fired the provocative shot”.

The tense confrontation comes just one day after India’s military alerted Chinese officials of reports that five Indian civilians were kidnapped by Chinese troops from an area near the disputed border.

Tensions rose in June when 20 Indian soldiers were killed in a violent skirmish with Chinese forces. Local media outlets said then that the soldiers had been “beaten to death”.

In August, India accused China of provoking military tensions at the border twice within one week. Both charges were denied by China, which said that the border standoff was “entirely” India’s fault.

The Line of Actual Control is poorly demarcated. The presence of rivers, lakes and snowcaps mean the line can shift.

The soldiers on either side – representing two of the world’s largest armies – come face to face at many points. India has accused China of sending thousands of troops into Ladakh’s Galwan valley and says China occupies 38,000sq km (14,700sq miles) of its territory. Several rounds of talks in the last three decades have failed to resolve the boundary disputes.

The two countries have fought only one war so far, in 1962, when India suffered a humiliating defeat.