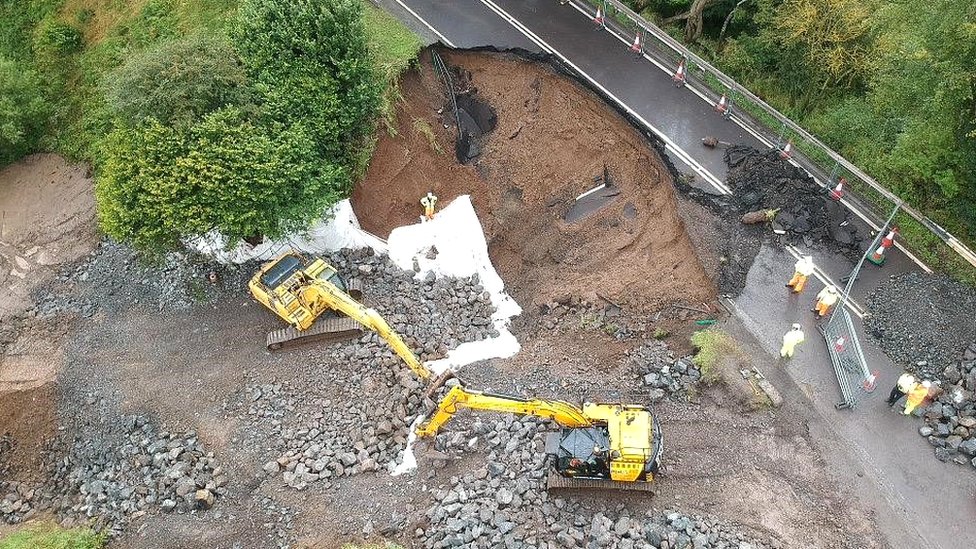 By Giancarlo RinaldiSouth Scotland reporter, BBC Scotland news websitePublishedduration9 hours agoimage copyrightBear Scotlandimage captionThe work has been completed on the A68 in about three-and-a-half weeksA series of images shows the scale of the operation to reopen a key route between the Borders and Edinburgh in under a month.Heavy rainfall on 12 August caused the closure…

A series of images shows the scale of the operation to reopen a key route between the Borders and Edinburgh in under a month.

Heavy rainfall on 12 August caused the closure of the A68, near Fala in Midlothian.

It appeared as if a massive bite had been taken out of the carriageway.

Andy Thompson of Bear Scotland said it had been a “real team effort” to get the route reopened in the space of about three-and-a-half weeks.

The first pictures of the collapse of about half the carriageway emerged after downpours swept across much of Scotland.

They showed significant damage to the important commuter route between the south of the country and the capital.

The road had to be closed immediately in both directions as there was no way to allow traffic to pass safely.

It came at almost exactly the same time as Bear Scotland was taking over responsibility for maintenance of the route from Amey.

Indeed, a number of those working on the project started with one employer and ended it with another.

What they were dealing with was the failure of a 20m (65ft) deep embankment below the road.

As a result, a full closure of the A68 was put in place, with a signed diversion route in operation.

Work started immediately on a three-phase project to get the road reopened.

The first stage saw the site “cleared and stabilised” before an initial 2,000 tonnes of rock was laid down.

Utility companies had to divert fibre-optic cables under the carriageway away from the work area before the embankment could be fully rebuilt.

That allowed phase two to take place as a further 3,000 tonnes of rock were used to rebuild the collapsed embankment back up to road level.

This continued around the clock despite the arrival of Storm Francis during the operations.

The final stage saw the construction of kerbing, road drainage, the footpath and the roadside safety barrier.

The surface layers of the new road were then laid down and road markings added.

Bear Scotland said each stage had been “carefully programmed and co-ordinated” to get the job done as quickly as possible “without compromising safety or quality of construction”.

Traffic management is currently in place but it is hoped to be removed by the end of the week.

That would allow the A68 to return to full operation in the space of an eventful month.

All images are copyrighted.