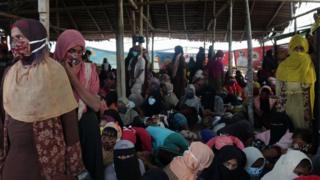 Image copyright EPA Image caption Rohingya refugees after disembarking from the boat in Indonesia Nearly 300 Rohingya refugees have landed in Indonesia, telling authorities they had been at sea for about six months.Police said fishermen spotted a wooden boat carrying the Rohingya several miles off the coast of Lhokseumawe city on Sumatra’s northern coast.The boat…

Nearly 300 Rohingya refugees have landed in Indonesia, telling authorities they had been at sea for about six months.

The Rohingya have for years been fleeing persecution in Myanmar for other south-east Asian nations.

The arrival in Indonesia was the biggest seen since 2015, said Chris Lewa, the director of the Arakan Project, a non-profit group focusing on the Rohingya crisis.

The refugees set sail from southern Bangladesh at the end of March or early April, bound for Malaysia, Ms Lewa said, but were turned back by both Malaysian and Thai authorities because of coronavirus restrictions.

She said the refugees may have been held hostage at sea for a period by traffickers demanding money before allowing them to disembark.

At least one of those aboard was rushed to hospital on Monday. “We have seen their condition is very weak at the moment,” said Oktina, a UN refugee agency co-ordinator, who like many Indonesians goes by one name.

Locals reportedly donated food and clothing to the refugees: “We’re concerned about their condition,” one resident, Aisyah, told the Reuters news agency. “They need help in the name of humanity… They’re human beings like us.”

About 100 Rohingya, mostly women and children, arrived in the same area in June in two groups, after what they said was a four-month sea journey during which they were beaten by traffickers and forced to drink their own urine to stay alive.

The refugees that landed in June and the arrivals on Monday may have been part of an estimated 800 Rohingya who reportedly left southern Bangladesh earlier this year, Ms Lewa said.

About 30 migrants in the original group were believed to have died at sea, she added.

The first port of call for many of the Muslim Rohingya fleeing Myanmar (also known as Burma) is neighbouring Bangladesh, where about a million now live in squalid conditions in refugee camps.

Traffickers have preyed on refugees there, offering passage to Muslim-majority Indonesia and Malaysia.