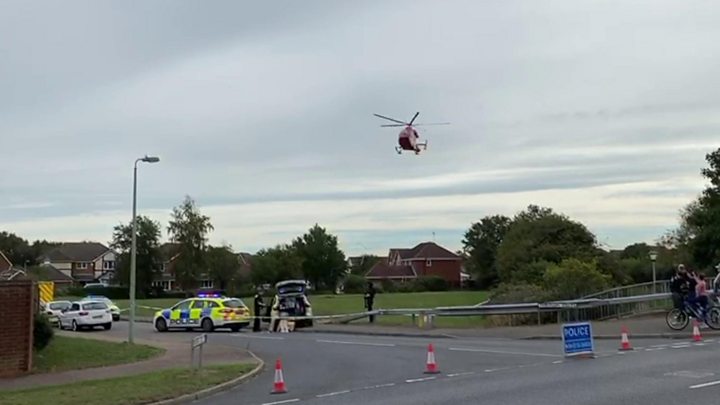 Media playback is unsupported on your device Media captionAn air ambulance was called to the scene A 15-year-old boy has been seriously injured in a shooting as he made his way to school.Officers were called just after 08:40 BST to the Grange Farm estate in Kesgrave, Suffolk, where a person was later seen receiving medical…

A 15-year-old boy has been seriously injured in a shooting as he made his way to school.

Officers were called just after 08:40 BST to the Grange Farm estate in Kesgrave, Suffolk, where a person was later seen receiving medical treatment.

Kesgrave High School said it had been told the incident involved one of its Year 11 students. The victim was taken to Addenbrooke’s Hospital in Cambridge.

Suffolk Police have arrested a teenage boy in connection with the shooting.

An Essex and Herts Air Ambulance landed on an area of grass and took off just before 10:00.

Police say they are treating the shooting “as an isolated incident” and they do “not believe there is any wider threat to the local community”.

“We have now made an arrest as part of the investigation and are working with our partners in Suffolk and our schools to ensure that everyone feels safe when they are collecting their children from school this afternoon.

“There will be more police officers on patrol and to provide reassurance in the area and I would ask for anyone with information about this incident to come forward.”

Eyewitness Andy Watts told the BBC he was out walking his dog when he heard a “a gunshot and then I heard a great big scream”.

“It sounded like scaffolding falling down originally because it was a big, big crash,” he said. “I saw them working on the young lad over on the green; he was over there for quite a while while they were attending to him, a lot of ambulance staff and paramedics working on him.”

Kesgrave High, which said the pupil was on the way to school at the time of the incident, said in a statement: “Students in school are safe and we are managing the situation in constant, close communication with the police.”

It said it expected students to be dismissed at the end of the school day at 15:20 as normal.

It is understood Monday was the first day back at school for its Year 11 pupils following the coronavirus lockdown and the summer holiday.

Friends Walk and Through Jollys have been closed off and there is a partial closure in Ropes Drive. Police have urged the public to avoid these areas.

A police cordon has also been put up nearly five miles (8km) across Ipswich in Westwood Avenue – though it is currently unclear whether this relates to the shooting.