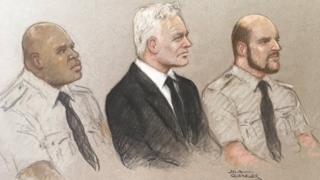 Image copyright Julia Quenzler for BBC News Wikileaks co-founder Julian Assange appeared in the dock at London’s Old Bailey as his fight against extradition to the US resumed.The 49-year-old, who has been in Belmarsh Prison for 16 months, is wanted over the publication of classified documents in 2010 and 2011.He told the judge at the…

Wikileaks co-founder Julian Assange appeared in the dock at London’s Old Bailey as his fight against extradition to the US resumed.

The 49-year-old, who has been in Belmarsh Prison for 16 months, is wanted over the publication of classified documents in 2010 and 2011.

He told the judge at the start of Monday’s hearing he does not consent to extradition – as new charges emerged.

If convicted in the US, he faces a possible penalty of 175 years in jail.

During Monday’s hearing, the court heard Mr Assange, an Australian national, was re-arrested minutes earlier on a new indictment issued in June, during lockdown, by the US government.

It contained 18 charges, including plotting to hack computers and conspiring to obtain and disclose national defence information.

Edward Fitzgerald QC, representing Mr Assange, said he had not seen his client in person for six months in part due to the pandemic – and he told the court the latest indictment had been made “at the 11th hour” without warning.

But a bid to rule out the new charges failed, with District Judge Vanessa Baraitser ruling they must be heard in the context of the extradition request.

“Julian Assange is the trigger, he is shining the light on all the corruption in the world.”

Mr Shipton said his son was being treated like a hardened criminal. He said: “Julian’s in a glass box, he finds it very difficult to hear anything. I can’t hear anything, I’m upstairs in the gallery.”

A mobile billboard van drove past featuring a “Don’t extradite Assange. Journalism is not a crime” slogan and a picture of his face.

The hearing will last four weeks and is expected to hear from witnesses, including academics who will give evidence on journalistic practices.

Mr Assange was jailed for 50 weeks in May 2019 for breaching his bail conditions after going into hiding in the Ecuadorian embassy in London.

He sought refuge in the embassy for seven years from 2012 until he was arrested in April 2019.

A previous hearing at Woolwich Crown Court was adjourned shortly before the coronavirus pandemic prompted the UK’s lockdown.