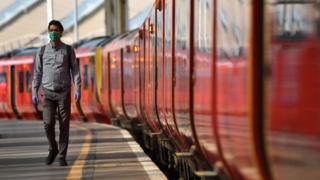 Image copyright Getty Images More train services in England, Wales and Scotland will run from Monday as schools reopen and people are encouraged to return to work.The Rail Delivery Group, which represents train operators and Network Rail, says around 90% services will be running.Rail passenger numbers are now back to about one-third of pre-pandemic levels.Operators…

More train services in England, Wales and Scotland will run from Monday as schools reopen and people are encouraged to return to work.

The Rail Delivery Group, which represents train operators and Network Rail, says around 90% services will be running.

Rail passenger numbers are now back to about one-third of pre-pandemic levels.

“Rail companies are doing everything they can to ensure people start the term with a smooth journey, including boosting cleaning, providing sanitiser at stations and offering better information about busy services,” she added.

Train operators across the country have designed the new timetable, taking into consideration potentially busy stations and parts of routes that will experience higher demand for travel by schoolchildren.

Where possible, more frequent services will be put on or extra carriages added to create more room.

Staff will also be on hand to explain the rules on wearing face coverings and maintaining social distancing to older children.

“Some train times will change so we’re asking people to check before they travel and plan their journeys for quieter times if possible,” said Ms Starr.

Over the coming weeks, rail bosses have a delicate balance to strike.

They want more passengers back on the network, but they don’t want a flood of commuters crowding trains and stations.

Up to now, passenger numbers have remained low – on average, about a third of what it was before the pandemic.

The railways are not going back to where they were before the pandemic. Some services won’t return. But in places, at certain times, more capacity will be created.

During the pandemic, the government has been covering the huge cost of running the railways without passengers.

So there is also a financial incentive for ministers that passengers return.

Train companies are now working to manage passenger flows by warning people if a particular service is busy.

Some modern trains, like those running on Southeastern and on Govia Thameslink, can monitor the weight load in carriages, allowing them to estimate the number of people on board.

Southeastern plans to share the data with passengers so they can avoid a specific train.

The Rail Delivery Group said that reducing the timetable during the coronavirus lockdown and then gradually increasing services again in phases had led to improvements in punctuality.

In particular, train operators and Network Rail had learned lessons about the effects of “wear and tear” on railway infrastructure, the effects “knock-on delays” caused to intensely used routes, and the time trains take at each station.

Call to return to work

At the end of August, the government launched an advertising campaign encouraging people to go back to the workplace.

Business leaders have warned of damage being done to city centres as people stay away from offices.

However, many employers have no plans to return workers to the office.

The BBC questioned 50 big employers ranging from banks to retailers to get a sense of when they expected to ask employees to return to the office.

One of the main reasons given for the lack of a substantial return was that firms could not see a way of accommodating large numbers of staff while social distancing regulations were still in place.